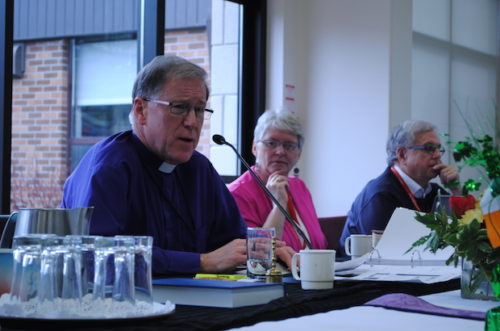 Archbishop Fred Hiltz says so much time and energy have been devoted to debate over human sexuality, at the expense of other issues such as violence against women and climate change. With him at the CoGS meeting head table are Cynthia Haines-Turner, deputy prolocutor, and General Synod chancellor David Jones. Photo: André Forget

[Anglican Journal] In his reflections during the last session of Council of General Synod (CoGS) for the last triennium, the primate of the Anglican Church of Canada expressed frustration that Anglicans have not exhibited the same degree of passion for human rights issues as they have for debates about same-sex marriage.

“I long for a time in our church when there is as much attention and conviction and passion and voice and action from the rooftops about sexual exploitation, about gender-based violence, human trafficking for the sex trade, missing and murdered Indigenous women, pornography, religiously based violence around the world, our violence against creation itself, and the greed and the reckless consumption that drives it,” said Archbishop Fred Hiltz.

“There are many of us who would say that we wish that we didn’t have to spend that much time [on the same-sex marriage issue], but in fact we’ve had to,” he said. Some, he noted, have criticized the church for spending an “inordinate” amount of time on the issue.

But despite his concerns over how much energy was going into discussions over same-sex marriage, Hiltz applauded the care and respect he felt CoGS had shown in its nearly two days of closed-door discussions about the proposed change to the church’s marriage canon to allow for same-sex marriage.

“I think…we were really working hard here at this meeting at trying to make room for one another,” he said. “There’s a place for everyone in the Anglican Church of Canada, so how do we work hard at making room for one another—that’s going to be the challenge, in part, at General Synod, too.”

At the end of its discussions, CoGS had unanimously agreed March 12 to send to the upcoming General Synod a draft resolution prepared by the Commission on the Marriage Canon changing the Anglican Church of Canada’s law to pave the way for same-sex marriage.

At the same time, however, CoGS said that while it is legally obliged by General Synod 2013’s Resolution C003 to send the same-sex marriage motion to General Synod 2016, it has also considered “the possibility of other options.”

In a message to the church,  CoGS said, “The General Synod may discern a legislative option is not the most helpful, and if so, we faithfully hope that through dialogue at General Synod an alternate way will emerge.”

CoGS did not indicate what these “other options”  might be, but the message was clearly a response to an earlier statement it received from the House of Bishops that a vote to allow same-sex marriage was “not likely to pass in the Order of Bishops.” In their statement to CoGS, the bishops had also questioned whether “a legislative procedure is the most helpful way” of dealing with the issue of gay marriage.  In a written response to the House of Bishops, CoGS asked “for some concrete examples of other options” to a legislative process.

He noted that despite this call from the primates, the Episcopal Church has indicated that it will send representatives to the upcoming Anglican Consultative Council (ACC) meeting in Lusaka, Zambia in April, and Hiltz said he expects they will participate as “full members.”

The provinces of Kenya, Uganda and Nigeria have announced that their bishops will boycott the meeting because of the American attendees.

Hiltz said that the Canadian church will be represented at the ACC by Bishop Jane Alexander of the Diocese of Edmonton, Suzanne Lawson, and Archdeacon Michael Thompson, the church’s general secretary, who will be standing in for Archdeacon Harry Huskins, who is unable to attend for health reasons.