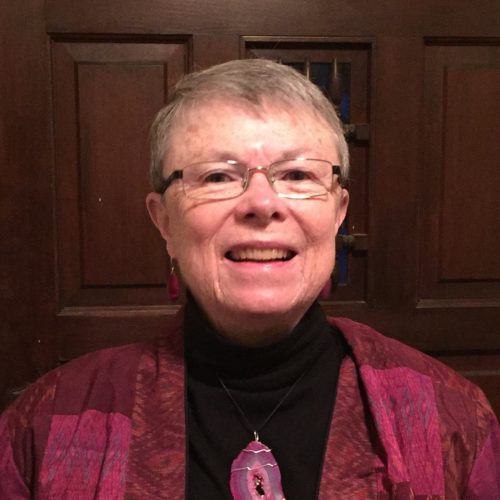 This obituary is published here.

Barbara Jeanne Hartley Schlachter died early Wednesday morning, February 17, after a battle with ovarian cancer. She was born August 10, 1945 to Jeanne Louise Sommer Hartley and Charles Beatty Hartley and grew up on the shores of Lake Erie on her grandfather’s fruit and vegetable farm. She attended elementary school in Huron and Centerville, Ohio and graduated from Huron High School in 1963. She graduated from Ohio Wesleyan University magna cum laude and Phi Beta Kappa in 1967. She did her graduate work at Columbia University and Union Theological Seminary, receiving an MA in history of religions in 1970 and her M.Div. in 1972. She received the Dr. of Min. degree in Ministry and Marriage and Family in 1988 from Eastern Baptist Seminary and was certified as a pastoral counselor by the American Association of Pastoral Counselors.

Visitation was held on Sunday, Feb. 21 at Trinity Episcopal Church at Gilbert and College Streets in Iowa City. The service of burial was held on Feb. 22 at 11 a.m., also at Trinity Church.

Barbara was one of the first women to be ordained to the Episcopal priesthood in 1977 and helped to found the Episcopal Women’s Caucus, serving as its first president. She served parishes in White Plains NY, Staatsburg NY, Troy OH and Cedar Rapids, IA. She gave her time to the church beyond the parish, serving both at the diocesan level and national level. Among other things she served on the Church Deployment Board, was the first ordained woman to serve on the Executive Council and chaired the Committee on the Status of Women.

She married the Rev. Mel Schlachter on Aug. 24, 1968, and they had two children, Erika Hartley Schlachter Sward, and Jacob Hartley Hanson Schlachter. She is survived by them and by their spouses, David Sward and Laura Hanson Schlachter, and two grandchildren, Matthew and Colin Sward, in addition to her sister, Suzanne Hartley.

After she retired from parish ministry, she continued her work as a pastoral counselor and spiritual director. She also went through training as a Healing Touch practitioner and saw her ministry in her later years as one of healer. Her final passion was the environment and healing the earth, especially climate change action. She was proud of being arrested at the White House for protesting the Keystone XL pipeline, and she co-founded Iowa City Climate Advocates and 100 Grannies for a Livable Future to educate, advocate and agitate about climate change.

She was a breast cancer survivor who successfully went through treatment and lived another 17 years cancer free and was diagnosed in February 2015 with ovarian cancer. She loved reading and the beauty of the out-of-doors, and most of all she loved her family and is grateful to them and to all her friends who supported her in her journey.

In lieu of flowers, donations may be made to either Iowa City Public Library Friends Foundation in memory of Barbara Schlachter to carry on her love for children and reading at 123 S. Linn St, Iowa City IA 52240 (www.icpl.org/support/donate), or to the Barbara Schlachter Fund c/o 100 Grannies for a Livable Future at 18 Valley View Knoll, NE, Iowa City, IA 52240.