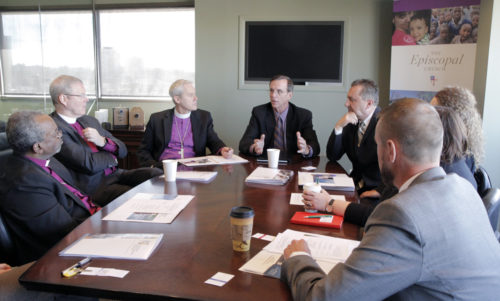 [Episcopal News Service – Denver, Colorado] In 2012, Ahmed and his family abandoned their lives in Homs, Syria, and fled across the border to Jordan where, without the ability to work and dependent on international aid for food, they struggled to survive.

Today, Ahmed, his wife, his parents and five additional family members, including a 2-year-old boy, are rebuilding their lives here with the help of the refugee and asylee programs offered by Lutheran Family Services Rocky Mountains, one of 30 refugee resettlement affiliates partnered with Episcopal Migration Ministries in 26 dioceses nationwide.

On Feb. 24, Ahmed (not his real name) and other family members met with Presiding Bishop Michael Curry, members of his staff, Colorado Bishop Robert O’Neill, and Bishop Jim Gonia of the Evangelical Lutheran Church in America-Rocky Mountain Synod. The family arrived in Colorado in December 2015.

Curry, who was scheduled to speak later in the day at the Consortium of Endowed Episcopal Parishes annual conference underway here, spent the morning at the Lutheran Family Services’ offices learning about the resettlement process and the current political climate affecting the process. It was his first visit to a resettlement affiliate since becoming presiding bishop.

“Those we call refugees are people who have lost their home and they’ve had to come to a country where the culture is different, the language is different and everything is different,” said Curry to Episcopal News Service at the close of the visit. “Through Episcopal Migration Ministries and other organizations like it, the church reaches out and welcomes them and makes sure that they can find a home here, and that is God’s work.”

Episcopal Migration Ministries, the Episcopal Church’s refugee resettlement agency, is one of nine agencies working in partnership with the U.S. Department of State to welcome and resettle refugees to the United States.

“We’re very excited that Bishop Curry was able to join us today to learn more about the work of Episcopal Migration Ministries and to hear firsthand from refugee families who are being resettled here, including the Syrian family who just arrived just a few months ago,” said Deborah Stein, executive director of Episcopal Migration Ministries in an interview with ENS. “To hear not only their stories of struggle in being resettled to the U.S., but also what their dreams for the future are now that they have a place to live in safety.”

Located in western Syria about 100 miles north of Damascus, Homs served as a base for some of the early uprisings against Syrian President Bashar al-Assad at the start of the country’s civil war, which has killed 250,000 people and forcibly displaced more than 11 million more. Ahmed and his family members preferred their real names be withheld for the safety of family members still living in the region.

The family lived in Jordan for three-and-a-half years before being resettled in the United States.

One thing they feared coming to the United States for resettlement is how they’d be perceived based on their religion by Americans, given the violence in Syria and the atrocities that are being committed by radical Islamists in the name of Islam, Ahmed explained. In fact, the reality of life in Denver has proved the opposite.

Since they arrived, they’ve felt safe and they’ve found Coloradans to be friendly, he said in Arabic through an interpreter.

The family’s fear also was grounded in the anti-immigrant, anti-refugee rhetoric sweeping across the United States.

Since last November, following the terrorist attacks in Paris, at least 30 U.S. governors have spoken against resettling Syrian refugees in their states, citing a concern for public safety, and city councils have proposed measures aimed at keeping Syrian and other refugees from resettling in their communities, explained Stein.

That’s not the situation in Colorado, however, where Gov. John Hickenlooper, has opened the state’s doors to Syrians. The Colorado Council of Churches commended Hickenlooper for his stance.

Lutheran Family Services, too, experienced some upset in the aftermath of the Nov. 13 Paris attacks, when its offices received “angry, hateful” calls from citizens reacting out of fear. But by Thanksgiving the calls “took a turn” and people began wanting to know more about the plight of refugees and how they could become engaged, said James Horan, vice president for refugee services.

In fact, since early December 2015 the number of people interested in volunteering increased to the point that there is now a waiting list.

Part of that has to do with the news coverage of Syrian refugees risking their lives to make it to Europe, and the increase in awareness. Even though the majority of refugees remain in the region, many more have attempted the dangerous journey by boat to Greece trying to reach other parts of Europe, where the crisis is becoming increasingly politicized.

In addition, Germany, which has received the most refugees, Canada and the United States have pledged to increase the number of Syrian refugees admitted.

Since the start of the Syrian civil war in 2011, the United States has received 2,800 Syrian refugees, explained Jim Barclay, president and CEO of Lutheran Family Services Rocky Mountains.

Lutheran Family Services Rocky Mountains became an affiliate of Episcopal Migration Ministries last October. For the fiscal year ending Oct. 1, 2015, LFSRM resettled 627 refugees, from places as diverse as Iraq, Eritrea, Somalia, the Democratic Republic of the Congo, Bhutan, and Cuba. This fiscal year, it plans to resettle some 850 refugees.

“We’re very excited now to be affiliated with Episcopal Migration Ministries and for the opportunity to engage their congregations with access to the refugees and to this welcoming ministry,” said Barclay. “And it really cannot be ministry without the people from the churches stepping up and acting on their faith to embrace newcomers.”

The resettlement agencies provide refugees with assistance, including cultural orientation, English as a second language and job readiness courses, as well as individual case management.

The resettlement agency provides services and referrals to other agencies, “from the day the refugees arrive at the airport until they are self-sufficient,” said Damir Basic, Lutheran Family Services’ division director who oversees the refugee and asylee programs, adding that the majority of refugees, many of whom arrive at the airport with limited skills and unable to speak English, have jobs within 90 to 120 days. “To take them from point A to point B is a tremendous amount of work.”

What refugees want is to rebuild their lives and become self-sufficient, and partnerships are needed to help them in that process, he said.

From the start, the United State’s refugee resettlement program has been a public-private partnership.

“There’s a lot of voluntary support,” said Barclay. He said some of that comes from congregations “that wrap around refugee families in the first four months that they are here from their arrival and assist them with acclimating and integrating into the community … (they) supply all manner of household furnishings and equipment, financial support and mentoring – and neighboring.” All of which, said Barclay, “is essential to successful transitions for refugees.”