[Episcopal News Service – Washington, D.C.] “We shall either learn to live together … or perish together as fools,” Presiding Bishop Michael Curry began a Feb. 8 address to members and guests of the National Press Club.

The words, spoken by the Rev. Martin Luther King Jr. during a 1964 speech in St. Louis, Missouri, serve as a defining quote for the 21st century, said Curry.

“The choice is ours, ‘chaos or community,’” said Curry, the latter words echoing King’s fourth and final book, “Where Do We Go from Here: Chaos or Community,” published in 1967. In the book, said Curry, it was evident that King was struggling with the future of the civil rights movement and how to lead a nation – potentially set on tearing itself apart – during a time of racial- and class-strife, and the Vietnam War.

Building on the theme, “the church’s role in creating a more inclusive society,” Curry shared his remarks with more than 30 people gathered in the Edward R. Murrow Room of the club’s headquarters.

A professional organization for journalists and communications professionals with more than 3,500 members, Curry spoke as part of the club’s regular Newsmaker series, or hour-long news conferences, in which congressmen, government officials, policy experts, organizational and influential leaders address members and respond to questions from the media. Former Presiding Bishop Katharine Jefferts Schori addressed the press club in 2008.

On Feb. 7, Curry preached at Washington National Cathedral during an afternoon Eucharist commemorating Absalom Jones, the first African-American to be ordained an Episcopal priest.

Curry told those gathered at the press club that he was surprised at his election as the first African-American presiding bishop and primate of the Episcopal Church during its triennial General Convention last June.

He said that his election wasn’t the only surprise, however, citing the Episcopal Church’s two mission priorities of evangelism and racial reconciliation adopted by that same General Convention.

“Those were two courageous acts, and I don’t think any of us really saw that coming either,” he said. “I suspect when you don’t see something like that coming that may well be a sign that some other variable is involved in the equation, which means the Holy Spirit has been messing with us…

“We came out of that convention with the Episcopal Church having made a commitment to what I call the Jesus Movement and a commitment to following in the way of Jesus of Nazareth, not exactly knowing how all of this is going to play out, but following in the way of Jesus of Nazareth which is the way of God’s love in this world. And doing it by a way of evangelism and a way that leads to racial reconciliation in our society and in our world.”

Curry said he is convinced that King’s 21st century call “to learn to live together as brothers and sisters, is tied up with the truth of this Jesus Movement and work of evangelism and racial reconciliation.” 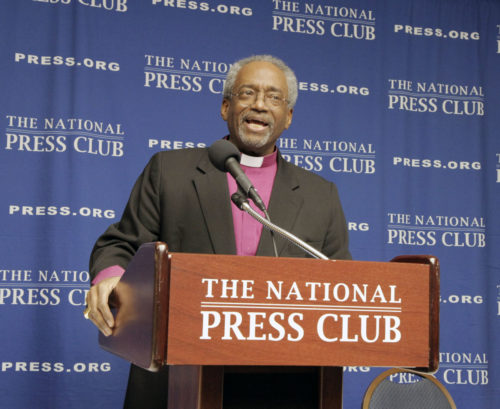 As British Rabbi Jonathan Sacks points out in his book, “Not in God’s Name: Confronting Religious Violence,” religious extremism is happening in Judaism, Christianity and Islam, and that more moderate, centrists voices are missing from the conversation. And the west has largely turned away from its former Judeo-Christian values, instead turning to the idols of the self: the market, consumerism, individualism.

“The golden calf of the self has been raised by the children of Israel in the wilderness again,” said Curry in support of Sacks’ belief. “That golden calf, that idol of the self, may well be the most destructive reality in human society. Self-centeredness, selfishness, call it what you will, frankly is a cancer that can destroy us all and left unchecked will destroy the planet.”

Curry is encouraged by Pope Francis, he said, in his popularity and his actions toward including everyone; he is modeling a “way of being that is the exact opposite of that self-centered, self-destructiveness, and therein lies the hope.”

Jesus, said Curry, had it all figured out, as clearly stated in Matthew 22, that the law and the prophets hangs on loving God and loving neighbor.

King, said Curry, understood that love is the way to create “beloved community.”

“If I love God with all my heart and all my mind, there’s no room for self-interest,” said Curry.

Curry spoke of evangelism and racial reconciliation in the context of the love of God and love of neighbor as a path to the “light of the world.”