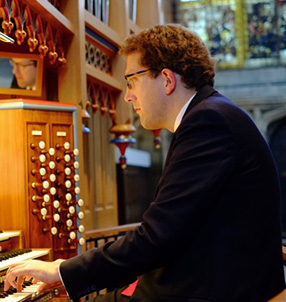 [St. Thomas Fifth Avenue] The rector, wardens, and vestry are delighted to announce the appointment of Professor Daniel Hyde as the 22nd Organist and Director of Music of Saint Thomas Church, Fifth Avenue, New York.

A Message from the Rector

“The Headmaster and I are thrilled with this appointment. The Search Committee has served the Church well and considered a large number of applications from around the world. The process was thorough and demanding, and I am delighted that there was a unanimous decision to offer the post to Daniel Hyde. Dan is a remarkable musician who already has an international reputation, a strong faith and a working knowledge and love of the liturgy of the Church, and we believe that he will be a worthy successor to John Scott. It is clear that Dan will fit well into our parish life, and we very much look forward to welcoming him this summer.”

Daniel Hyde is Informator Choristarum, Organist, and Tutorial Fellow in Music at Magdalen College, Oxford. He is also a University Lecturer in the Faculty of Music. A former chorister and organ scholar of Durham Cathedral, Daniel was Assistant Organist at Perth Cathedral, Western Australia, before taking up the organ scholarship to King’s College, Cambridge. Upon graduation from King’s with First Class Honors in Music, Daniel was appointed as Director of Music at Jesus College, Cambridge. During his time there, he was responsible for overseeing the development of the College’s two choirs and for the design and installation of a new organ in the chapel.

As an organist, he won second prize and the audience prize in the RCO Performer of the Year Competition 2002 and has since performed across four continents. Recent recital engagements have taken him to the USA, Germany, and Holland. He has also performed throughout Australia, including the Sydney Opera House and the Adelaide Town Hall. Closer to home, he has recently played in the St. David’s and Easter at King’s Festivals; St. Paul’s, Gloucester; Christ Church and Durham Cathedrals; Windsor Castle; Birmingham Town Hall; and the Wigmore Hall. He has been a concerto soloist with the BBC Philharmonic and the Britten Sinfonia, with whom he has performed the Poulenc Concerto a number of times, and has recorded the Hindemith Concerto to great critical acclaim. A disc of Christmas Organ Music from King’s was released in 2008. A regular accompanist to the BBC Singers on Radio Three, he has appeared at the BBC Proms on numerous occasions and made his solo debut there in the 2010 season performing Bach’s Canonic Variations on the organ of the Royal Albert Hall. As an ensemble player, he has appeared with the Britten Sinfonia, the Aurora Orchestra, the Gabrieli Consort, and the Academy of Ancient Music.

Since moving to Magdalen College in 2009, he has often collaborated with the viol consort Phantasm, with whom he has given concerts and broadcasts at Wigmore Hall and in Vienna and Finland, as well as recording for Linn Records. Formerly Director of Cambridge University Chamber Choir and the locally based Harlow Chorus, Daniel was more recently Assistant Director and Accompanist to the London Bach Choir. Increasingly in demand as a conductor, he has worked with the Britten Sinfonia, the Orchestra of the Age of Enlightenment, the Academy of St Martin in the Fields, the City of London Sinfonia, the Players of the Orchestra of the Sixteen, and the International Baroque Players. In Oxford, he has collaborated with the Philomusica and has also engaged Oxford Baroque to join Magdalen College Choir on numerous occasions.Magdalen College Choir enjoys an exclusive recording contract with Opus Arte, the label of the Royal Opera House.

Recent and forthcoming engagements include concerts at the London Oratory, the St. Albans International Organ Festival, and summer festivals in Germany, Finland, and Edington. In 2014, he gave a recital as part of the RCO annual conferment of diplomas, the occasion at which the College marked its 150th anniversary. In the academic year 2014/15, he gave a series of recitals celebrating the inauguration of the new Dobson organ at Merton College surveying the complete organ works of J. S. Bach.