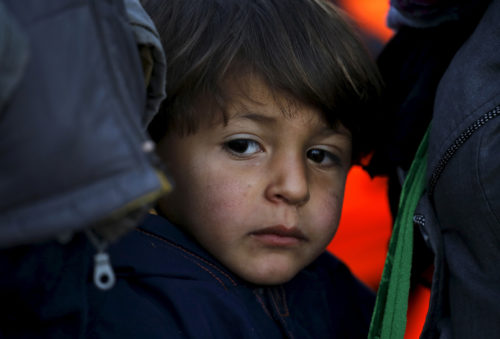 A Syrian refugee boy is seen shortly after arriving at a beach in a raft overcrowded with migrants and refugees in the Greek island of Lesbos, Nov. 20. Balkan countries have begun filtering the flow of migrants to Europe, granting passage to those fleeing conflict in the Middle East and Afghanistan but turning back others from Africa and Asia, the United Nations and Reuters witnesses said on Thursday. Photo: Yannis Behrakis/Reuters

[Episcopal News Service] After three years in a Jordanian refugee camp, the Syrian family of four – soon to be five – arrived Nov. 12 at the Los Angeles International Airport with the few possessions they’d stuffed into suitcases and bags.

Awaiting them was a welcome team from All Saints Church in Pasadena, and Raffi Manser, a caseworker for the Interfaith Refugee and Immigration Service.

The church is partnering with IRIS, a program of the Episcopal Diocese of Los Angeles and one of about 30 affiliate agencies of the Domestic and Foreign Missionary Society’s resettlement service, Episcopal Migration Ministries, which has resettled refugees nationally for more than 75 years.

With no family or friends in the United States, no established credit or employment history, locating and furnishing housing for the new arrivals present a huge challenge, Manser said.

That’s where All Saints stepped up to help, stocking the apartment, located in Azusa about 15 miles east of Pasadena, said Juliana Serrano, senior associate for peace and justice. “Through our welcome team, we secured donations to make their move-in possible. They arrived to a fully furnished apartment with pantry and refrigerator filled with grocery items.”

She said the congregation’s “journey in this began before Friday and the attacks in Paris. Where it began for us was with those tragic images of Syrian refugees fleeing their country by boat, and the shocking, disturbing, grotesque image of that young boy floating to shore” on Sept. 3.

“At that point, we began considering among ourselves what was going to be our response,” said Serrano.

That resolve is unchanged, despite a climate of fear sparked by the Nov. 13 attacks, which killed at least 129 and wounded many others. “We stand on the other end of the spectrum, saying we welcome these individuals and we welcome these families,” Serrano said. “We acknowledge that these refugees are not the Islamic extremists that have participated in these attacks. They are also people who are suffering from this extremism and are victims of this extremism themselves, and need someone to stand up with them and to stand up for them.”

Calls for justice amid a climate of fear

More than half of U.S. governors may plan to reject Syrian refugees, but Episcopalians are pushing back, saying welcoming the stranger now is more crucial than ever before.

Wendy Johnson, communications manager for Episcopal Migration Ministries, said 175 people participated in a Nov. 19 webinar to explore how Episcopalians can be involved; another webinar is planned for Nov. 23.

“We need to make our voices heard,” said Episcopal Migration Ministries Director Deborah Stein during the webinar. She noted that the U.S. House of Representatives on Nov. 19 passed by a vote of 289-137 a measure that could limit resettlement and prevent Syrian and Iraqi refugees from entering the country. Forty-seven Democrats joined the vote. President Barack Obama has said he will veto the bill, should it pass the Senate. 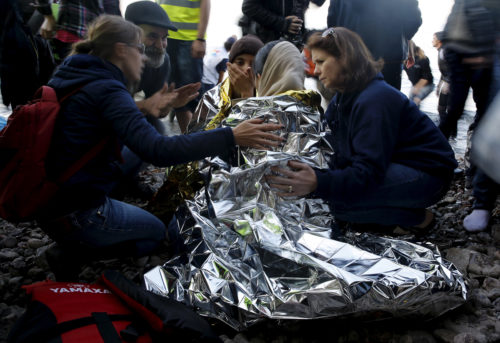 Volunteers try to comfort a pregnant Syrian refugee shortly after arriving by a raft on the Greek island of Lesbos, Nov. 17. Photo: Yannis Behrakis/Reuters

A Nov. 19 White House Tweet at #RefugeesWelcome noted that, while the United Nations High Commissioner for Refugees has referred 23,092 Syrian refugees to the U.S. Refugees Admission Program, the Department of Homeland Security has interviewed just 7,014 since 2011. Since fiscal year 2011 only 2,034 Syrian refugees have been admitted to the United States Of those, none have been arrested or removed on terrorism charges.

Stein said she’d heard from local affiliates that the climate of fear sparked by the Paris attacks has caused some refugees to fear for their safety in the United States. “We’re concerned they’re not being welcomed and it’s re-traumatizing to them.”

But Episcopal Church Presiding and Primate Bishop Michael B. Curry counsels “Be Not Afraid” and elsewhere in the church bishops are speaking up, urging public officials to honor moral and ethical values, and encouraging constituencies to recall their faith roots.

Massachusetts Bishop Alan Gates, along with Suffragan Gayle Harris, and Western Massachusetts Bishop Doug Fisher, joined other faith leaders in defying Gov. Charlie Baker’s decision: “We are prepared to welcome and support Syrian refugees,” according to the Nov. 18 letter sent by the Massachusetts Council of Churches.

“Our churches are in every single city and town of Massachusetts,” the letter continued. “We believe in a commonwealth and a nation that lives out of our deepest values, not our fears. We welcome the opportunity to meet with you and strategize for the resettlement of those fleeing violence in Syria.” 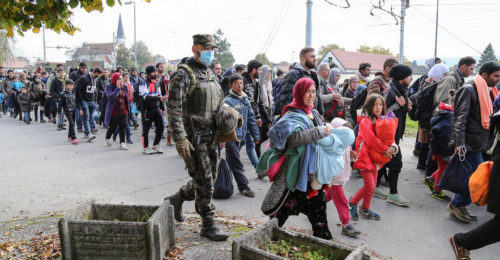 Refugees and migrants, mostly from Syria, Afghanistan, Bangladesh and Pakistan, pass through Slovenia on their way to Germany, Oct. 23. Photo: Robert Cotič via Wikimedia Commons

Arizona Bishop Kirk Smith disputed Gov. Doug Ducey’s authority to limit, not just Syrians, but all refugees from entering the state. “We Christians cannot give into the kind of thirst for vengeance that seems to be sweeping through our country in response to the ISIS attacks in France, Egypt and Lebanon this week,” he said. “We have a long biblical tradition of aiding the homeless and the refugees.”

Similarly, Eastern Michigan Bishop Todd Ousley called Gov. Rick Snyder’s “attempt to block acceptance of refugees beyond the authority of his office … a fear-based reaction to a very complex set of political and humanitarian concerns. As Christians in the Episcopal tradition, our love of God compels us to love our neighbor and Jesus teaches us that acts of mercy demonstrate our own neighborliness.”

Fort Worth Provisional Bishop J. Scott Mayer also encouraged politicians “to stay grounded in the power of the Holy Spirit and in the promise of our Lord Jesus.”

“I urge Episcopalians to find ways to help the refugees in your communities. Pray for them. And let your hands be the hands of Jesus. Let your smiles show the welcoming love of Jesus, your courage in the face of fear model the courage of Jesus, your quiet confidence that all will be well shine like that of Jesus. For like Mary, like you and me, the refugees carry within themselves the image of God, a God waiting to be born again this Christmas.”

Interfaith Refugee and Immigration Service: Many ways to assist

For IRIS’s Manser, the hours are long and unpredictable but rewarding. He counts his November caseload at 10, not including the cases he still oversees from previous months.

The new arrivals are young and old; families of five, single individuals, elderly couples. Some are Christian, some Muslim, from Iraq, Iran, Afghanistan, Syria, some displaced for years, some from camps or urban areas, all awaiting the opportunity to begin again.

“Each refugee has his or her own story” and is assisted by IRIS caseworkers for 90 days, receiving cultural orientation and English language classes, and transportation, job training and search assistance, physical and mental health assessments, case management, and social and other local services.

Three years ago Manser, 32, had just arrived from Baghdad.

Fluent in English, Turkish, Kurdish, Armenian and Arabic, he soon began volunteering at IRIS, assisting other refugees with stories similar to his own. His own story, the only one he is comfortable sharing, includes helping with the U.S. Army in Iraq. Eventually, he received a special visa through the U.S. Embassy.

IRIS Executive Director Meghan Tumilty said the agency, also an affiliate of Lutheran Immigration and Refugee Service and Church World Service, resettled 378 refugees from October 2014 through September 2015. “About 75 percent were Iranian religious minorities with U.S. ties,” she said. Others included refugees from Iraq, Afghanistan, Cuba and the former Soviet Union.

The agency is projected to resettle 530 refugees in the current fiscal year, including some from Syria. She said that about 50 percent of the Syrian population has been displaced; more than 4 million Syrian refugees are in Turkey, Lebanon, Jordan, Iraq and other countries. 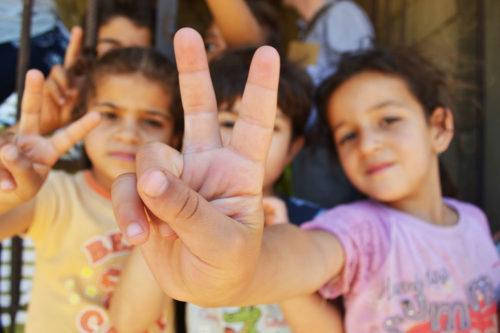 Syrian refugee children at a half-built apartment block near Reyfoun in Lebanon, close to the border with Syria, give the peace sign. The families fled Syria due to the war and are now living on a building site. Photo: Eoghan Rice/Trocaire via Wikimeida

About 76 percent are women and children “so about 2 million children have lost everything they have,” Tumilty said.

Like All Saints, communities of faith may partner to help furnish apartments, but there are many other ways to support refugees, including transportation to and from appointments, tutoring, sharing meals, donating backpacks or other gifts and often continuing the relationship beyond the anticipated six months.

Those interested in volunteering are asked to connect with local affiliates, which can be found on the Episcopal Migration Ministries’ website. Additionally, educational and informational resources available to congregations include “Called to Transformation” through Episcopal Relief & Development.

“It’s important as Episcopalians (that we welcome) the stranger,” Tumilty said.