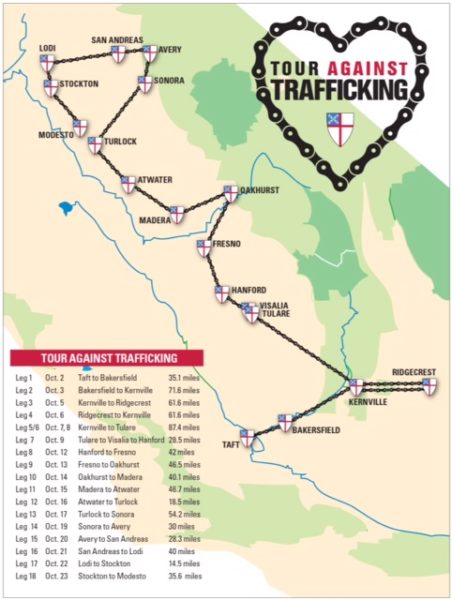 “My husband was on his way to church and he saw this young girl, running from a hotel with no shoes on; it was a red flag to him,” she told the Episcopal News Service the next day.

“He pulled the car over and talked to her; she turned out to be a victim of human trafficking. We were able to get her help and to get her to a safe place,” said Cisneros, herself a trafficking survivor.

Cisneros is featured in the documentary film, “The Trafficked Life”. It highlights a series of interviews with survivors and is a cornerstone of the Episcopal Diocese of San Joaquin’s Oct. 2-23 bicycle Tour Against Trafficking, to raise awareness and funds to halt trafficking in California’s Central Valley, according to Bishop David Rice.

Shortly after his 2014 election, Rice realized “the Central Valley of California was a thoroughfare and significant vein for human trafficking” yet few seemed aware of its existence or the human devastation, he said.

Common forms of human trafficking use fraud, force and coercion to pigeonhole people into migrant work or sexual situations for profit.

The former New Zealander tackled the issue with, in the language of the indigenous Maori, a hikoi – an intentional physical movement with a purpose, bringing together church and community groups to raise awareness and funds to tackle solutions.

For Rice, an avid bicyclist, a bike tour across the diocese seemed natural. So far, 40 riders have signed up to log all or part of the 18-day, 745-mile trip from Taft through the Sierras to Modesto.

Cyclists of all levels have the option to participate in one or all of the legs of the route, including 26 stops at each of the diocese’s parishes and missions, and to select which of six local anti-trafficking organizations they wish to support.

Filmmaker Michael Fagans said “The Trafficked Life” documentary has been screened across the diocese, along with participation from panels of local activists. “Community by community, we’re seeding the ground so that, when the tour comes, we’re not having to educate people,” Fagans told ENS. “Their hearts have already been touched.”

Trafficking, “cuts across all economic strata, across race,” added Fagans, who also is joining the tour as a rider. The film and tour have drawn ecumenical as well as “church-broad” support from other dioceses and to date has raised about $13,000.

But statistics about the prevalence of trafficking typically “are difficult to come by,” said Cisneros. “We’re talking about an underground criminal organization.” But, it is estimated there are about 300,000 youth in the United States who are minors and at risk for being exploited sexually, she said.

The California Attorney General’s office in 2010 estimated that some 12.3 million people globally are trafficked, or are modern-day slaves, with less than one percent of the victims being identified.

Cisneros said that from the age of 7 to 16 years she was sexually trafficked to strangers by her father, a preacher. At 16, she left home and was able to seek help from relatives in another state, she said.

“Sexual abuse breaks you down and completely distorts your thinking,” she said. “I was very fearful; I didn’t trust people at all.” Through the assistance of friends and local anti-trafficking groups, she fought her way back, and recently earned a bachelor’s degree in psychology.

A member of the steering committee of the Kern Coalition Against Human Trafficking, one of the six groups participating in the Tour Against Trafficking, Cisneros said her goal is to raise awareness that it “is a very real problem and people can be part of the solution.”

Everyone should be armed with a toll-free trafficking hotline number to offer to someone who appears to need help, she said. It also helps to pay attention to signs that might indicate a trafficking situation.

“Traffickers have a network of people they work with and, if everyone of us gets educated, we can be a part of the anti-trafficking network,” she said. “The wider our network is, the more victims we’re going to be able to help.”

Rice agreed. “The language I’ve adopted is ‘unawareness equals complicity,’ ” he said. “Our task is to raise awareness of difficulties people face, and … the crimes that are committed and have to be addressed.”