[Episcopal News Service – Gulf Coast] It was Sunday; just six days after Hurricane Katrina had ripped a swath of death and destruction across the Gulf Coast of Louisiana and Mississippi. It was time for church.

No matter that Katrina had wiped the building known as St. Mark’s Episcopal Church in Gulfport from its Gulf-side lot. The Rev. James “Bo” Roberts had not missed a Sunday service since he became rector of the then-123-year-old church in April 1969 before Hurricane Camille knocked the building of its foundation about the same time in August of that year.

And so, on Sept. 4, the Sunday of Labor Day weekend, the particle board sign along debris-strewn Church Avenue just north of sand-covered East Beach Boulevard read “Here! Mass 9:30 Bring Chair.”

Roberts, a Gulf Coast native, rode out Camille in his home but nearly died. He stayed for Katrina, too.

“The reason I stay is because you cannot get back after the storms,” he told reporters that Sunday morning after Katrina. “I wanted to be where I could check on my people and be available to them. Should any of them have died, I wanted to be here for that circumstance also.”

Hurricane Katrina hit land along the Gulf Coast twice on Aug. 29, once near Buras, Louisiana, just after 8 a.m. local time with maximum winds estimated at 125 mph, and then near the Louisiana-Mississippi border about three hours later with slightly reduced winds. The storm caused a storm surge of 24 feet to 28 feet along the Mississippi coast and 10 to 20 feet along the southeastern Louisiana coast. In Mississippi, the surge damage extended at least five miles inland and as much as 10 miles along coastal rivers and bays. 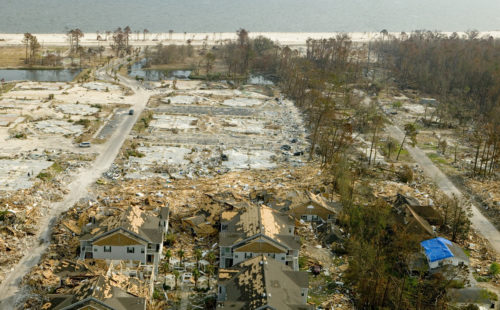 The Rev. Christopher Colby, who was rector of Trinity Episcopal Church in Pass Christian, Mississippi, when Katrina tore away all but the church building’s frame and destroyed four other buildings, recalls saying the 8 a.m. Mass on Aug. 29 “wondering what was going to be left and feeling this incredible fear.” He and some parishioners tried to remove as many things as possible from the campus before they evacuated.

“We were staring down the barrel of the gun,” said the Rev. Wayne Ray, who was then the rector of St. John’s Episcopal Church in Ocean Springs, Mississippi

The wooden Gothic church building “withstood all the fury of Katrina,” but their home was destroyed by 18 inches of water and three huge fallen oak trees.

Almost as worse as the physical damage was the “enormous sense of betrayal” many eastern Gulf Coast residents felt about the body of water that was almost part of the family and from whom many made their living, according to the Rev. Dennis Ryan, former rector of St. John’s Episcopal Church in Pascagoula, Mississippi, which was badly damaged but not destroyed in the storm. “All of the sudden this sibling that had nourished us turned against us and killed us, literally killed us,” he said.

Even today, many people believe “that body of water cannot be trusted 100 percent and when the indications are there to get out, you better get out,” he said.

Then-Mississippi Bishop Duncan Gray III and his Louisiana counterpart at that time, then-Bishop Charles Jenkins, spoke by phone soon after the storm. “I only had some vague information, but I thought we’d lost several churches – didn’t know how many” Gray recalled recently. “And you said ‘Well, I think we’ve dodged the bullet.” 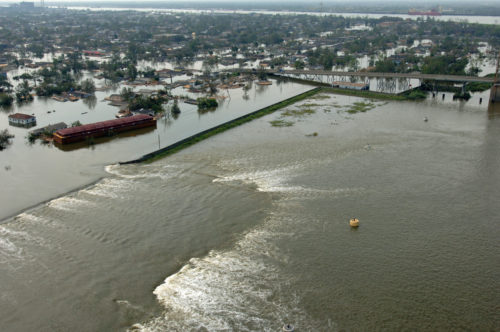 More than 50 breaks in the levees that hold water out of New Orleans caused 80 percent of the metropolitan area to flood on Aug. 29, 2005. Photo: Jocelyn Augustino/Federal Emergency Management Agency

“Right,” Jenkins said. “Then of course, the levees broke. And the city flooded.

“And in that moment, I felt as if my ministry had been washed away..

There were nearly 50 breaches in the levees meant to protect the New Orleans metropolitan area, from the surrounding water. By Aug. 31, nearly 80 percent of the city and its eastern suburbs were covered by as much as 20 feet of water that did not drain out until into October.

The world witnessed televised images of the horrific desperation of the 10 to 20 percent of the city’s residents who either could not or would not evacuate as the governmental response to the storm faltered at disastrous levels.  The storm exposed the city’s racial divides in new ways. Two years after the storm, Time magazine reported that the charges of racial discrimination that cropped up during the botched response to Katrina still lingered. 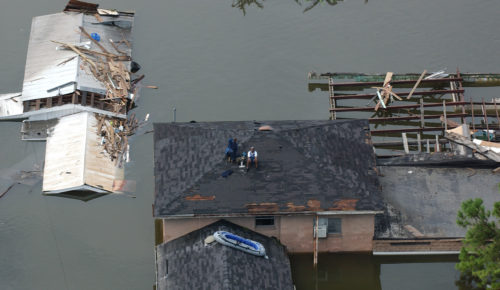 Thousands of people sat on New Orleans rooftops on Aug. 30, 2005, pleading to be rescued after levee failures flooded the city with as much as 20 feet of water. Photo: Jocelyn Augustino/Federal Emergency Management Agency

Katrina was one of the most devastating hurricanes in U.S. history, according to the National Hurricane Center, and the deadliest hurricane to strike the country since the Palm Beach-Lake Okeechobee hurricane of September 1928. Katrina was directly responsible for approximately 1,300 deaths in Louisiana (the majority were people older than 60 years) and 200 in Mississippi, a center report said. It was the fourth- or fifth-deadliest hurricane in U.S. history, after the hurricane that hit Galveston, Texas, in 1900 and killed an estimated 8,000, and the Palm Beach-Lake Okeechobee with more than 2,500 deaths. The National Oceanic and Atmospheric Administration says two 1893 hurricanes killed close to the same number of people as did Katrina.

The Episcopal Church went into action as the storm began barreling north into the interior of the United States. Episcopal Relief & Development immediately sent emergency funds to the Dioceses of Central Gulf Coast, Louisiana, Mississippi, and Western Louisiana to support immediate needs such as food, shelter and medical supplies. 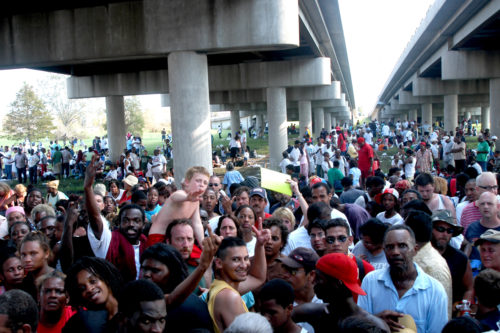 While it is estimated that more than 1 million people left New Orleans in the days before Hurricane Katrina, between 100,000 and 200,000 could not or would not leave. They were stranded when relief efforts failed. Photo: Win Henderson/Federal Emergency Management Agency

Robert Radtke, Episcopal Relief & Development president, had begun working for the organization the month before and was not then, by his own admission, an expert on disaster response. He and the staff monitored the storm’s progress, contacting potentially impacted dioceses ahead of time. “Katrina was absolutely beyond anyone’s imaginations,” he said recently.

Louisiana Bishop Jenkins called Radtke, asking him to come be with him in Baton Rouge north of New Orleans where diocesan staffers were attempting to regroup.

“This was unprecedented. Episcopal Relief & Development is not a boots-on-the-ground sort of operation,” Radtke said. “We weren’t then and we really aren’t today in many ways, but I followed my instinct, which was to go and be with him.”

In the days ahead, the organization helped the diocese build a response. “Those relationships we built there continue to this day,” he said.

Dioceses, congregations, individual Episcopalians and Anglicans from all over the Anglican Communion began asking what they could do to help. Some of the relationships formed across the church, relationships that cut through geographic and theological boundaries, exist to this day, 10 years later.

Jenkins called the outpouring “incredible,” made even more so by the fact that Katrina hit two years after the Communion was rocked by the General Convention’s decision to recognize that same-sex blessings were a part of the church’s life and its official assent to the Diocese of New Hampshire’s election of an openly gay and partnered priest, Gene Robinson, to be its bishop.

Jenkins called outpouring of help “incredible,” and added the givers were not asking if their intended recipients were politically, theologically or liturgically liberal or conservative.

“I don’t want us to forget the generous outpouring not only of The Episcopal Church and the tens of thousands of volunteers who came here,” he said. “We are a family. We are a family that sometimes disagrees and disagrees vehemently, but, frankly, when the chips are down, we’re still family.”

Gray agreed, adding that in 2006 each of the six Mississippi congregations that lost their buildings raised the percentage of their giving to the diocese because “they had experienced what it meant to be one church, connected in the ways Charles mentioned.

“When we are broken there is an access to grace that we don’t know in strength and suddenly grace begins to permeate every part of our lives and the judgmental part of me is broken as well as the church is broken,” he said.

As the extent of Katrina’s wrath became clear, the Episcopal News Service began its coverage of the church’s response. ENS reporter Matthew Davies was at St. Mark’s in Gulfport on the first Sunday after the storm. The video above comes from footage he recorded that morning.

Today and for the next week, ENS is looking back at Katrina and tracing how the church’s response to the storm has evolved over the last 10 years, and how that ministry has helped transform the communities the church serves.