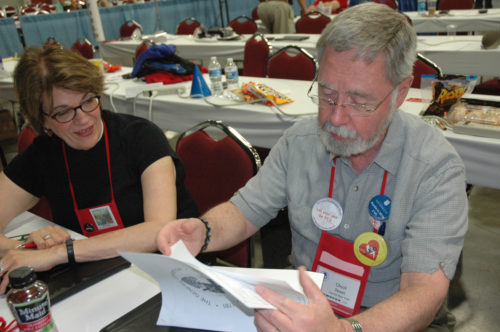 [Episcopal News Service – Salt Lake City] The Joint Standing Committee on Program, Budget and Finance (PB&F) July 1 proposed a budget for The Episcopal Church in the 2016-2018 triennium that includes a major new $2 million initiative on racial justice and reconciliation, even as it reduces the amount of money it asks dioceses to contribute to 15 percent by 2018.

The committee presented the budget to a joint session on July 1. Both the House of Bishops and the House of Deputies must approve the budget, agreeing on any changes supported by one house or the other.

Presiding Bishop Katharine Jefferts Schori called the session to prayer. “We are gathered here to consider how best to use the resources you have given us for the work of your healed world. Keep us open in heart and mind and spirit that we may discern the leading of your spirit.”

Diocese of Maine Bishop Stephen Lane, PB&F vice chair, told the joint session that the budget process, jointly designed by PB&F and Executive Council, was “collaborative and friendly [and] … was good for PB&F and good for the church.”

The budget is available as a PDF here in English and Spanish.

The impetus for the budget’s racial justice and reconciliation initiative came from Resolution C019 that calls on the church to respond to systemic racial injustice. It asks for $1.2 million for that work.

“It was the sense of the (PB&F) committee that given the atmosphere we’re living in now the shootings and the plight of African-American men, that we wanted to do more,” the Rev. Mally Lloyd of Massachusetts, PB&F chair, told ENS the day before the budget was presented. “Give them $2 million and a blank slate to really try something new for the church that we hope will have major impact.”

Lloyd said the committee decided to leave the dimensions of the work “for the movement of the spirit” to guide the church’s leaders.

The $2 million will come from the Domestic and Foreign Missionary Society’s short-term reserves and is part of the $4.7 million surplus with which the 2013-2015 triennium is predicted to end.

“We’re taking a risk as a church that we don’t have an emergency that would call on those reserves,” Lane told ENS. “We’re seeing this as an extraordinary circumstance and an extraordinary opportunity and, therefore using extraordinary means to support it.”

The budget assumes $76.6 million in commitments from the church’s dioceses (line 2), about $2.1 million more than was projected in the current triennium. Nearly 62 percent of the budget’s revenue comes from pledges by the church’s dioceses and regional mission areas. The actual diocesan giving in the current triennium is forecast to amount to $79.3 million. 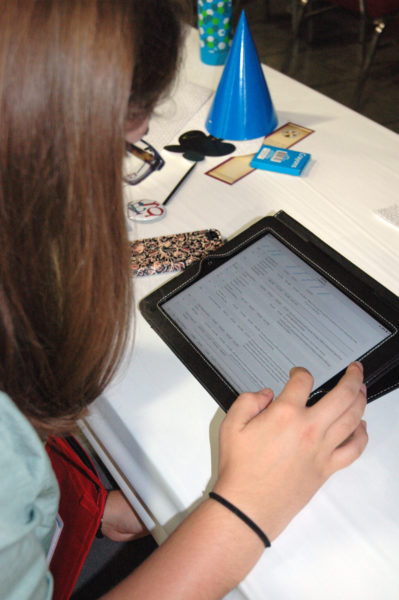 PB&F’s proposed budget increases that exemption to $150,000. Its revenue projection is based on asking the church’s dioceses and regional mission areas to give 18 percent of their income to fund the 2016 budget, 16.5 percent for the 2017 budget and 15 percent in 2018.

Lloyd and Lane said that PB&F felt the Executive Council’s draft 2016-2018 triennium budget was based on solid research when it came to predicting how diocesan giving would respond to a reduced asking. Lane said he and Ohio Bishop Mark Hollingsworth, who chaired the council committee that drafted the budget given to PB&F, also conducted an informal poll of bishops whose diocese did not meet the 19 percent asking.

“We found complete support for the 15 percent goal,” he said. “We found substantial commitment on the part of those below 15 percent to move in that direction over the triennium. I have confidence that the 15 percent objective is solidly supported by the bishops of the church.”

Lloyd added that she believed there are some dioceses “for whom this 15 percent will never be reachable.” However, she said, council’s planned Diocesan Assessment Review Committee will help those dioceses’ “realistic” percentage contributions be seen as “full participation” in funding the church-wide budget, rather than feeling penalized and criticized for not paying the full asking.

The budget’s revenue is calculated on the assumption that the approximately one-third of the dioceses that pay 19 percent or more will decrease their contributions to match the annual asking, as will those who now pay between 19 and 15 percent.

Those dioceses that give less than 15 percent are predicted to increase their annual giving by a minimum of 10 percent of their giving each year. Thus if a diocese is paying 9 percent, it will increase its giving in the first year to 9.9 percent and so forth.

The diocesan commitments revenue projection is also based on income earned at the diocesan level growing by a half percent, according to the notes in line 1.

Despite pending resolutions calling for the assessment to drop to 15 percent immediately, Lloyd said the committee rejected such requests early on. “We felt it was too deep a drop too quickly and it would present the new presiding bishop with some tough choices to make that didn’t seem fair his first year,” she said.

The diocesan asking is not a canonically mandated assessment and the Task Force for Reimagining The Episcopal Church called in its final report for such a move. The House of Deputies considered substitute Resolution D013 (which would take the place of its original version and those of A008, A110 and A111) and would, among other things, change the voluntary diocesan asking to a mandatory assessment. PB&F does not have the authority to make the asking mandatory.

Out of 109 dioceses and three regional areas, 49 dioceses paid the full asking or more in 2014. A list of 2013 diocesan commitments and payments made, and 2014 commitments, is here.

The budget revenue also includes a 5 percent draw, or dividend, on the income from the Domestic and Foreign Missionary Society’s approximately $220 million in unrestricted invested assets. The draw amounts to $28.2 million, compared with $24.5 million anticipated in the current triennium (line 3).

In addition to diocesan payments, the 5 percent draw and the short-term reserves draw for the racial justice program, other major income line items include nearly $10 million in rental income from The Episcopal Church Center, $2.1 million from Episcopal Migration Ministries’ refugee loan collection program, a $1.1 million draw to support the development office and $1.2 million in General Convention income, along with other smaller sources.

Spending in the 2016-2018 budget is structured around the Anglican Communion’s Five Marks of Mission, as is the current budget.

To conform to canonical requirements to designate spending in the areas of canonical, corporate and program, each expense line is coded to one of those three categories, and the budget’s enabling resolution, which does not yet have a number, summarizes the spending in that way.

Program expenses are funded at $64.3 million, corporate at $35.2 million, and canonical $22.5 million. The amounts for each category in each year are specified in the budget resolution.

There are four kinds of grants in the proposed budget:

Other highlights in the budget:

Lloyd and Lane said they were extremely appreciative that so many resolutions with funding implications began moving through convention very early, thus helping the committee’s budget process.

“The hardest thing in an operating budget is to reserve funds for new work and I am particularly gratified that Program, Budget and Finance has been creative and aggressive in seeking ways to pool resources and so this budget does have significant new work in it in the midst of trying to be true to the program and structure of The Episcopal Church,” Lane said.

Any changes in that structure enacted by General Convention “might mean that Executive Council will have to take the budget that we pass and rework it to a greater extent than it ever has had to before,” Lloyd acknowledged.

PB&F had to operate under the current canons, she said, and could not anticipate canonical changes.

“We knew all along that even if restructuring had passed on Day 2, the canons wouldn’t take effect until Jan. 1 so we had to produce a budget based on the old canonical model,” she said.

The committee said in a narrative it presented along with the budget spreadsheet that it is grateful that: PB&F members were involved in creating the process Executive Council used to develop its draft budget; how members were welcomed into every council meeting; and how council shared the feedback it solicited from the church at large.

“The collaborative approach taken by Executive Council produced a cogent and balanced budget,” the committee said in its narrative. “However, a budget so tightly balanced does not permit easy changes. Large allocations in response to legislation are even harder to come by.”

PB&F’s narrative suggests that council consider allocating an undesignated block of $2 million to $5 million in its 2019-2021 draft budget to give PB&F greater flexibility in responding to “the needs and the priorities of the General Convention.”