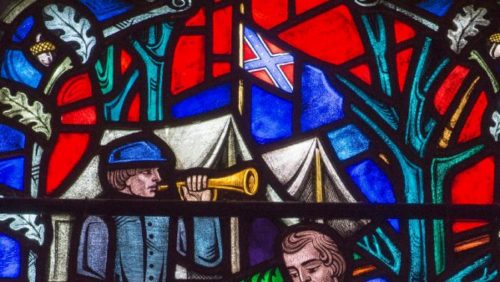 The Very Rev. Gary Hall, dean of the Washington National Cathedral, has vowed to remove the stained glass window bearing the Confederate flag.

[Episcopal News Service – Salt Lake City] The House of Deputies on June 29 approved in an overwhelming voice vote Resolution D044, which “strongly urges all persons, along with public, governmental, and religious institutions, to discontinue the display of the Confederate battle flag.”

The deputies join a growing number of people in sacred and secular organizations calling for discontinuation of the flag, including U.S. President Barack Obama.

Obama called for the flag’s removal while eulogizing the Rev. Clementa Pinckney, one of nine African-Americans killed during a Charleston, South Carolina, Bible study by a self-described white supremacist.

In recent weeks the Very Rev. Gary Hall, dean of the Washington National Cathedral, has also vowed to remove images of the Confederacy from the cathedral, the official seat of the presiding bishop.

Deputy Betsy Baumgarten of Mississippi urged the house to support the measure, noting that symbols “help to shape our belief and our continued understanding of God and the world. To continue to allow the Confederate flag to have a place in our churches says something about The Episcopal Church.”

While acknowledging that the symbol is for some a sign of their heritage, “for many more it has and continues to be a symbol of slavery, racial injustice and violence – and now more than ever, a sign of the white supremacist movement. The Confederate Battle Flag has no place in a church that calls all baptized persons to respect dignity of every human being.”

The resolution went a step further, challenging “us to get out of our churches and engage our public and government institutions in a conversation about such a toxic symbol of hate having any place in our current civic life,” she said when presenting the measure to the house.

Several other deputies, including the Rev. Susan Haynes of Northern Indiana and the Rev. Canon Victoria Heard of Dallas, also urged approval.

Recently, the Very Rev. Anthony P. Clark, dean of the Cathedral Church of St. Luke in Orlando, Florida, said in a statement that, after removing flags for cleaning, he would not return the Confederate flag to the cathedral proper, according to the Rev. Jabriel Ballentine.

“If the church is to be one like it’s supposed to be, then this is a divisive issue,” said Ballentine, 34, rector of St. John the Baptist Church in Orlando. “How can we be authentic unless we do everything we can to uproot it from ourselves?

“If one group is saying they’re not bound by the prayers of the people, when we pray that we all may be one, what are we really saying?”

Baumgarten said that removal of the flag “is only a step in starting the hard conversation we need to have about racism, and about acceptance of diversity in dismantling institutions that tear down some while lifting up others.

“It shows that The Episcopal Church is on board with the conversation that is happening on a national level right now,” Baumgarten said.

“As a deputation from Mississippi, we felt we needed to speak to this issue. But it isn’t just our issue. We call on the whole church as the people of God to join with us to remove this symbol of hate and oppression and to work towards bringing equality to all people.”

— The Rev. Pat McCaughan is a correspondent for the Episcopal News Service and part of the ENS team reporting on the 78th General Convention.