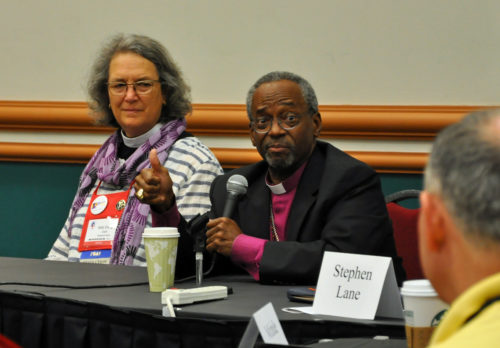 “I talk of the Jesus movement, of evangelism, of making disciples and our witness through public service and public advocacy,” Curry told the committee during a brief conversation during a 7:30 a.m. meeting. “That can sound like rhetoric that has no actual consequence, but let me assure you … we are talking about the church moving forth, taking evangelism seriously – in the Episcopal way but taking them for real because there is good news to share. There really is.”

Personal service and public witness and advocacy “is what we do; that’s the Jesus movement,” Curry said.

The presiding bishop-elect, who reminded the committee that his term does not begin until Nov. 1, said PB&F is doing God’s work. He likened the members’ job to that of Peter and Paul, whose feast day the church celebrates on June 29, saying that as word of Jesus spread out from Jerusalem to Rome and then to the known world at that time, the leaders had to organize themselves and decide how they would share their resources.

“They had to have their own PB&F to figure out how their distributions and their funds would be used to change the world,” Curry said. “The work they did in the first century is the work you’re doing in the 21st century. God bless you.”

Curry said the committee has the tough job of figuring out how the Jesus movement can “translate into concrete, practical reality in terms of the budget.”

“Put Jesus up front. Put sharing that good news in front. Put forming our people as followers of Jesus – as disciples for real – at the front of it,” he suggested. “And then put inspiring and enabling them to serve in their personal lives, and for us to witness in the public square in the front. That’s the church; that’s the movement. I know full well that movements can float off into the air if they are not incarnated in reality.”

Nebraska Bishop Scott Baker asked Curry if he sees specific changes in the church’s structures that PB&F could accomplish through the 2016-2018 triennium budget it is crafting for convention to consider. The presiding bishop-elect, in turn, asked PB&F chair the Rev. Canon Mally Lloyd of Massachusetts whether the committee had been talking to convention’s Legislative Committee on Governance and Structure.

She told Curry “we’re kind of caught in the cracks” between having to follow the rules that govern PB&F’s work and hoping to get what she called a “road map” from convention’s debate on structural change about how those changes will be accomplished over the 2016-2018 triennium, “and release Executive Council to mess with the budget that we have to present.”

General Convention approves the triennial budget, and the council often revises the three annual budgets, based on changes in income and expenses.

Curry, who served on the Task Force for Reimagining the Episcopal Church, said he does not know what convention will decide about structural changes. “But there may be some creative ways to pre-stage some of those creative possibilities … so that council can pivot when it needs to – that may be the wisest kind of thing to do going forward,” he said.

“The more creative space there is, the more the possibilities of a big system like this pivoting quickly and engaging what it needs to,” he said.

B&F member David Quittmeyer of the Diocese of Central Gulf Coast asked Curry if he had any particular pivots points in mind to which the committee ought to pay attention.

“I don’t know what’s going to hit the floor and what we’re going to end up with at the end of the day,” Curry said, adding that the “critical part” will be which dimensions of TREC’s recommendations “have the capacity to serve this movement we’re talking about.”

Curry suggested that PB&F members ask themselves “what will enable the church-wide community to energize and equip our diocesan and local communities to really engage in evangelism.”

He asked them to consider “changes that are going to facilitate our being able to ramp up quickly and engage evangelism seriously.”

PB&F is considering how to adapt Executive Council’s balanced $120 million draft 2016-2018 triennium budget that was passed in January. Council’s draft budget was compiled after the church’s committees, commissions, agencies and boards filed their reports to convention containing funding resolutions. Some of those requests have been amended here at convention. Plus, many new resolutions filed since council passed its budget also ask for money to be included in the 2016-2018 budget. PB&F must decide how to fund all the requests that are before convention.

PB&F will use the comments it has received from two hearings and from committee sessions during which it heard from Episcopalians it invited to discuss their budget line items, council’s draft budget and any legislation passed by or being considered by General Convention to create a final budget proposal. That budget must be presented to a joint session of the Houses of Bishops and Deputies no later than the third day before convention’s scheduled adjournment. According to the draft convention schedule, that presentation is set to take place at 2:15 p.m. MDT on July 1.