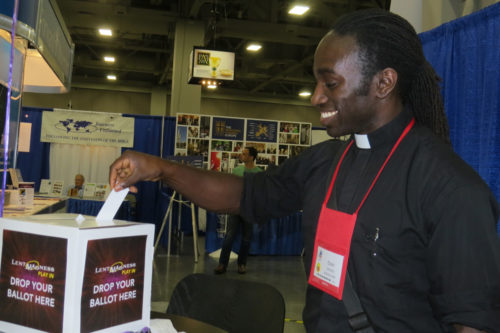 [Episcopal News Service – Salt Lake City] Heard of Christmas in July? At General Convention, it was Lent in Pentecost in the Exhibit Hall.

Lent Madness is the brainchild of the Rev. Tim Schenck, a sports-loving Massachusetts priest who reasoned that basketball fans shouldn’t have all the fun and that the penitential season of Lent needed livening up. Inspired by the annual March Madness college basketball tournament, in 2010 he created a bracket of saints who square off against each other in rounds of competition for the “Golden Halo” award. Each day of the competition during Lent, participants can read about two saints from The Episcopal Church calendar of commemorations and vote for their favorite to advance to the next round.

Lent Madness extended its growing reach in 2012 when it partnered with Forward Movement under the auspices of its executive director – and Schenck’s good friend or “archnemesis,” depending on what mood they’re in when you ask them – the Rev. Scott Gunn. Together, they form the Executive Committee for the Lent Madness phenomenon, which has garnered attention across the country and beyond.

For the second General Convention in a row, the Forward Movement booth has hosted a Lent Madness Day, allowing enthusiasts to vote onsite or at the website (www.lentmadness.org) for a saint to be the first to join the next Lent Madness bracket.

June 25’s competitors, Chad of Litchfield and Clare of Assisi, were chosen with “as much thought as goes into any one of our matchups,” Schenck said. “Of course the reason that it’s Chad vs. Clare is because there’s so much voting going on at General Convention that we want to acknowledge the possibility of hanging chads. Also, as the bishops and deputies are here, we’re praying for Clare-ity as they discern the issues of the day.” 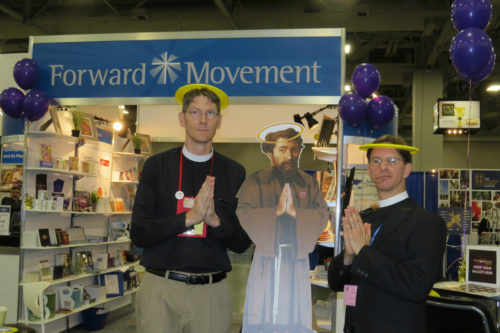 The Rev. Scott Gunn, left, and the Rev. Tim Schenck – the dynamic duo behind Lent Madness – strike a saintly pose with the winner of the 2015 Golden Halo, St. Francis of Assisi, in the Exhibit Hall at General Convention in Salt Lake City. Photo: Sharon Sheridan / Episcopal News Service

The display included a life-size cardboard likeness of the 2015 Golden Halo winner, St. Francis of Assisi, and some of his animal pals. These provided ample opportunity for saintly selfies – often posed with Lent Madness fans wearing their own Frisbee-esque halos.

While Clare was influenced by Francis, they were not related, so Schenck said he doubted association with last Lent’s winner would give her an edge in voting.

“I don’t think there’s a whole lot of nepotism at work here,” he said, “but the Assisi lobby is pretty powerful.”

Not everyone caught the day’s bracket fever. Schenck tried to explain the competition to Karen Ford of Tempe, Arizona, but she declined to vote.

“I’m not a sports person,” she said. “I don’t understand sports terminology.”

Edwin Johnson of the Diocese of Massachusetts admitted he’d always been a Madness observer. “I comment on other people’s brackets.”

But for Lent Madness Day, he took the plunge and cast his first ballot. “This is easy,” he said. “Clare of Assisi all the way. Otherwise my wife would kill me.”

Heather and Matt Stone of Longmont, Colorado, first caught the madness at their home parish of St. Stephen’s, where the annual bracket is posted in the narthex and voting recommendations make their way into the Sunday announcements.

“We were a little upset when Charles Wesley won [the Golden Halo] two years back, but it all was rectified with St. Francis,” Matt Stone said. “He was our favorite from the beginning.”

As relatively new Episcopalians, they’ve enjoyed the opportunity to learn more about Episcopal saints as well as experience the Lent Madness humor, he added. “It really just makes Lent a special time.”

The Rev. Jean Collins said her small Montana congregation similarly enjoyed the annual competition. “You learn about saints you never knew about.”

Schenck’s creation is an ingenious combination of Lenten discipline, competition, fun and Christian formation – “not necessarily in that order,” Gunn said. Teaming up with him for Lent Madness “was an opportunity for Forward Movement to have more fun.”

“Forward Day by Day readers are sometimes very serious,” he said. The Lent Madness connection has “changed our perception in the church in a good way.”