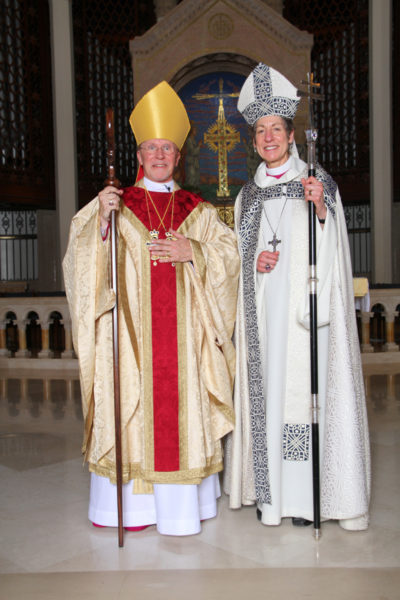 Eaton will be the fourth bishop of the Southeast Florida, succeeding the Rt. Rev. Leopold Frade, who will retire in January 2016 after 16 years of service to the diocese.

Over 1,200 people witnessed the service in person at the cathedral and via live stream video from a nearby hotel. Bishops from all over the country and the world attended the service. A historic occasion, this was the first time four bishops from churches in full communion with The Episcopal Church and the Anglican Communion participated in a service and together were co-consecrators of an Episcopal bishop. The Old Catholic Churches of the Union of Utrecht in Europe, the Mar Thoma Syrian Church of Malabar in India, the Evangelical Lutheran Church in America and the Moravian Church in North America were all participants.

Presiding Bishop Katharine Jefferts Schori led the service as chief consecrator and the Rt. Rev. Stephen Conway, the bishop of Ely, and one of Eaton’s classmates at Cambridge University, preached. The ecumenical representation from Christian churches from around the world made this consecration a significant event within The Episcopal Church. Frade recognized the significance of their presence as they greeted the crowd. A representative of the Armenian patriarch of Jerusalem and the ecumenical patriarch of Constantinople processed along with other leaders of the church. “We have come here from the holy city of Jerusalem to participate in this holy day and our happiness increases greatly to see the day when Peter has been made a bishop,” said the representative of theArmenian patriarch.

Other interfaith and ecumenical representatives were the Roman Catholic bishop of Palm Beach, the archbishop of Miami, and the Greek Orthodox patriarch of Jerusalem.

At the end of the service, guests cheered the consecration choir for their joyful, melodic voices, which brought most to their feet. The group included choristers from parishes around the Diocese of Southeast Florida. The music for the day, which included traditional songs in Spanish, French and English, also included special arrangements by several organists and the choir’s conductor, Matthew Steynor.

The Rt. Rev. Peter David Eaton will be enthroned on Jan. 30 at Trinity Cathedral in Miami.

— Altoria White is director of communications for the Diocese of Southeast Florida.