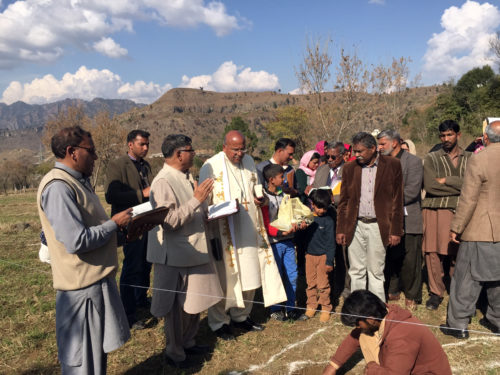 The Very Rev. Patrick Augustine, rector of Christ Episcopal Church in La Crosse, Wisconsin, lays the foundation stone for a new Christian church near Muzzaffarabad during a recent solidarity visit to Pakistan.

[Episcopal News Service] Pakistan is one of the world’s most troubling epicenters for terrorism where minorities are targeted by religious extremists for having different beliefs or affiliations. Yet the persecuted Christian community – 1.5 percent of 180 million people – remains steadfast in faith despite the daily persecution they face.

Last month, two bomb blasts in a Christian neighborhood of the Pakistani city of Lahore killed 17 people and wounded more than 70 as worshipers attended Sunday Mass at St. John’s Roman Catholic Church and Christ Church, a Church of Pakistan church and a member of the Anglican Communion.

“Messages of love and support have flooded in, and churches and agencies around the Anglican Communion are working together to ensure an effective and coordinated practical response as well as continued prayer,” according to a news release from the Anglican Alliance, which connects and strengthens the development, relief and advocacy activities of churches, agencies and networks of the Anglican Communion.

On a recent conference call with representatives of Anglican Communion churches and agencies, Bishop Irfan Jamil of the Diocese of Lahore talked about the priorities for his church and community after the bombings.

Jamil and his team have been visiting the bereaved and those injured by the bomb blasts, the release said. Episcopal Relief & Development has sent a solidarity grant to enable the church to respond to those in need following the attacks.

The Church of Pakistan (United) and the Roman Catholic Church held a joint funeral service for the victims. Archbishop of Canterbury Justin Welby joined the service by phone and his prayers were translated and shared with the mourners.

“Bishop Jamil inspired those on the [conference] call with his emphasis on the role of church leaders in building peace, harmony and mutual understanding and with his message to the Anglican Communion to continue to stand alongside the Church in Pakistan in these times of trauma,” the release said.

The most devastating attack in Pakistan happened in September 2013 when two suicide bombers targeted All Saints Anglican Church in Peshawar at the end of a Sunday worship service, killing 127 people and injuring 170. Many of the victims were women and children.

Bishop Samuel Azariah of the Diocese of Raiwind, moderator of the Church of Pakistan, spoke with Episcopal News Service shortly after that tragic day, saying that even after years of intense persecution from religious extremists, the Christian population in Pakistan is growing in numbers. “Nothing will dampen our spirits. Bombing, murder, burning, shooting will not dampen our spirits and our commitment to Jesus Christ,” he said.

Bishop of Peshawar Humphrey Peters said in an Easter message last week that the terrorist attacks “have left a permanent scar on the memory and soul of the Christian community of Pakistan … On the one hand, all these threats, incidents of violence and targeted persecution dishearten the Christian community of Pakistan. But on the other, it has strengthened the faith and … their commitment of faithfulness with Lord Jesus Christ.”

It was this resilience and deep faith that the Very Rev. Patrick Augustine experienced when he visited Pakistan earlier this year as an expression of solidarity with the Christian community there. 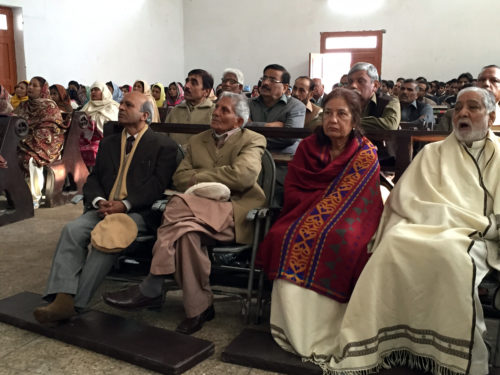 Members of the congregation at All Saints Anglican Church in Peshawar.

The Pakistan-born rector of Christ Episcopal Church in La Crosse, Wisconsin, preached during Sunday worship on Jan. 25 at the now-heavily guarded All Saints, built in the ancient bazaar of the old city Peshawar in 1865. He found a church that is thriving and full of faithful Christians. “I was touched by the power and commitment of their faith,” he told ENS.

“The terrorists believe they have a cause to impose Islam by violent force, beheadings and detonating explosives to kill those whose belief systems differ,” he added. “Suffering is everywhere and it has overwhelmed our humanity.” 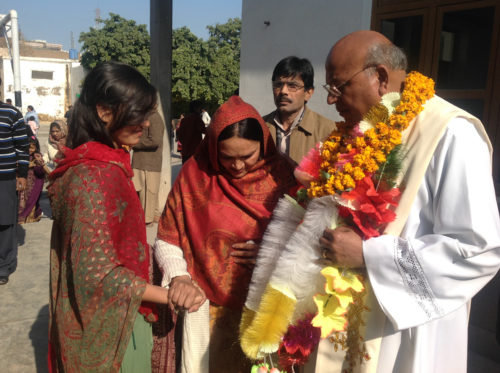 Following Sunday morning worship at All Saints Anglican Church in Peshawar, the Very Rev. Patrick Augustine prays with a family that lost several relatives in the bomb blasts of September 2013.

There is the prominent case of Asia Bibi, a Christian woman and mother of five who was arrested in June 2009 after being accused of insulting the Prophet Muhammad – which she denies – and sentenced to death by hanging. She is still in a Pakistani jail despite almost 1 million people worldwide appealing for her release. Some blasphemy charge cases receive high profile in the media, but thousands more go unreported.

Pakistani blasphemy law identifies it as a crime to defile the Holy Quran, with a possible sentence of life imprisonment. But offenses against the Prophet Muhammad may be punishable by death.

“This draconian law is a sword hanging over every Christian’s head. Once accused, the individual is at risk from zealous Islamists who believe that they earn merit with Allah by killing a blasphemer,” Augustine said. “Thousands of innocent people have been imprisoned and killed on false charges of blasphemy.”

Augustine lamented the inaction of the Pakistan government, which, he says, “has allowed extreme Islamic groups to propagate hate … violence, intolerance and spread extreme ideas into ordinary mosques and community centers.”

But Augustine – who in 2012 was awarded the Cross of St. Augustine by former Archbishop of Canterbury Rowan Williams in recognition of his contributions internationally to evangelism, ecumenism, and peace and reconciliation between faiths – said that “people want peace. We live in a world fashioned by God so that we all need one another as members of the human family. There are people of goodwill among both Christians and Muslims. I beg all people of goodwill to speak out and not fall prey as silent spectators.”

The Episcopal Church’s Executive Council at its March meeting passed a resolution condemning the use of religion for the purpose of advancing political agendas “directed at terrorizing, victimizing, and oppressing individuals and communities and impairing their ability to enjoy basic human rights because of their religious beliefs and social, ethnic, class, caste, gender, and national affiliations.”

The resolution also calls on the world’s governments “to confront the reality of religious persecution, protect religious minorities and civilians within the framework of international and humanitarian law, address political exclusion and economic desperation that are being manipulated by the forces of extremists, scale up humanitarian and development assistance to host countries and trusted NGOs, and accept for resettlement a fair share of the most vulnerable people where return to their countries of origin is impossible.”

The Rev. Canon Robert Edmunds, Middle East partnership officer for the Domestic and Foreign Missionary Society, said: “We sometimes hear the term ‘Christian presence’ in the Middle East and it sounds passive and lacking in vitality when the truth of the matter for those who live there is quite different. The Christian presence throughout the region is about Christians whose family and religious roots reach back to the time of Christ. These are not sojourners in a strange and foreign land, but people whose lives are an integral part of the landscape, the history, the culture and the traditions which have and continue to shape each generation.”

The presence of the Christian churches throughout the region “provides the language of love of God and all neighbors which is in danger of being silenced,” Edmunds added. “We in the West must continue to give these atrocities visibility both in terms of solidarity with our brother and sister Christians, but to encourage political leaders to seek lasting and durable solutions for peace for the benefit of all. To lose the Christian voice in the region would be catastrophic for the future.”

Augustine’s friends, family and parishioners expressed concern about him visiting Pakistan at such a volatile time. But on his journey, Augustine said that he found countless signs of hope and unexpected surprises. 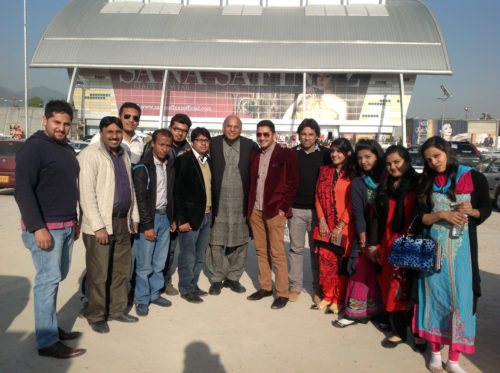 The Very Rev. Patrick Augustine with youth leaders of the Diocese of Peshawar, some of whom were injured and lost family members in the bomb blasts at All Saints Anglican Church.

One early Sunday morning in February, Augustine and 20 Christians from Islamabad drove for four hours to be with a Christian family near Muzzaffarabad. The family has been living there since 1933, but they are the only Christians in an otherwise exclusively Islamic area. Augustine described it as a deep privilege and a historical day as he relayed how he was asked to celebrate Holy Communion and preach, then lay the foundation of a church that will seat 50 people.

On his first day of arrival in Islamabad, he visited a tailor’s shop with a friend. One of the Muslim brothers who run the shop asked Augustine to pray for him. When Augustine told him that he prays in the name of Jesus the brother said that he had no objection to that.

As he was about to leave, the other two brothers approached Augustine and asked him to pray with them also. “I looked at them and saw in their eyes hunger for God for healing and blessing,” he said. “I laid my hands on them and asked God to bless them, their shop and bless Pakistan to be a land with peace. This was an amazing opportunity to experience in a land where Christians are discriminated and persecuted on daily basis.”

Two days later, Peters, the bishop of Peshawar, received a phone call about an attack by a Muslim mob on a Christian-run school in the city of Bannu. The school has 1,800 students and 99 percent are Muslim. Peters and four clergy decided to leave immediately and Augustine was invited to accompany them. “It is a highly security-sensitive area and not many Americans would be able to make this dangerous journey. It was a privilege to go … and stand in solidarity with a suffering church,” Augustine said. 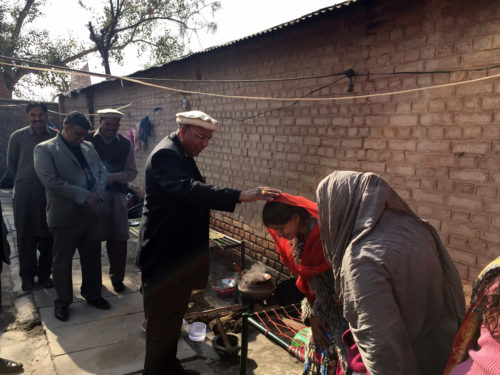 The Very Rev. Patrick Augustine prays with the displaced Christian community in Bannu.

Inside the compound, there were 200 Christian families internally displaced from the Waziristan area, a stronghold of Al-Qaeda and Taliban forces and the region where American drones have targeted terrorists.

“One million are internally displaced,” Augustine said. “Christian families were living in refugee camps … and not given food and shelter. It has been an Anglican area since 1860s. The bishop invited Christians to pitch tents inside the church compound where the school and hospital are situated. They are able to provide education and medical help to Muslims and Christians in this city.

“I spent one whole day visiting these displaced people, listening to their stories, holding hands and praying with them. … I did not get a sense that these people were ready to give up their faith, but that they were very strong, deeply rooted and committed to following Jesus in the way of the cross.”