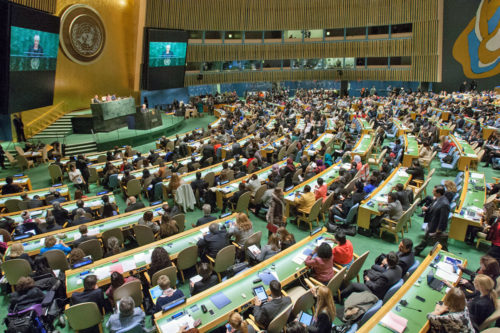 Participants gather in the United Nations’ General Assembly Hall during the opening of the fifty-ninth session of the Commission on the Status of Women (CSW). Taking place at UN headquarters from March 9-20, the session will review progress made in the implementation of the Beijing Declaration and Platform for Action, 20 years after its adoption at the Fourth World Conference on Women in 1995. Photo: United Nations

[Episcopal News Service] More than 100 Anglicans are heading to New York for the 59th Session of the United Nations Commission on the Status of Women (UNCSW), meeting March 9-20.

During the commission’s annual two-week session, representatives of U.N. Member States, civil society organizations and U.N. entities gather at the U.N. headquarters in New York. They discuss progress and gaps in the implementation of the 1995 Beijing Declaration and Platform for Action, the key global policy document on gender equality, and the 23rd special session of the General Assembly held in 2000 (Beijing+5), as well as emerging issues that affect gender equality and the empowerment of women. Member States agree on further actions to accelerate progress and promote women’s enjoyment of their rights in political, economic and social fields. The outcomes and recommendations of each session are forwarded to the U.N.’s Economic and Social Council for follow-up.

The commission is due to adopt a political declaration on the occasion of the 20th anniversary of the Fourth World Conference on Women in Beijing. The draft of that declaration is here. The session is also being asked to adopt a draft plan of the commission’s future organization and methods of work. 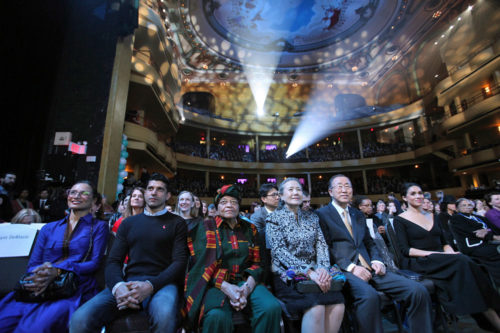 Secretary-General Ban Ki-moon (center right) attends a special event in New York City entitled, “Planet 50-50 by 2030: Step It Up for Gender Equality”. Organized by the United Nations Entity for Gender Equality and the Empowerment of Women (UN Women), the event marks the twentieth anniversary of the Beijing Declaration and Platform for Action, which was adopted by the Fourth World Conference on Women in September 1995. Also pictured: Ban’s wife, Yoo Soon-taek (center) and Republic of Liberia President Ellen Johnson Sirleaf (center left). Photo: United Nations

U.N. Secretary General Ban Ki-moon, in opening remarks on March 9, called 2015 “a vital year for advancing the cause of gender equality.”

“Women continue to suffer disproportionately from the economic crisis, from the impacts of climate change, from the displacement caused by conflict, persecution and so much else,” he said. “Extremist groups continue to viciously and systematically attack girls and women. The international community needs to translate its outrage into aid, services, support and justice.”

However, Ban said, “women are not just victims; they are agents of progress and change.

“Empowered women and girls are the best drivers of growth, the best hope for reconciliation, and the best buffer against radicalization of youth and the repetition of cycles of violence,” he said.

The secretary general has submitted a report to the session on the progress since the Beijing meeting.

There has traditionally been a strong Anglican and Episcopal presence at past UNCSW annual sessions and more than 100 participants from Anglican provinces around the world are in New York for the 2015 gathering. There are 19 accredited Anglican Communion delegates, each officially representing her province. The Rev. Joan Grimm Fraser of the Diocese of Long Island is the provincial delegate representing The Episcopal Church to the Anglican Communion delegation.

Many of the women will visit their permanent country missions at the UN to advocate for the lifting of barriers to women’s active participation in all spheres of public and private life as equal decision-making partners, the core aim of the Beijing Platform for Action.

“Anglican women are present in urban and rural communities all over the world”, said Ann Skamp, convener for the International Anglican Women’s Network who is accompanying the delegation. “They know what is happening at grassroots and bring valuable local knowledge and insights to the table. They also bring the values of their faith and bright hope for the future.”

Ecumenical Women, of which The Episcopal Church and the Anglican Consultative Council (the Communion’s main policy-making body) are members, has filed an official statement to the session saying that many of the goals of the Beijing Platform for Action remain unfulfilled.

“Gender biased institutional structures create inequalities and discrimination, and still exist in public and private sectors, academia, and religious structures,” the statement says, adding that the group is also concerned with “the efforts to roll back gains” made since Beijing.

“We affirm that God’s world was meant to be one of abundance for all people, with fundamental rights and dignity for all women and men. For healthy sustainable societies, women must be integral to the decision-making processes in law, policies and development programs.”

The Episcopal Church has its first official delegation since being granted special consultative status with the Economic and Social Council last July.

A summary of the rest of the Anglican/Episcopal-related UNCSW activities is here.

Diocese of Long Island Assistant Bishop Chilton Knudsen preached March 9 at the opening Eucharist for Anglican and Episcopal participants. Presiding Bishop Katharine Jefferts Schori presided at the Eucharist celebrated in the Chapel of Christ the Lord in the Episcopal Church Center, which is two blocks from the United Nations.

The text of Knudsen’s sermon follows.

Sermon for the Opening Eucharist UNCSW 2015

Mary Magdalene came to the tomb where the body of Jesus was placed after his death on the Cross.

She came to mourn his absence, to remember. She wanted assurance that she could find hope to live the rest of her life without Jesus. Her precious friend Jesus.

Jesus treated her with dignity, healed her, taught her, lifted her up, and shared with her in Table Fellowship. How would she go on without Jesus?

“Woman, why are you weeping?” the angels asked.

Mary Magdalene was weeping because her heart had broken. She wept because the One whom she loved had been brutally executed. Her tears were a sign that she loved deeply; that she had devoted herself to the mission of compassion and justice and peace which Jesus demonstrated. She wept because human beings do terrible things to each other. Human beings continue to do terrible things to one another, because systems of dominance and power and greed and violence — then and now — crush goodness.

Woman, why are you weeping?

Just as she answered “They have taken away my Lord…” she turned and saw someone she did not recognize, maybe it was the gardener.

This mysterious stranger also asked her the same question: “Woman, why are you weeping?”

This is a question to all of humanity, in our time as well as in Jesus’ time.

We come here to this meeting of the United Nations Commission on the Status of Women because there is much in our world which causes us to weep. We weep because children are sold as slaves. Women and children starve for want of food. Because violence and oppression continue to dominate, so women are deprived of freedom and dignity. We are weeping because women are treated as second-class members of their society.

Woman, why are you weeping?

Mary Magdalene answers yet again, assuming that someone has taken away Jesus’ body: “Sir, if you have carried him away, tell me where so I can take his body myself.”

At that moment, Jesus calls her by name, “Mary!” She hears that familiar voice speaking her name. At once, she knows it is Jesus, who is now alive in the glorious power of resurrection.

Hope is alive! The message of Jesus — about compassion and justice — is victorious over the systems of power and greed and oppression.

Jesus then asks two things of her. First, that she not cling to him: not to hold onto the joy of his beating death to live in resurrection glory. Second, Jesus asks that she go and tell others that he is now wonderfully alive, and his mission will continue.

Jesus entrusts to Mary Magdalene the proclamation of his rising from death. Jesus lives! His message lives!

This story tells us that the holy and mysterious agenda of God is given to all believers. As believers, we are to spread this Good News widely into every part of the world.

The Good News of Jesus’ resurrection inspires us to work for justice and peace for all people.

And because we are people who weep, we are also people of action.

So here we are, praying together for the strength to carry on the mission of Jesus. Our weeping has built in us a fire of determination. God’s power is with us, as we move from weeping to action. By this we join with our sister Mary Magdalene to proclaim that Jesus is risen. And because Jesus is risen, our hope is fulfilled and our resurrection work is blessed with the very power that raised Jesus from death.

Let us be about that resurrection work. Beginning now in our worship and our solidarity.

— The Anglican Communion News Service contributed to this story.