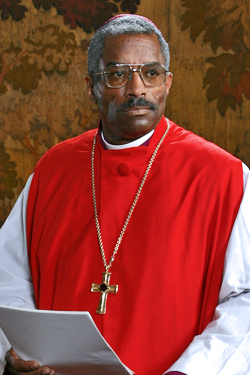 Provenzano, who succeeded Walker in November 2009, noted that Walker was also responsible for “widening the participation and full representation of laity in the ministry of the diocese — especially their serving on diocesan boards and commissions.”

A Requiem Mass for Bishop Walker will be held March 7 at 1:30 p.m. at Christ Church in Detroit, Michigan.

Walker was born Nov. 5, 1942 in Baltimore, Maryland. He received his early education in Baltimore public schools, graduating from Baltimore City College in 1960.

In 1964, he graduated from the University of Maryland with a degree in Political Science and Philosophy. In 1968, he received a Bachelor of Sacred Theology degree from the General Theological Seminary in New York.

In 1980, he earned a Doctor of Ministry degree from Drew University in Madison, New Jersey, and in 1984 a Master of Arts in Religious Studies degree from the University of Windsor in Ontario, Canada. In 1993, he received an MBA in Church Administration from the Graduate Theological Union in Berkeley, California.

Honorary doctorates in canon law and divinity were conferred by Berkeley Divinity School at Yale University and the General Theological Seminary, respectively, in the fall of 1988. An honorary Doctor of Humane Letters degree was conferred by St. Paul’s College, Lawrenceville, Virginia, in 2000.

Walker was ordained to the diaconate in 1968 by the Rt. Rev. Harry Lee Doll. Later that year, Walker was called to serve in St. Mark’s Ecumenical Church in Kansas City, Missouri, as director of program and education.

He was ordained to the priesthood in 1969 by the Rt. Rev. Edward R. Welles on the Vigil of Pentecost. In 1971, he was invited to serve as associate rector of the newly merged churches of St. Matthew’s and St. Joseph’s, Detroit. After the election of its rector, Quintin E. Primo, as bishop suffragan of Chicago, Walker was elected rector, at age 29.

While in the Diocese of Michigan, Walker served as a member of Executive Council, the Trustees, the Urban Affairs Committee, dean of convocation, as a board member, and associate professor of contemporary society at the Whitaker School of Theology. He represented the diocese at the provincial synod for 10 years, serving as chair of the Urban Task Force and a member of the Court of Review. He was elected five times to serve as a deputy to the Episcopal Church’s General Convention.

In other churchwide service, he chaired the Committee on Canons in the House of Bishops, was a member of the Joint Committee on Nominations, and served as vice president of Province II. In addition, he chaired the Task Force for the Recruitment, Training and Deployment of Black Clergy for the Episcopal Church’s Commission on Black Ministries.

In Detroit, Walker was a member of the executive committee of the National Association for the Advancement of Colored People, president of the Cathedral Terrace, a senior citizen housing complex, the Highland Park Community Relations Board and the Black Family Development Board.

He taught Canon Law and Theology & Contemporary Society at The Mercer School and at the General Theological Seminary. And, he also served as president of the Cathedral Chapter of the Cathedral of the Incarnation in Garden City, New York.