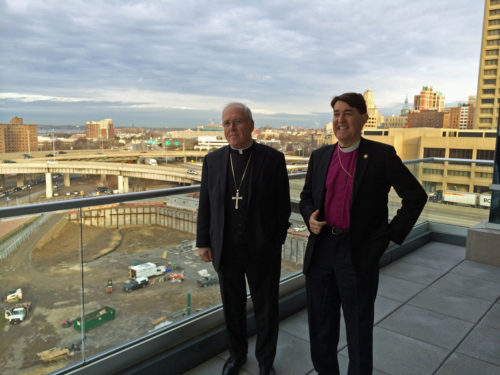 Overlooking evidence of construction and new life in Buffalo, New York, Roman Bishop Richard J. Malone, left, and Episcopal Bishop R. William Franklin met recently to discuss their final thoughts about the historic joint pastoral letter they co-authored. The letter, which calls for the new prosperity taking root in Buffalo to be shared with all, was read in churches on the Third Sunday in Advent. Photo: Diocese West New York

“A new generation of Western New Yorkers is envisioning new opportunities and making them a reality. With regard to education, medicine, technology and quality of life, this is the time for which we have all waited and prayed and worked. This wave of prosperity benefits not only the city, but the entire region,” they wrote. “Yet at this time not everyone is benefiting. Blacks and Hispanics still live in poverty in greater proportion than do other groups in our population. Children still go to bed hungry. Jobs and security elude too many families. And because some are left out and locked out, the rest of us are poorer. We fail to benefit as much as we might from this new golden age.”

In announcing the letter, Malone explained that their goal “is really to raise consciousness among our own parishioners, both in the Catholic and Episcopal dioceses. Perhaps in a humble way to suggest, here is a lens that the two bishops are providing to which we as Christians can look, both at the reasons for hope right now with the development happening in our area, but also to see the challenges and opportunities to make sure what is happening becomes inclusive of the broad spectrum of our people.”

“I think we’re saying this is a great moment of renewal for Buffalo and the region, but it’s also a moment of renewal of Christian values, of dignity and opening dignity to all people,” Franklin added. “We are speaking as bishops to our own people, but we’re also speaking to business and political leaders to say, ‘Let us not lose this opportunity to create a new city, which is beyond a new city of hotels and apartment buildings, but a new city of justice.’ We think it’s a fantastic opportunity for growth, not just economically, but spiritual growth for our region.”

“This is consistent with both our churches’ teachings for centuries,” Malone said. “It speaks to the relationship of the church with the modern world. We see it as a time for breaking down barriers and answering the question, ‘Who is my neighbor?’”

“Too many barriers remain,” said Malone. “It is like there is a wedge in the community.”

In the City of Buffalo the poverty rate in 2013 increased to 31.4% overall according to the U.S. Census Bureau. Even more shocking is the 50.6% poverty rate reported for children under the age of 18.

Overall poverty rates in some of the region’s more rural counties are also high — 19.1% in Chautauqua, 17.2 in Cattaraugus and 17.1% in Allegany.

“We are really talking about a wall that we sometimes forget,” said Franklin. “This moment of economic opportunity allows us an opportunity to address that wall and say that all can rise together. This is part of the message of the Gospel.

“Economic opportunity leads to human dignity. That’s a reality,” he said. “So it’s a spiritual value to open the workforce to a more diverse population. It’s good business, because it’s opening a perspective of people who may be left out of a boardroom or a workplace.”

The bishops acknowledge that many people are already reaching out to less fortunate people. But great needs remain — needs that must be addressed in our spiritual lives, community circles, the business sector and the civic arena. Franklin cited Terry Pegula and his wife Kim as two businesspeople who strive to make their workforce inclusive of women and minorities. The Pegulas own three sport franchises in Buffalo, the Buffalo Sabres, the Buffalo Bandits and the Buffalo Bills. They are also the developers of the new HarborCenter in Buffalo’s Waterfront district.

“Every single Christian, whether they are in a position of leadership or not, I think, is called upon to tend to the concerns we put out there, said Malone. “This is to support those who are already moving in that direction and also to stimulate the attention and commitment of others.”

The bishops envision this letter being a springboard for conversations in parishes.

“A letter like this one, I think, is an invitation to everybody who reads it and those who have written it, to an ongoing examination of our own consciousness around these issues,” Malone said.

“It’s probably never happened between our two dioceses, and probably rarely happened in any other parts of the United States, that an Episcopal bishop and a Roman Catholic bishop have issued a joint pastoral,” said Bishop Franklin. “That has an importance because when bishops issue a pastoral like this, we’re saying you really need to read this or make this available. It’s a solemn moment when two bishops speak like this. I think the fact that we feel comfortable to speak together is a sign of the kind of energy that we want our region to project. We’re trying to symbolize bringing our communities together to speak together, so that in other ways communities may be brought together.”

Sharing the same Gospel values and deep love and concern for their adopted home paved the way for the writing of the letter.

“It’s a chance to strengthen the human community that is the common factor. Generally, [our two dioceses are] the same territory with the same issues, the same challenges, and the same opportunities and hopes,” Malone explained. The Episcopal Diocese of Western New York includes New York State’s seven most western counties: Cattaraugus, Chautauqua, Erie, Genesee, Niagara, Orleans and Wyoming. The Roman Catholic Diocese of Buffalo covers the same seven, plus the largely rural Allegany County.

The genesis of the letter began months ago. That it is issued now, when streets in many American cities are filled with protestors seeking racial equality and justice, is a coincidence.

Today’s protests take Franklin back to his childhood in segregated Mississippi in the 1950s. It was, he says, illegal for him to interact with half the population of his state. In the face of laws that forbade black and white citizens from sitting down together in public places, his grandmother organized meals in her home that brought individuals of both races together.

“As a boy I saw black and white holding hands together at my grandmother’s dining room table, so in a way I am following the inspiration I already saw in the 1950s of holding out our hands to one another.

“We’ve come a long way in our region and in our churches,” Franklin added, “and yet [Bishop Malone and I] are saying the job is not over.”