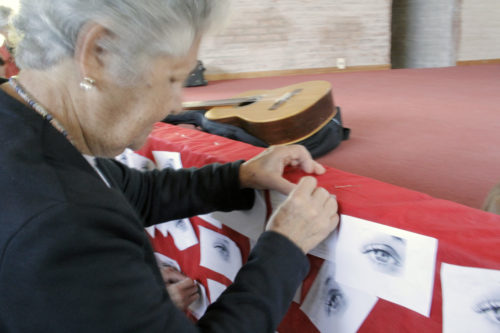 [Episcopal News Service – Montevideo, Uruguay] Some of the women began saving money more than six months in advance and some traveled 12 hours by bus across the border to attend a bi-national conference, which has united for more than eight years Brazilian and Uruguayan women through stories of challenge, courage, strength and love.

Their world is changing, and a few women are moving into leadership roles. Yet much needs to be done to carry out the pioneering Convention of Belém, which required countries who signed it 20 years ago to educate their people about women’s rights, to fight machismo and pass laws to protect women from violence.

Earlier this month, 100 women and more than a dozen men representing the three southern most dioceses – Southwest, Southern, and Pelotas – of the Episcopal Anglican Church of Brazil and the Anglican Diocese of Uruguay gathered at a spiritual retreat center 30 minutes outside the capital here for a two-day conference focused on the theme “church women committed to social change.”

The annual gathering offers the space, said the women, for the storytelling and relationship-building that empowers them in their lives and their community ministries; one of the ways women are committed to social change in their communities is through building awareness about gender-based violence prevention and intervention.

Violence against women and children is prevalent and often commonplace throughout Latin America, where often “women are not even aware of the violence they are in, or they believe that they are the only ones being abused,” said Christina Takatsu Winnischofer, president of the Episcopal Anglican Church of Brazil’s Women’s Union.

Throughout the Nov. 8-9 meeting, women and men shared stories of church and community ministries and social programs that were working well and those that faced challenges, ranging from having the resources to address the community’s needs to the red tape and restrictions that apply when churches work with government agencies to provide social services.

The focus on violence against women and children, the majority of that being domestic violence, was a theme that carried over from the previous year’s conference held in the Diocese of Southern Brazil.

The U.S.-based Episcopal Church, which shares a covenant agreement with the church in Brazil (which became an autonomous province in 1965), also had a presence at the two-day conference, with the Rev. Glenda McQueen, the officer for Latin America and the Caribbean, and the Rev. David Copley, officer for mission personnel, both of whom work in the church’s office of global partnerships; Episcopal Church-appointed missionaries Monica Vega and Heidi Schmidt, who are serving the province of Brazil, and Young Adult Service Corps missionaries Nina Boe of the Diocese of Olympia and Kirsten Lowell of the Diocese of Maine, who serve in the Diocese of Rio de Janeiro and the Diocese of Uruguay, respectively. 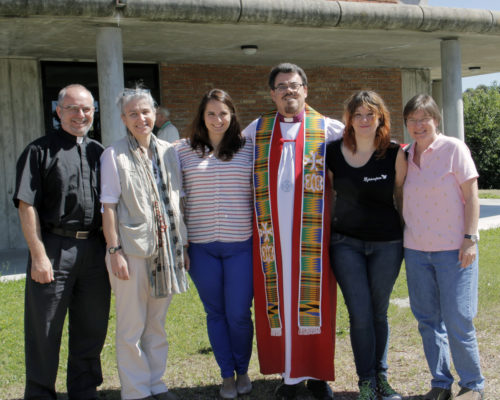 “There is this movement toward addressing women’s issues in our churches today, which is critical,” said Vega, who in addition to serving the church’s provincial office, also works with a nonprofit organization that works to empower women street vendors.

Uruguay, one of the smallest countries in terms of both land area and population in South America, shares borders with two of the largest, Argentina to the west and the much larger Brazil to its north and east. There are 200 million people in Brazil compared with 3.5 million in Uruguay, with 9 percent and 11.5 percent of the population living in poverty, respectively, according to data from the World Bank.

Still, when it comes to violence against women, size, income and other development data don’t tell the story of what the United Nations calls a “pandemic in diverse forms.” An average of 68 domestic violence cases were reported daily in Uruguay in 2013; Amnesty International has criticized the government for its inability to respond adequately to cases of violence against women. Between 2001 and 2011 more than 50,000 women were murdered mainly as a result of domestic violence, according to the Brazilian Institute for Applied Research. Brazil is the seventh most dangerous country in the world as measured by rates of violence toward women. 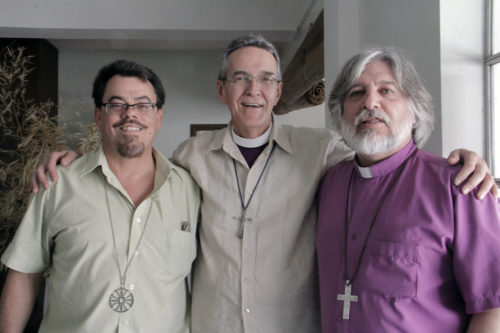 It was something, however, that the church needed to do despite the “taboo,” da Silva said when he addressed the conference on its second day. When the church began talking about violence against women, it couldn’t deny that it exists in the church as well, and that unfortunately men don’t see it as an important topic.

Taking the lead on women’s rights
Coordinated by Anglican Service of Diakonia and Development (SADD), which coordinates social services and projects at all levels of the church, the Episcopal Anglican Church of Brazil embarked on a two–year study of human rights, which through grassroots feedback led to a focus on domestic violence, explained Sandra Andrade, the director of SADD.

In August 2013, SADD, in partnership with Christian Aid, released its first booklet aimed at the prevention and intervention of gender-based violence against women. The booklet, which included 10 workshops aimed at both men and women, was later translated from Portuguese into Spanish and English with the help of Episcopal Relief & Development; it since has been shared in Latin America as well as Africa.

A second version of the booklet updated with an additional workshop on HIV prevention strategies was released earlier this year and distributed at the conference.

“Domestic Violence Against Women is a consequence of a culture constructed by a society that promotes inequalities based on the differences considered to be natural (biological) between the sexes, which determine how each person should behave because they are of one gender or another,” it reads.

“Just as in all social spaces, the religious communities are not exempt from this reality and, often, contribute to the perpetration of this violence through their declarations and practices. Therefore, if as religious communities we are capable of practicing gender-related violence against women, we can also admit that we are capable of overcoming and beating this reality and of building a culture of peace based on the Gospel of Jesus Christ.”

Isolation
Amazonia, which covers more than 2 million square miles of Northern Brazil, can feel particularly isolated since it often is disconnected from government services. A bishop and two priests cover nine distinct communities where domestic violence is prevalent. “Women are literally dying from violence,” said Maria Elizabeth Santos Teixeira, a policewoman from the Diocese of Amazonia who serves as vice president of the Women’s Union.

“It’s one thing to say that there are difficulties, it’s another to be able to sit with others and tell your stories,” said Santos Teixeira.

The isolation Santos Teixeira sometimes feels in Amazonia can be felt in Uruguay as well. The Diocese of Uruguay was thwarted in its attempt in 2012 to become part of the province of Brazil.

The Uruguayan women’s participation in the conference began out of a companion diocese relationship with the Diocese of Southwest Brazil, but the relationship extends beyond that. The church in Uruguay is more connected to the church in Brazil than to its own province.

“It was the work with southern Brazil that really brought the church in Uruguay back to life; they really worked with getting a grassroots church going,” said the Rt. Rev. Michele Pollesel, who became the bishop of Uruguay in 2013 after first being rejected by the bishops of the Anglican Church of South America, formerly called the Anglican Church of the Southern Cone.

One of the things the church in Uruguay has long fought for, said Pollesel, is women’s ordination, which he said he believes will come in the next 12 months as the province is in the process of approving new provincial canons.

In Brazil, a long history of women’s involvement
The Episcopal Anglican Church of Brazil has existed for 125years in what is considered a mostly Roman Catholic country. In contrast, the Diocese of Uruguay celebrated 25 years in 2014 in a largely secular country that is considered the most liberal in Latin America.

Despite Uruguay’s liberal reputation, women aren’t typically seen in decision-making roles in society; the same goes for the church.

Church women in Uruguay tend to take a more traditional role, providing support at the parish level, said Gabriela Nuñez, a lay leader and psychologist who is married to a priest.

On the other hand, the Episcopal Anglican Women’s Union has existed in Brazil under different names for more than 100 years, and adopted its existing name in the 1980s “to reflect the need for women to be united,” said Winnischofer, the union’s president and general secretary of the Episcopal Anglican Church of Brazil from 2003 to 2006.

The name change also symbolized a shift in focus from what had been a traditional auxiliary role in support of the church, the elderly and the poor, to one that included women’s needs; and it happened at a time when church women came together in support of women’s ordination, which also raised the issue of the status of women in the church, said Winnischofer. 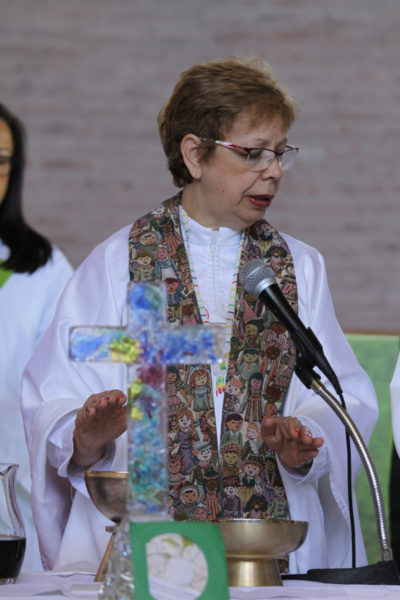 The Rev. Carmen Gomes, the first woman ordained in the Episcopal Anglican Church of Brazil, presided at the Nov. 9 Eucharist. Photo: David Copley

In 1985, the Rev. Carmen Gomes became the first woman ordained in the Episcopal Anglican Church of Brazil, which today has 30 women priests serving throughout its nine dioceses. Additionally, women have served in leadership roles at all levels of the church.

Through meetings, sharing stories and offering support for one another, the Women’s Union still works to raise the status of women in the church and society, a task that’s ever more difficult when women have full-time work and family demands, said Winnischofer.

“Women are more visible in society,” she said, but they are still underrepresented in leadership roles despite the advances. She said the persistent attitude has been that “on the one hand we are visible and have a presence, that we don’t need to come to the table because we are already in the room.”