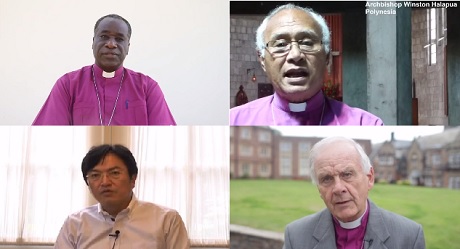 [Anglican Communion News Service] “As men of faith, we can take responsibility to speak out and end violence against women and girls.” This is the core message of a short video just released in the run-up to the 16 Days of Activism against Gender-based Violence.

“Typically, activists during the 16 Days have been women”, said the Rev. Terrie Robinson, director for women in church & society at the Anglican Communion Office. “So it’s always very encouraging when men stand in solidarity with women, speak out and make a commitment to act to end and prevent gender based violence – and encourage other men to do the same.”

“The video is an inspiring addition to the growing collection of resources we now have to help us plan for participation in the 16 Days in our dioceses and parishes. I am so grateful to the Anglican men who were filmed separately in their home locations for the final video. They didn’t hesitate for a second when asked to take part in the project. Their positive message will affirm work that’s already going on around the Communion to end the misery caused by gender-based violence and it will inspire new work too.

“We know that men and boys can be victims and survivors of gender based violence too. For the 16 Days, the focus is on ending violence against women and girls but any activism that promotes equal and respectful relationship will be good news, all year round, whoever and wherever we are.”

The 16 Days of Activism against Gender Violence begin on 25 November, the International Day for the Elimination of Violence Against Women and end on 10 December, Human Rights Day.