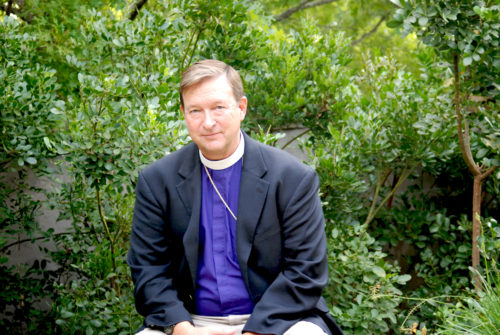 Reed, 57, is currently the bishop suffragan of the diocese, and was one of six nominees. As bishop coadjutor, Reed will continue to serve alongside Bishop Gary Lillibridge. Upon Lillibridge’s retirement in 2017, Reed will become the 10th bishop of the Diocese of West Texas.

In order to be elected, a candidate needed to receive a majority of votes from both the clergy and the lay delegates, voting separately as “orders” on the same balloting round. Reed secured election on the first ballot, receiving 66 clergy votes and 207 lay votes, with 63 and 157 needed, respectively, for election.

Pending consents from a majority of bishops with jurisdiction and Standing Committees of Episcopal Church dioceses, Reed will be recognized as bishop coadjutor during the worship service at Diocesan Council in February 2015. The service will be held on Feb. 28, in San Marcos, and the Presiding Bishop Katharine Jefferts Schori will preside.

Reed is the first Bishop Suffragan of the diocese to be elected Bishop Coadjutor and then to go on to serve as Diocesan Bishop. Reed was ordained in 1983 when he graduated from the Seminary of the Southwest in Austin, Texas. Reed served as Assistant Rector of St. Alban’s, Harlingen, from 1983-1987; as Rector of St. Francis, Victoria, from 1987-1994; and as Rector of St. Alban’s, Harlingen, from 1994-2006. Bishop Reed was elected Bishop Suffragan of the diocese in 2006.

The other nominees were the Rev. Scott Brown, the Rev. Ram Lopez, the Rev. Jim Nelson, the Rev. David Read, and the Rev. Robert Woody.