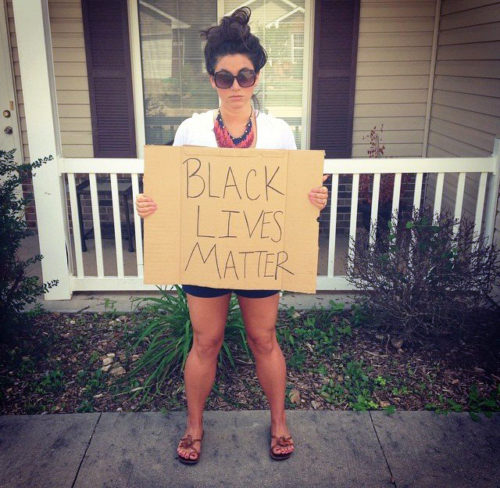 Danielle Dowd, youth missioner for the Episcopal Diocese of Missouri, has been spending several days a week on the streets of Ferguson and St. Louis.

[Episcopal News Service] Danielle Dowd was back in front of the Ferguson police department Oct. 15, just two days after being arrested there while protesting the fatal police shooting of unarmed teenager Michael Brown and other African-American youths.

Since Brown’s Aug. 9 death, “I’ve come a couple of days every week, except for when my 7-year-old daughter had her tonsils out and I needed to do the mom thing. I’ve been able to form some good relationships with young people, whose voices need to be heard,” Dowd, 26, youth missioner for the Episcopal Diocese of Missouri, told the Episcopal News Service (ENS).

Similarly, the Rev. Jon Stratton, director of Episcopal Service Corps in the diocese, spent Oct. 13 – his 30th birthday – marching, singing, chanting “Whose streets? Our streets. Whose streets? God’s streets,” and ultimately, being arrested.

They and other Episcopalians were among dozens jailed during a “Moral Monday” action at the Ferguson police department. It was part of a weekend series of acts of civil disobedience across the St. Louis region coordinated by “Hands Up, Don’t Shoot” and the Organization for Black Struggle.

The emerging movement, its youthful leadership and developing relationships have been compared to 1960s civil rights activism by some and called a human rights movement by others. It has also brought into the open long-festering tensions between the African-American community and the police department, and spawned calls for sweeping educational, economic and institutional change.

The moment presents interesting opportunities for the church, says the Very Rev. Mike Kinman, dean of Christ Church Cathedral in St. Louis. “This is the ‘come to Jesus’ moment for us in the church.”

Chuck Wynder, missioner for social justice and advocacy for the Domestic and Foreign Missionary Society, agreed. “We recognize that the church increasingly has a role to play in being a prophetic voice in a safe place for the work of racial justice and reconciliation. We continue to be a resource for the Diocese of Missouri and to bridge the events and the developments in Ferguson with the issues, the dynamics and the conversation around the country.”

Among other things, “we are in the process of building a resource page, through [the wider church’s] Episcopal Public Policy Network, of voices, resources and practices about the death of Michael Brown, the situation in Ferguson and how that relates to the work of social justice and racial reconciliation through the church around the country,” Wynder said.

The church continues to position itself to be an instrumental resource as Ferguson – and the rest of the nation – anxiously awaits the grand jury decision and if charges will stem from the Michael Brown shooting, said Wynder, who added: “We are ramping up for what we know is coming.”

The Episcopal Church has been focusing resources on the Ferguson area since shortly after Brown’s death. In September it awarded $30,000 and Episcopal Relief & Development contributed another $10,000 for a grant to three area churches for domestic poverty, pastoral and community work in Ferguson.

St. Stephen’s (Ferguson), Ascension (Northwoods), and All Saints’ (St. Louis City) have been significantly impacted by the upheaval in the aftermath of the fatal shooting of Brown and the community’s response to it. The churches have been at the forefront of mobilizing resources for the community, ministering to the needs of protestors and police alike and simply “being the church” for all.

The march: Repentance, confession, absolution, arrest
Stratton was among an estimated several thousand people who joined the Oct. 13 largely youth-led march, braving so much rain that, at one point, “We were singing ‘Wade in the Water,’” he told ENS on Oct. 15.

“The theme was of repentance and confession and absolution and turning from systems that perpetuate racism and injustice,” including church systems, he said. Clergy confessed their complicity in such systems and called upon police officers, standing in a line outside the Ferguson police station, to do likewise.

“We want to be very clear that the clergy, speaking for myself and those by me, were not talking about individual sin, this is systematic sin,” he added. “We were telling the police officers they were very valued and beloved children of God, but they’re part of a system that not only stereotypes and dehumanizes folks on the other side, but also that leads to the dehumanization of the police force.

“Every time they come out in riot gear, it is a tangible sign of dehumanization. They cease to be seen as people and more as machines or as weapons of violence.”

The occasion marked the second time in her life that the Rev. Anne Kelsey, 67, retired rector of Trinity Church in St. Louis’s Central West End, was arrested. She recalled demonstrating at the Pentagon with the Episcopal Peace Fellowship and Witness for Peace 42 years ago “and this was not like that,” she told ENS. Then, “we were in the concourse of the Pentagon having a Mass for peace.” 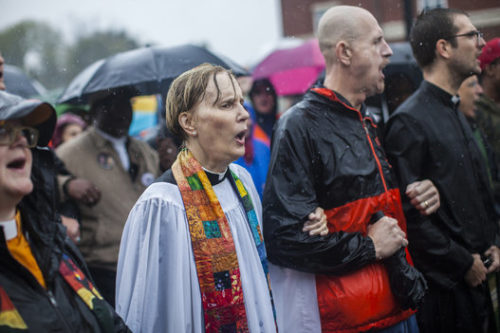 From left, the Rev. Anne Kelsey, the Rev. Jeff Moore, and the Rev. Jonathon Stratton, director of the Deaconess Anne House in St. Louis, were arrested together on Oct. 13.

For Kelsey, the weekend, especially a Saturday evening rally, felt historic, like “we were seeing the rebirth of the civil rights movement.”

So she attended the “Moral Monday” action in a cassock and surplice and stole “and we got there and it rained and rained, and halfway through, there was a tornado warning.”

Kelsey joined the protests after the Oct. 8 fatal police shooting of another young African-American man, Vonderrit Myers, near her Shaw neighborhood home.

“I heard the shots and my husband and I walked the three blocks to see what was going on. It was just terrible, the rage and grief and crowds,” she recalled. The circumstances surrounding the fatal shooting of Myers – who allegedly had a weapon and fired at police – differ from accounts of the death of Michael Brown, who was unarmed. But, “it was really traumatizing after the Michael Brown thing.”

After police removed the body and crime scene tape, “we stood right on the spot where he died and prayed,” Kelsey said slowly, haltingly, painfully. “I just got involved in ways that I hadn’t planned on. This was my neighborhood,” she said. “There is a divide in this neighborhood. I stood there while this woman yelled at me for a long time. She said she had worked for Amnesty International and was berating the white clergy for not doing enough. It’s not a comfortable situation.”

While demonstrating Oct. 13, Kelsey and others stood in front of the police line at the Ferguson Police Department and asked officers “to repent of the institutional sins of the police department. I told the man I was facing that, whether or not I like it, when I wear my collar, I’m the face of the church for people and I have to be the first one to ask forgiveness for the sins of the church whether I’ve committed them or not in the same way. Police officers wear the face of the justice system. I don’t think it’s unreasonable to ask them to reflect on that.”

When she knelt in front of him she “fell through the line” and was arrested and immediately handcuffed and placed in a police vehicle. She was jailed for several hours and then released.

An emerging movement: ‘The young people are mentoring us’
Dowd and Stratton have both spent several days a week on the streets of Ferguson and St. Louis “getting to know the young folks who’ve been out there every day for 67 days. Part of what I want to do is to support them and follow them,” Stratton said.

“They’re the ones most affected by the police brutality, who were friends of Michael Brown and live in Ferguson. They are the folks the church needs to be listening to and in many ways, taking our cue from.”

Like Joshua Williams, 18, and Jermell Hasson, 27, who on Oct. 15 were outside the Ferguson police department along with Dowd.

“That made me come out here, for everybody in the world and their kids.”

Hasson agreed that the issue means fuller, deeper justice for Michael Brown, “but that is just one aspect of what’s at stake. “

“This has a lot to do with human rights,” he added. “This isn’t a civil rights movement, it’s a human rights movement. I should be able to get the same treatment as anyone else who steps into a police station across the United States and I will be here till forever.”

But for now, “I’m focusing on Michael Brown. I want a killer to go jail,” added Hasson, who was arrested at the protest and said he had just been released from jail Oct. 15 following a previous protest arrest. “If I had to find a word for Ferguson,” he said, “it’s ‘fragile.’ It can go either way. It’s just very, very hard.”

Unaffiliated with a church, Hasson said maintaining a presence outside the police department has given him hope because of “the diversity I see out here. It shows me that it’s not just African-American women and men that stand for me. I see a lot of white women and brothers, and Asians. I like the diversity, that everyone can relate to what we go through in this society. I’ve learned about other cultures out here in side conversations. This is a learning experience.”

‘This is what theology looks like’
Kinman says that “one of the most insidious pieces of living in a segregated society is that we don’t have relationships where we know each other ” and so are tempted not to see each other in images of God and are tempted into fear and, particularly when we’re tired and in trauma, we’re tempted to act out of those places,” which affords the church really interesting roles that may seem contradictory.

Another is to build relationships with police officers, also victims of an institutional system, Dowd said Oct.15. “I am not out here to demonize police officers or law enforcement. I want us all to work together to find something better,” she said.

Dowd said she is learning more about privilege and “the misconceptions I’ve had or ways I’ve benefitted from being white in this country. I’m learning to do a lot of listening and realizing I don’t have to always be the one in charge. It’s important to listen and learn from and follow the lead of young black people on the ground here, day in and day out, living it all the time.

“For me, this is a choice; for them, it’s not,” she added. “I can step into this and step away any time I want. But this is their everyday life. This is something that these young people feel is a matter of life and death for them. I am proud and honored and humbled to be able to stand in solidarity to show them I mean it when I say I’m with them all the way.”

But he added: “this isn’t your grandmother’s civil rights movement. These young people met on Twitter and are using technology for social change. And, they’re not Episcopalian. One of the major teachable moments for us is, these are people who have not been in our churches. Some go to church but in general the voices coming out are voices that feel like the church has left them behind. They want to know where we’ve been.”