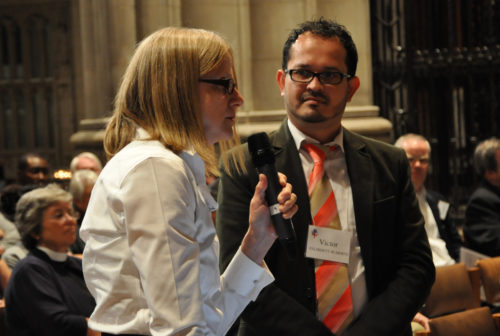 [Episcopal News Service – Washington, D.C.] After spending the evening of Oct. 2 answering questions and taking comments about its work, the Task Force for Reimagining the Episcopal Church is refining its recommendations to General Convention on structural changes to the church.

TREC’s last face-to-face meeting before its report to General Convention is due began with the 2.5-hour gathering Oct. 2. The event was webcast live from Washington National Cathedral. The agenda included 10-minute presentations from some TREC members each followed by 15-minute question-and-comment periods. A 40-minute question-and-comment period rounded out the meeting. Questions, concerns and comments were taken from the audience in the cathedral as well as from people sending in questions via e-mail and Twitter.

The task force recently released a letter to the church outlining what it called “our thinking and emerging recommendations” on structural changes it will make to the 2015 meeting of General Convention. It said in that letter that its final report, due to be made public at the end of November, would “illustrate how these recommended changes would help The Episcopal Church to more effectively and efficiently address critical and urgent agenda items, with the flexibility to innovate and experiment more rapidly and to adopt bold courses of action where necessary.”

It was not clear from comments made during the Oct. 2 gathering if the proposals included in that Sept. 4 letter will remain as they are, whether others will be added or just how sweeping a scope the final report’s recommendation will have. 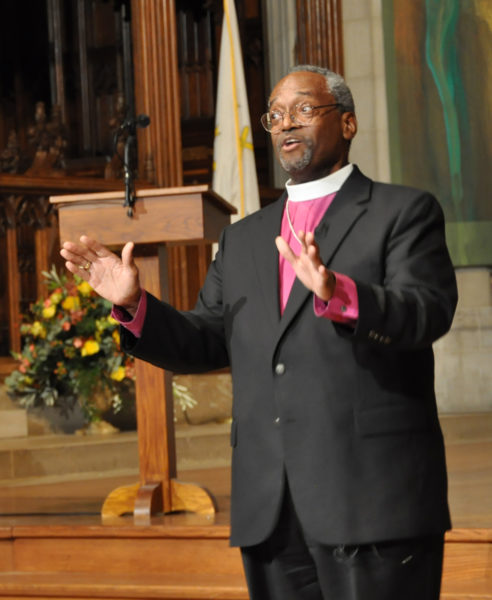 Diocese of North Carolina Bishop Michael Curry leads off the Oct. 2 church-wide gathering of the Task Force for Reimagining the Episcopal Church at Washington National Cathedral with a commentary on the biblical perspective on TREC’s work. Photo: Mary Frances Schjonberg/Episcopal News Service

“I think for most of us, we understand that what TREC is doing is a beginning; it’s not the final product; that we are in the midst of a great transformation culturally and as a church in terms of doing the mission of Jesus in this particular mission moment,” North Carolina Bishop Michael Curry, a TREC member. “At a basic level our hope is that whatever we recommend will be in a preliminary way and the convention will wrestle with it … and we will do something that will move this movement forward.”

On the other hand, the Rev. Dwight Zscheile, TREC member from Minnesota, answered a question about why the task force had not called for dramatic changes such as combining the House of Deputies and the House of Bishops or eliminating all church-wide staff by saying: “The challenge for any group, given this very large task and very short amount of time is we’ve had a lot of big, dreaming conversations and quite radical ideas and we’re still hoping to be bold.”

“And we’ve also heard from a lot of you: “don’t blow things up … there’s things that are working.’ So that’s part of the discernment for us and part of the challenge … We see this as an opening up of the structures, you know, there may be ongoing reform, not just once every generation,” he added.

Katy George, who convenes TREC along with the Rev. Craig Loya, told the Oct. 2 gathering that the group sees its effort as an important way to help the church work for “renewal, revival, discipleship” but she added what she called a disclaimer.

“Structural reform is neither necessary nor sufficient for our church to fully live into the opportunities for discipleship that we have or to fully address the issues that we have … but, boy, it would be helpful,” she said.

George and others said that TREC was considering how to streamline church-wide structures in a way that aided mission work at the local level and that gave those larger structures greater clarity in terms of their responsibilities and accountability. 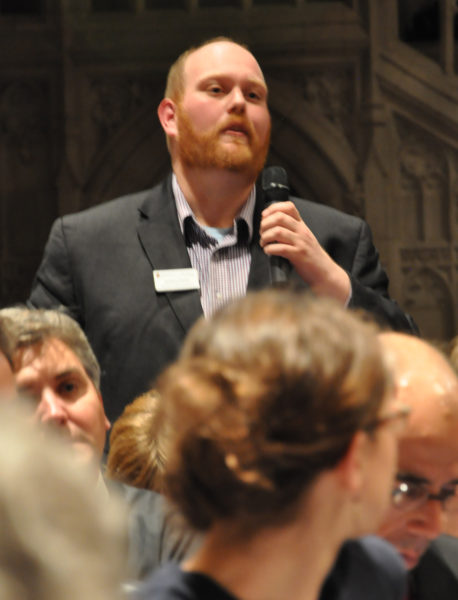 Jonathan Elliot, Diocese of New Jersey’s director of communication, asks members of the Task Force for Reimagining the Episcopal Church, what they will recommend about evangelizing young people like himself. Elliot got a round of applause when he announced that he was being baptized Oct. 5. Photo: Mary Frances Schjonberg/Episcopal News Service

“I was actually surprised by reactions to our letter concerned about centralization of power because I think what we’re doing is actually clarifying responsibility and creating the platform for us holding our leadership and our church-wide staff accountable for specific things,” especially between meetings of General Convention when the staff and the Executive Council are responsible for carrying out convention’s mandates, she said.

TREC member Dennis Sullivan added that TREC is not making any recommendations about centralization of power but rather about “how the checks and balances would be understood and followed.”

George also cautioned that the debate about structure “doesn’t get in the way of keeping our church healthy and vital for our children and grandchildren.”

She also noted that church-wide structures “while they seem cumbersome and big are only about two percent of our total resources of the church” and thus cutting costs is not a priority of TREC but that “better use of our resources against the things that really matter is a priority.”

TREC’s work began after General Convention in July 2012, by way of Resolution C095, which called for a task force “to present the 78th General Convention with a plan for reforming the church’s structures, governance, and administration.”

Of the almost 400 resolutions submitted to General Convention in 2012 more than 90 related to structural reform. Most of those resolutions were similar in nature and it was the work of the structure committee at convention to consider the legislation and make its recommendations to the house.

The driving force behind those resolutions was a proposal in September 2011 by Bishop Stacy Sauls, the Episcopal Church’s chief operating officer, calling on dioceses to submit versions of a model General Convention resolution he offered asking for a special General Convention in 2014 to begin to make structural changes to the church. 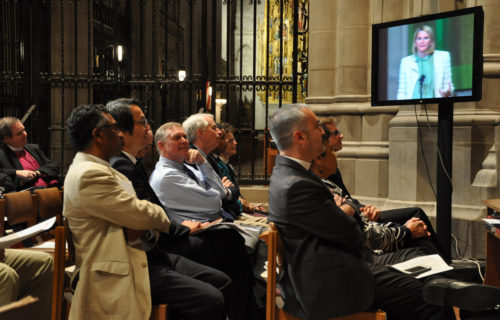 Applause and cheers erupted July 11, 2012, at General Convention as Resolution C095 sailed unanimously through the House of Bishops. A day earlier, deputies also had passed the resolution unanimously.
Resolution C095 called for a “special gathering to receive responses to the proposed recommendations to be brought forward to the 78th General Convention, and shall invite to this gathering from each diocese at least a bishop, a lay deputy, a clerical deputy, and one person under the age of 35.”

The Oct. 2 gathering was the only time that the task force met face-to-face with members of the church. TREC’s five meetings to date have been held almost entirely in private and the Oct. 3-4 portion of its final meeting will be closed as well.

TREC has also asked for feedback from the church via its website by encouraging church groups and individuals to use its engagement kit. The group also released study papers on identity and vision, Episcopal networks, and church-wide governance and administration. Each of those papers elicited responses on various social media and on various church observers’ blogs, as did TREC’s September Letter to the Church.

TREC’s Facebook page is here and it is here on Twitter with @ReimagineTEC, where the group is using #reimaginetec. Tweets from during the meeting using that hashtag are here. During the meeting, many people tweeted using #TREClive. Those tweets are here.