[Episcopal News Service] The board of trustees’ executive committee for General Theological Seminary in New York has “voted with great regret to accept the resignations” of eight full-time professors who say “the working environment that the Dean and President has created has become unsustainable.”

The board said its decision came “after much prayer and deliberation and after consulting our legal council.” The trustees also said that the primary concern of the seminary “continues to be the education and formation of our students.”

A conflict between the dean and some members of faculty at the nearly 200-year-old seminary was made public late last week when e-mails from the departing professors to students were circulated.

Nowhere in those e-mails did the eight say they were resigning and at least one of the professors, Andrew Irving, said in a subsequent e-mail that “we wish to underline that we have not resigned. Our letters did not say that we would resign. We requested meetings with the board.”

The 37-member board, many of whom met via conference call on Sept. 29 to discuss the conflict, said in a statement released the next day that they had reached their decision “with heavy hearts,” but agreed that “following months of internal divisions around the future direction of General Seminary” it was the “best path forward in educating our students and shaping them into leaders of the church.”

The board said that the seminary is willing to meet with any former faculty member about the possibility of reconsidering his or her position. 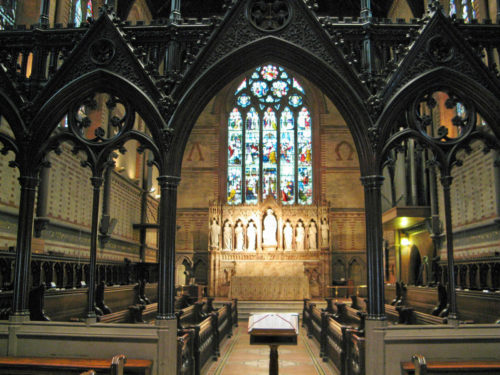 The eight faculty members said they would not teach, attend meetings, or participate in common worship in the Chapel of the Good Shepherd until “pressing issues” at the seminary were addressed.

After the trustees made their decision, the Very Rev. Kurt Dunkle, who became dean and president in July 2013, said in a Sept. 29 e-mail to students: “Prayer is the most powerful response any of us can make at this point. Please pray.”

Dunkle and the remaining faculty, the board said, “are working on the best ways to continue teaching and advising and to assure all that we will continue to provide quality education and formation with the least amount of interruption possible.”

The board’s statement notes that the school’s New York location “affords us access to a wide range of resources, and we shall be drawing upon those resources to address any needs created by these resignations.”

Professors Joshua Davis, Mitties DeChamplain, Deirdre Good, David Hurd, Andrew Irving, Andrew Kadel, Amy Lamborn and Patrick Malloy said in their Sept. 26 e-mail to students that they were not going to teach, attend meetings, or participate in common worship until “pressing issues” at the seminary were addressed. They said that “despite many attempts at dialogue in the past year – including conversations facilitated by a professional external facilitator – the situation has deteriorated to such an extent that we have reached an impasse.”

The professors said that they had communicated what they called “dire circumstances” to the board of trustees and said that their “work stoppage” could be ended immediately if the board would commit to meeting with them.

But the board said in its statement that some of those demands for action were “not possible under the governing structure of the Seminary.”

Dunkle, a former lawyer and a 2004 graduate of GTS, e-mailed the seminary community on the morning of Sept. 29 saying that the principal concern is the welfare of the students and acknowledging that worship is central to GTS.

In a further email on Sept. 30, as the board’s statement was pending, Dunkle confirmed that about half of the classes would continue uninterrupted. “As we go through this together, remember that all our hope on God is founded,” he added. “It’s not just a hymn, but a guiding reminder of our fundamental truth. Prayer, either alone or together, is the most effective way to access God. Please remember to continue to pray for all those here and not here.”

The departing professors expressed their view that Dunkle “has repeatedly shown that he is unable to articulate sensitively and theologically the issues that are essential to the thriving of the Body of Christ in its great diversity. Moreover his failure to collaborate, or to respond to our concerns when articulated has resulted in a climate that many of us find to be fraught with conflict, fear, and anxiety.”

They mentioned that there had been “a number of very serious incidents and patterns of behavior which have over time caused faculty, students, and staff to feel intimidated, profoundly disrespected, excluded, devalued, and helpless … Our concerns about these behaviors and their consequences have been dismissed by the Dean. We find that the Dean’s unwillingness to take responsibility for the damage that these ways of acting and speaking have caused is deeply problematic.”

The board of trustees said in its Sept. 30 statement that it is conducting an internal investigation into the allegations of statements made by Dunkle.

The General Theological Seminary was founded in 1817 in the Chelsea neighborhood of New York City as the first theological seminary of the Episcopal Church.

As with many theological institutions, GTS has faced economic pressures following the global financial crisis leading to the sale of some of its property in order to eliminate debt and balance its budget. There was no indication from the various statements and correspondence that the seminary’s financial issues had in any way contributed to the present conflict.

The 10 Episcopal seminaries in the U.S. have very few official ties to the Episcopal Church, beyond General Convention’s authority to elect six of the GTS trustees.

Presiding Bishop Katharine Jefferts Schori will visit the school on the morning of Oct. 1. She will visit an 8:30 a.m. class, attend chapel and then “be present on the Close until 11:30 a.m. for your own contact with her,” Dunkle said in his first Sept. 30 e-mail to students.

“The Church is counting on us,” the board concluded in its statement. “This week Dean Dunkle and the remaining faculty are working on the best ways to continue teaching and advising and to assure all that we will continue to provide quality education and formation with the least amount of interruption possible.

“While we may sometimes disagree, the commitment to our current students is a responsibility that the Board takes seriously. It is for their well-being alone that we came to this resolution, and pray that our decision was the right one.”