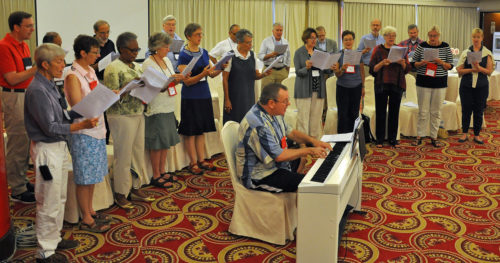 The House of Bishops and Spouses Choir rehearses prior to Eucharist Sept. 23 on the closing day of the house’s meeting in Taipei. Photo: Mary Frances Schjonberg/Episcopal News Service

[Episcopal News Service – Taipei, Taiwan] Members of the House of Bishops are leaving their meeting here with an expanded view of ministry of the Episcopal and Anglican churches in Asia.

“This meeting has offered abundant opportunities to expand our vision of what is possible as we engage God’s mission,” Presiding Bishop Katharine Jefferts Schori said in a written statement released at the conclusion of the Sept. 17-23 meeting, the first gathering of the house in Asia.

“We have built new relationships with our partners in Hong Kong, Japan, Korea, the Philippines and with our brother and sisters in Taiwan,” she said. “We’ve discovered new readings of the old, old stories and new theological perspectives rooted in different parts of God’s creation. With hearts and minds expanded, we know ourselves part of a body larger and with deeper bonds than we imagined.”

Jefferts Schori called the hospitality of the host Diocese of Taiwan “full measure, pressed down, and overflowing.”

“May God continue to richly bless this part of The Episcopal Church,” she said.

Shortly after the close of the Taipei meeting, Jefferts Schori released a statement saying she had decided not to stand for election to a second term as presiding bishop.

Diocese of Kansas Bishop Dean Wolfe, vice president of the House of Bishops, said in his statement that “all of us who have congregants from Asia have gained a deeper understanding of the context from which our brothers and sisters have come and a greater appreciation for the Christian witness along the Pacific Rim.”

Wolfe also addressed the issue of the reason for traveling to Taiwan. “We traveled a very long way and at no small expense to come to Taiwan to reinforce a principal which is dear to us; that every diocese is an essential member of our family of faith and no diocese is too small or too far away,” he said.

Diocese of Los Angeles Bishop Suffragan Diane Jardine Bruce, assistant secretary of the house, echoed that sentiment saying that “with the growing Asian community in the United States, especially on the West Coast including my home diocese of Los Angeles, having firsthand knowledge and witness of the context and content of ministry and mission, we are able to more directly address our mutual needs.”

And Bishop Todd Ousley of Eastern Michigan, co-chair of the house’s planning committee, evoked Archbishop Nathaniel Makoto Uematsu’s description the day before of how the Nippon Sei Ko Kai (the Anglican Church in Japan) has pledged itself to work for peace and reconciliation, grounded in repentance.

“I leave this meeting reminded that to be an apostle, one who is sent, and to invite others to be people sent to proclaim God’s message of peace and reconciliation, we must not rush headlong into action with programs and events,” Ousley said. “Rather, we must begin with self-examination and spiritual acts of repentance that ground our message and lend it integrity. Only then will our message of peace and reconciliation be received as the Good News that it indeed is.”

The complete texts of the bishops’ four statements are here. 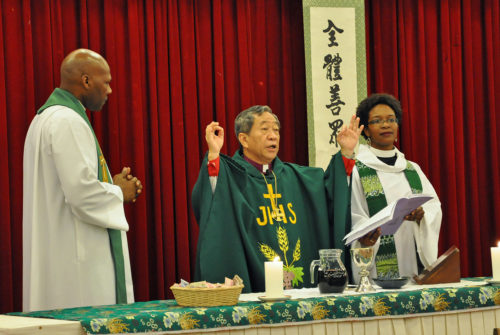 Also on the concluding day
During a business meeting on Sept. 23, the final day of the seven-day gathering, the bishops asked Jefferts Schori to consult with Archbishop of Canterbury Justin Welby “and seek ways that the communion could be agents of peace” in the rapidly changing situation involving Islamic militancy and its threats to Christians and others. Jefferts Schori said that she would be talking to Welby in a few weeks and would pass along the house’s concern.

Later in the business-meeting portion of the session, Diocese of Pennsylvania Bishop Provisional Clifton Daniel moved that the House of Bishops “express its thanks to our presiding bishop, for her witness, her life and her ministry as our presiding bishop and wish her Godspeed as her tenure in this position continues.”

“Is there a discussion?” Jefferts Schori asked, to laughter. “This is awkward.”

Vice President Wolfe stepped in to say: “All those in favor, signify by saying …” only to be interrupted by applause as the bishops rose to their feet.

Before the business meeting, the house met town hall-style during which individual bishops updated their colleagues on ongoing issues in their lives and dioceses. Among the comments made were:

On Sept. 24, a number of bishops head to Japan, Hong Kong, the Philippines or Korea to continue learning about the mission and ministry of the Anglican Church in those contexts.