[Episcopal News Service – Taipei, Taiwan] God is calling the church in Asia to be an agent of reconciliation and a prophetic witness, three Asian Anglican archbishops told the House of Bishops, and they said the church across the world also must respond to the same call. 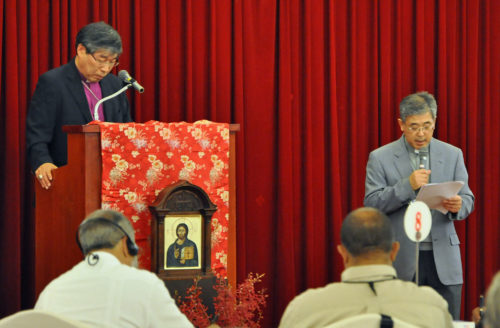 Seoul Archbishop Paul Kim, who is also the primate of the Anglican Church in Korea, tells the Episcopal Church House of Bishops Sept. 22 that “reconciliation should be the core message of the church not just on the Korean peninsula but in the world.” The Rev. Aidan Koh, of St. James in the City in Los Angeles, translated for Kim. Photo: Mary Frances Schjonberg/Episcopal News Service

“Reconciliation should be the core message of the church not just on the Korean peninsula but in the world,” said Seoul Archbishop Paul Kim, primate of the Anglican Church of Korea.

Kim, Archbishop Nathaniel Makoto Uematsu, primate of the Nippon Sei Ko Kai (the Anglican Church in Japan) and Episcopal Church in the Philippines Prime Bishop Edward Malecdan all spoke to the house Sept. 22, describing the theological context and mission challenges of their provinces. Each spoke of how paying attention to the poor in their countries has strengthened the faith and witness of their churches.

The threat of war across the world has led to increased nationalism and militarization, in northeast Asia and elsewhere, which has at times lead to threats against those who “proclaim Christ’s gospel message of reconciliation and peace [and they are] treated as traitors in the nations to which they belong,” Kim said through translator the Rev. Aidan Koh of St. James in the City in Los Angeles.

Even within churches there can be differences of opinions about how to work for reconciliation, Kim said. Rather than being able to use those disagreements to find “new creative possibilities,” discord can develop and such discord can easily make Christ’s gospel of reconciliation “a laughing stock.”

Kim said it is time to unite the worldwide church “as a prophetic witness to reconciliation” against the violence of domination.

“We as Anglicans are chosen by God to be the servants and witnesses of forgiveness and reconciliation,” he said. 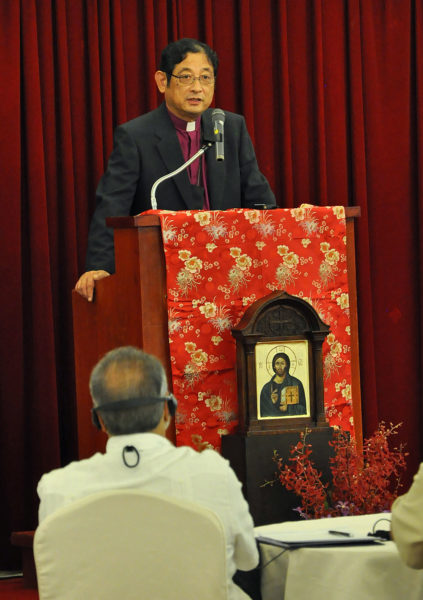 Archbishop Nathaniel Makoto Uematsu, the primate of the Nippon Sei Ko Kai (the Anglican Church in Japan), says the Japanese church is trying to be an agent of reconciliation in that country. Photo: Mary Frances Schjonberg/Episcopal News Service

Both Kim and Uematsu of the Nippon Sei Ko Kai spoke of the reconciliation that has happened between their two churches. Uematsu said that Japan’s annexation of Korea in 1910 was the start of a militaristic period in his country’s history that only ended with its defeat in World War II. The church did not protest as Japan began to occupy and colonize other Asian countries, he said.

It wasn’t until the late 1990s that the church began to look critically at its past and its role in the nation’s history. “We especially felt called to repent and seek reconciliation and a deeper engagement with our neighbors” who had suffered under Japanese occupation and colonization, Uematsu said.

In 1996, the church’s General Synod pass a Statement of War Responsibility in which the NSKK “confessed to God as a church” and apologized to God and to its neighbors. Since then, Uematsu said, the statement has been the basis of NSKK’s sense that it is called to serve the marginalized in Japanese society.

The NSKK has sought reconciliation and “restoration under our bond in the same Lord” with Taiwan, the Philippines, Papua New Guinea and other countries that suffered from wartime Japanese occupation.

“We are especially blessed by our fellow Anglicans in the Anglican Church in Korea who opened their hearts to our people even before Japan had come to terms with and apologized for its role in the colonization of the Korean peninsula,” Uematsu said. Nearly 30 years ago the Koreans “opened the door” to exchanges between the two provinces at all levels, he noted. 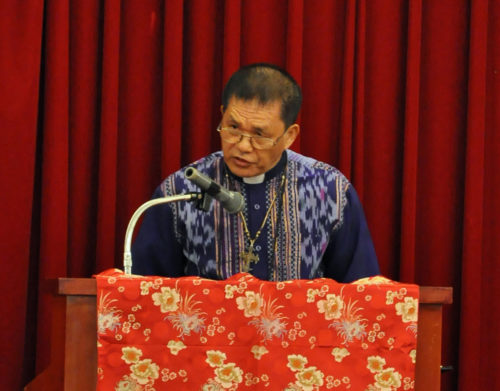 The Most Rev. Edward P. Malecdan, prime bishop of the Episcopal Church in the Philippines, describes for the House of Bishops how his church worked to become self-supporting and how it tries to be a prophetic witness in the country. Photo: Mary Frances Schjonberg/Episcopal News Service

Meanwhile, Philippines Prime Bishop Malecdan told how Islamic unrest in Mindanao and a continuing communist insurgency means there is a “never-ending absence of peace in some parts of the country.” And the church is aware of the lack of peace elsewhere in the word. For instance, it will soon host a forum at its St. Andrew’s Seminary chapel on the Israel-Palestine conflict.

“In other words, the doors of ECP churches and other institutions are open for peacemaking gatherings,” he said.

The biblical mandate to give voice to the voiceless at both the local and global level, Malecdan said, “is about contributing positively to the establishment of just peace and the commitment to social action for the transformation of unjust society and structures.”

“We are only a minority church often neglected and overlooked by bigger sister provinces in the Anglican Communion, but for the ECP we are aware that what we are doing is like a little drop of water in the vast Pacific ocean and the turbulent China Sea,” he said, adding that that “little drop” is better than being “part of the problems by our silence and inaction.”

Three examples that Malecdan gave seemed to be much more than little drops. One involved buying land and reselling it to landless people whose makeshift homes were swept away by Super Typhoon Haiyan in November 2013.

Another example concerned three kidnapped young people who were killed and buried in a shallow grave beneath concrete and dirt. Their people were afraid to go and exhume the bodies for fear they would be killed, but they were “emboldened” when Northern Luzon Bishop Renato Abibico and two priests came to the graves and began digging.

Thirdly, Malecdan said, the ECP’s relationship with the Church of the Province of Myanmar as that country transitions to democracy is a way for each church to learn from the other.

“Our relationship and concern for one another is a clear testimony to a conflict-laden world,” the prime bishop said.

Malecdan also outlined how the ECP became a self-supporting province after making a “heart-rending decision” to stop receiving money from the U.S.-based Episcopal Church.

The church was receiving a subsidy from the Episcopal Church that was due to end in 2007. The ECP decided in mid-2004 to ask that it be stopped. Because the money was already budgeted, Malecdan said, the Episcopal Church decided to continue sending the payments while the ECP decided to stop using the subsidy as operating revenue. It put the money into an endowment with the aim of becoming self-sufficient.

The church built many churches after that decision, had budget surpluses and saw both lay and ordained vocations increase, according to the prime bishop.

“We have dug deeper into what we have – all our assets as a church – and started maximizing them for doing mission,” Malecdan said. “And we realized that even a struggling church can have something to share with others.”

Also on Sept. 22, the bishops received briefings on the work of the Task Force for Reimagining the Episcopal Church, which recently released a letter to the church outlining the recommendations on structural change it will make to the 2015 meeting of General Convention. Bishop members of the A050 Task Force on the Study of Marriage and the Joint Nominating Committee for the Election of the Presiding Bishop discussed the work of those groups to date. While only the latter session had been scheduled to be closed, it was announced during the morning session on Sept. 22 that all three of those briefings would be for bishops only.

Shortly after the afternoon private session ended, the marriage task force released a report to the church on its work.

The bishops plan a town hall-style session with the presiding bishop and a formal business session on Sept. 23, the final day of the meeting.

After the meeting ends a number of bishops are heading to Japan, Hong Kong, the Philippines or Korea to continue learning about mission and ministry of the Anglican Church in those contexts.