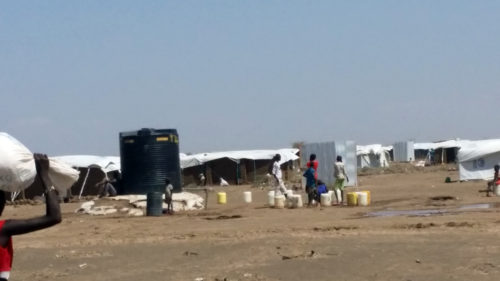 South Sudanese refugees at the Kakuma Camp in Kenya collect water for their families.

“I was in Juba when the fighting broke out [on Dec. 15, 2013],” Rambang, 26, told the Episcopal News Service (ENS) recently from Nairobi, Kenya. “I was almost killed; they targeted 25 of my neighbors, who were killed.”

He escaped to the Kakuma Refugee Camp in northern Kenya, only to discover violence there also. “Everyone was angry. They want to push, and shove. It is not good for people to live like this. I had to come up with something to bring the youth together. That was when I came up with South Sudan Youth for Peace and Reconciliation (SSYPR).”

The initiative aims to gather varying communities of Sudanese youth in the camp for a series of sports tournaments paired with peace and reconciliation trainings and other activities. Sowing a spirit of cooperation will also help improve conditions generally in the camp, according to John Malek Kur, also involved in organizing SSYPR’s efforts.

“We will help to create a condition whereby we can see where we can reconcile, and counsel them because of the dramatic things they have seen, since war broke out in Juba and elsewhere,” Kur told ENS.

“We need to teach them so we can send a team to go and teach and talk peace among the people, and we will extend it slowly to the areas affected by the war,” Kur added.

South Sudan emerged as the world’s newest nation in 2011, with Juba as its capital city. Fighting erupted in December 2013 after a political struggle between the president, Salva Kiir, and his former deputy, Riek Machar, displacing as many as one million people. Kiir is from the Dinka tribe and rebel leader Machar is Nuer, representing the two main Sudanese ethnic groups. Many fled to the Kakuma Refugee Camp, which was established in 1992 during decades of Sudanese civil war. An estimated 180,000 people from Sudan, South Sudan, and other African countries reside at the camp.

Kur, a former “Lost Boy” now studying peace and conflict transformation at Nairobi’s Daystar University, said camp conditions are challenging. Illness, illiteracy and hunger are pervasive, he said. (The Lost Boys and Girls of Sudan moved to the U.S. as part of a resettlement program in the early ‘00s.)

“We have a diverse community in South Sudan and in Camp Kakuma, young people on both sides and the only thing you can do is speak a word of peace to them through soccer. They will play for fun and for a goal,” Kur said. “When they will be working for that goal, they will start talking, realizing their worth, and making friendships among themselves.”

SSYPR advisor Bishop John Gattek Wallam of the Bentiu area of the Diocese of Malakal said the plan includes university students serving as trainers for the camp’s youth. The initiative is working in tandem with other like-minded organizations under the umbrella of the United Nations High Commissioner for Refugees seeking peace and reconciliation, he said.

“The youth are the children of the warring parties [and from different tribes]. Both sides will be able to come together and learn peace and reconciliation,” Wallam told ENS from Kenya recently.

The games “will be an outlet for the youth, to participate in peace-building activities. We will organize a program for them, and a concert that will also bring the youth together and also give them reconciliation messages from the Bible,” said Wallam. He was part of a negotiating team that has secured the endorsement of the United Nations and the Kenyan Police Camp manager to establish the Kakuma Peace Initiative and Sports for Peace games.

A tentative date to host the games awaits securing project funding and sponsorships, according to the Rev. Jerry Drino of Hope with South Sudan, a San Jose-based education and outreach agency.

“This whole effort is lifting up from the ground,” said Drino. Faith communities are at the forefront of the efforts, as are organizations like the American Friends of the Episcopal Church in Sudan (AFRECS), and Episcopal Relief & Development who are working to alleviate hardships in Sudan, he added.

Pockets of hope exist amid the continuing crisis in Sudan, Drino said. He urged Episcopalians across the church to support the organization of fledgling peace efforts.

“The good news is that already there are sporadic games with mixed tribal teams being played in Kakuma and that the Mothers Union and Presbyterian women are coming together to pray across tribal lines. The SSYPR will give them greater incentive to continue and expand this work.” 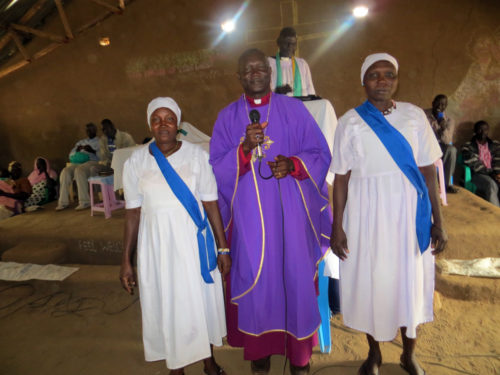 Bishop Andudu Elnail of Kadugli and South Sudanese members of the Mothers’ Union participate in a worship service at the Kakuma Camp in Kenya.

Colorado: October visit to offer medical, pastoral care training,
A medical and pastoral care team from the Diocese of Colorado, seeking to alleviate refugee camp conditions and to support the efforts of Sudanese Bishop Andudu Adam Elnail of the Diocese of Kadugli, is planning an Oct. 28-Nov. 9 trip to the Kakuma Refugee Camp, according to Anita Sanborn, president of the Colorado Episcopal Foundation.

The team initially intended to visit the Yida Refugee Camp in South Sudan in January of this year, Sanborn said. But the trip, funded by the United Thank Offering (UTO) and Episcopal Relief & Development and private donations, was rescheduled for the Kakuma Camp after the December fighting broke out.

The team focus will include newborn and maternal health, basic hygiene and health care, identifying symptoms of trauma and self-care for clergy and lay leaders.

“There will be a segment on human rights, teaching what the United Nations Declaration of Human Rights is all about, so people understand in this time of exile what their rights really are and to give them a sense of hope that they don’t need to be landless forever, but to prepare for a time when they can return home,” Sanborn added.

Sanborn described Elnail as a bishop without a diocese. ENS’s efforts to reach him were unsuccessful.

Elnail was in the United States for medical treatment in 2012 when Sudanese government forces entered Kadugli, raided his office, destroyed some equipment and confiscated others, Sanborn said. He began advocacy efforts and in 2013 was granted U.S. asylum. He organized an office in Juba to provide a base of operations for the thousands of Nuba people fleeing into the South.

Sanborn also urged Episcopalians across the church to continue support for the Sudanese people, even though media focus may have shifted elsewhere.

“When compassion fatigue seems so pervasive, it would be my hope that we in the Episcopal Church here continue to stand by the Sudanese refugees who’ve been sent here,” Sanborn said of Sudanese communities throughout the United States.

“There are so many ways people can get involved,” she added. “It doesn’t have to always mean going to Sudan. It’s important to be aware and to be educated about what is going on, if people will just take that step. And to remember that prayer is always needed.”

The U.S.-based Episcopal Church has long-standing partnerships with the Episcopal Church of Sudan and South Sudan, through companion diocese relationships, Episcopal Relief & Development programs and the advocacy work of the Office of Government Relations.

Partnerships also exist through various networks such as the American Friends of the Episcopal Church of Sudan and Hope With South Sudan.