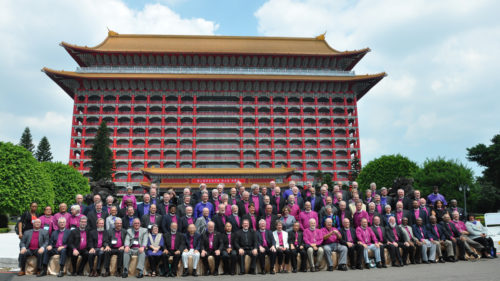 Bishops attending the Episcopal Church House of Bishops meeting in Taipei, Taiwan pose for a group photo on Sept. 17 outside the historic Grand Hotel, site of the meeting. It was 97 degrees at the time of the photo session, which considering the 50 percent humidity, felt like 109. Photo: Mary Frances Schjonberg/ Episcopal News Service

[Episcopal News Service – Taipei, Taiwan] In a historic year for the Episcopal Church’s Diocese of Taiwan, the House of Bishops has come to this city to “learn of greenness in different pastures,” in Presiding Bishop Katharine Jefferts Schori’s words.

The theme of the Sept. 17-23 fall Taiwan meeting is “expanding the apostolic imagination” and the bishops will explore the mission and ministry of the Diocese of Taiwan. In addition, bishops and others from the Anglican Church in Hong Kong, Japan, Pakistan, the Philippines and Korea will discuss with the house the theological context and mission challenges their provinces face.

After the meeting ends a number of bishops are heading to Japan, Hong Kong, the Philippines or Korea to continue learning about the mission and ministry of the Anglican Churches there.

The Diocese of Taiwan is celebrating its 60th anniversary this year. The bishops agreed to meet here at Taiwan Bishop David Jung-Hsin Lai’s invitation. 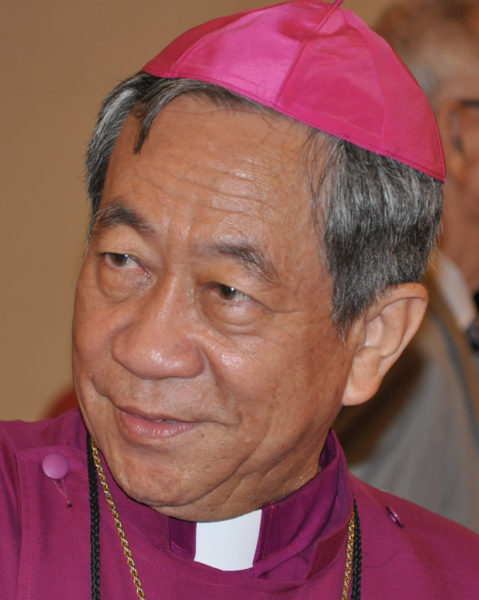 During the house’s opening session on Sept. 17, Lai thanked the bishops, many of whom had traveled as much as 24 hours to get to Taipei, for making the effort to come, saying that his six-year-old dream of having the House of Bishops come to his diocese had come true.

“You come here to share, to learn, to strengthen your wisdom and knowledge,” he said.

The entire diocese has prayed at 9 p.m. every day for 40 days for the success of the House of Bishops meeting, according to Lai.

He acknowledged that many of the bishops were feeling jet-lagged after their travels and he jokingly told them that now they know how he has felt at every House of Bishops meeting since his election in 2000.

Jefferts Schori had said during a news conference at the end of the last House of Bishops meeting in March that Lai’s invitation “seemed like a remarkable opportunity for the bishops in this church to learn something about the Asian context in which the church has relationships, and also increasingly from which other parts of the Episcopal Church are receiving migrants.” 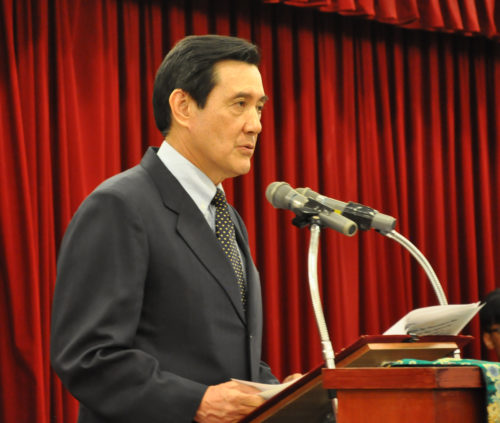 Taiwanese President Ma Ying-jeou told a reception on the evening of Sept. 17 (local time) that Chinese tradition marks time in 60 year periods and thus the Diocese of Taiwan has completed one cycle and is embarking on a new one “that foretells an unlimited future.”

“So the Episcopal Church couldn’t have picked a better year to hold a House of Bishops in Taiwan,” he said. “Your choice shows the importance you place upon your congregations here and upon my country. For this, I am grateful.”

Ma said he wanted to express personally his “deepest respect and thanks” for the way that the Episcopal Church has “actively preached the gospel” through service to its communities both in Taiwan and around the world.

The Taiwanese president then outlined his efforts toward turning his country into a peacemaking nation and one known for providing international humanitarian aid rather than receiving it, based on the biblical call to love your neighbor as yourself.

The House of Bishops’ opening Eucharist earlier in the day marked the feast day of Hildegard of Bingen. Jefferts Schori noted in her sermon that Hildegard used the concept of viriditas and its sense of the fecundity of the earth and the soul to teach people about the “blazing fire of creativity at the heart of God.” The presiding bishop likened viriditas to Jesus’ call to abundant life.

Where, she asked the bishops, do they encounter viriditas and “what creative ferment engages and transforms you?”

“This Episcopal Church is in the throes of creative ferment, yearning to find a new congruence that will discover emerging light in new soil and refreshed growth in the plantings of former years,” she said. “Our gathering here will offer opportunities to learn of greenness in different pastures and, God willing, to transform us to discover abundance and possibility in more familiar ones.” 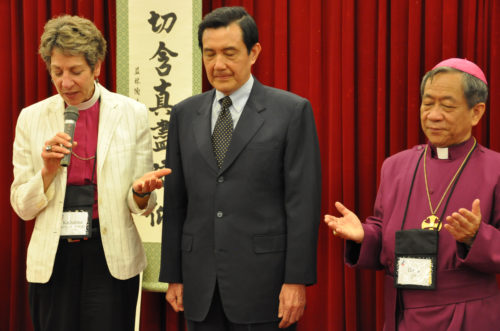 History of Anglican and Episcopal Churches on Taiwan
Anglicanism has been on the island of Taiwan since at least 1895 after the island was ceded to the Empire of Japan at the end of the First Sino-Japanese war.

From then until 1945, when Japan was defeated in World War II, the Nippon Sei Ko Kai (Anglican Church in Japan) built churches in Taiwan and held services for its Japanese citizens. Taiwan was part of the NSKK’s Diocese of Osaka. The nationalist government confiscated most of those buildings after the Japanese left and gave them to other denomination.

Episcopal Church chaplains came to serve American military personnel that were based here after the Japanese surrender. As the Episcopal Church grew, it came under the jurisdiction of the Bishop of Honolulu (later the Diocese of Hawaii). The church also took pastoral care of the former Chinese Anglican Church members who had come to Taiwan from Mainland China in 1949 with Chinese Nationalists who left in after the Chinese Communist Party defeated the Nationalist army.

From 1954 to 1960, the Episcopal Church in Taiwan was under the supervision of Honolulu Bishop Harry S. Kennedy as part of the pastoral care of American Armed Forces in the Pacific.

Kennedy remained the bishop-in-charge and Honolulu Bishop Suffragan Charles P. Gilson became bishop-in-residence in Taiwan in 1961 when the island became a missionary diocese after the NSKK handed over ministry here to the Episcopal Church.

In 1988, the diocese achieved full diocesan status. Episcopalians in Taiwan renewed their Anglican connection with Japan in 2005 when the diocese entered into a companion relationship with the NSKK Diocese of Osaka.

The Diocese of Taiwan exists in country of 23.34 million people, less than 5 percent of who call themselves Christian, according to the diocese’s Friendship Magazine. The diocese has a history of “gradual inculturation and integration” moving from a membership of Mainland China Anglicans and American military personnel to one with more Taiwanese people.

The diocese has gained members in the 10 years ending in 2012 (the latest year for which figures are available here. The diocese had 1,176 members in that year compared to 975 in 2002, and Friendship Magazine says it now serves roughly 2,000 members. The average Sunday attendance in 2012 throughout the diocese’s 16 congregations was 687.

The diocese also includes St. John’s University with an enrollment of slightly more than 6,000, eight parish kindergartens and a number of outreach centers.

Also on the bishops’ agenda
On Sept. 18, the bishops will divide themselves among Church of the Good Shepherd in Taipei, St. James Church in Taichung, Trinity & St. Stephen’s churches in Keelung and St. John’s University in Tam Sui. On Sunday, Sept. 21, bishops and their spouses and partners, and others present for the meeting will worship at either Church of the Good Shepherd and St. John’s Cathedral in Taipei or Advent Church in Tam Sui. They will return to Taipei in the late afternoon for a session aimed at processing their experiences.

The evening of Sept. 21 will also include a closed “fireside chat,” meant for the presiding bishop and the bishops alone.

While in Taipei, the bishops are also scheduled to receive briefings on the work of the Task Force for Reimagining the Episcopal Church, which recently released a letter to the church outlining the structural changes it will recommend to the 2015 meeting of General Convention. Bishop members of the A050 Task Force on the Study of Marriage and the Joint Nominating Committee for the Election of the Presiding Bishop will also discuss the work of those groups to date. The latter briefing will be held in closed session, according to the meeting schedule.

The bishops also plan a “town hall”-style session with the presiding bishop and a formal business session on Sept. 23.

The meeting is taking place at the Grand Hotel in Taipei. Some bishops are blogging from the meeting about their visit to Taiwan. Others are tweeting during the meeting using #HOBFall14. Those tweets can be read here.