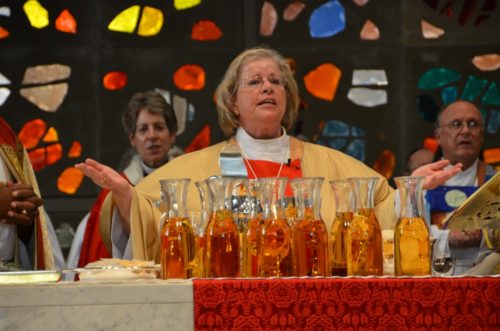 Bishop Suffragan of Maryland Heather Cook celebrates the Eucharist during her service of ordination and consecration to the episcopate. Photo: Richard Schori

[Episcopal News Service] The Episcopal Diocese of Maryland ordained and consecrated the Rev. Heather Elizabeth Cook as its suffragan bishop on Sept. 6 during a service at the Episcopal Church of the Redeemer in Baltimore.

The service featured participants from across the diocese, as well as Cook’s family, friends and people from past ministries. To honor her early years in Baltimore and her Episcopal education, a student from St. Paul’s School for Girls, Brooklandville, led the opening procession of the service with the school’s flag. Cook graduated from St. Paul’s School for Girls in 1974.

Presiding Bishop Katharine Jefferts Schori served as the chief consecrator. Following the service, Cook offered blessings at the altar of the church.

A video stream of the service is available here. 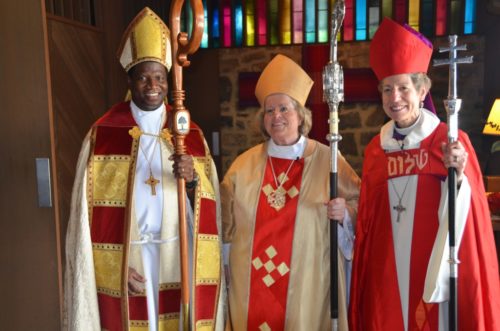 Cook was ordained to the priesthood in April 1988. She has served as a boarding school chaplain at Stuart Hall in Staunton, Virginia; assistant rector at St. Matthew’s Episcopal Church, Bedford, New York; rector of St. Andrew’s Episcopal Church, York, Pennsylvania; canon for mission in the Diocese of Central New York; and canon to the ordinary in the Diocese of Easton on the Eastern Shore of Maryland.

Cook is the first woman to be elected a bishop in the Maryland diocese. She was elected bishop on May 2 on the fourth ballot from a slate of four nominees.