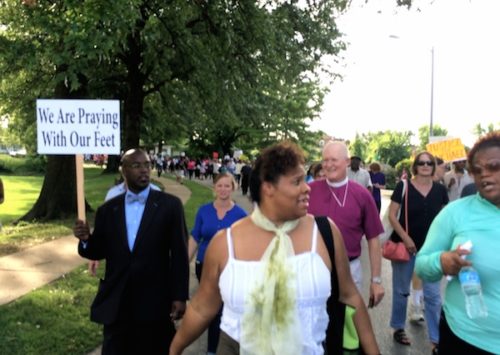 [Episcopal News Service] The Rev. Teresa Mithen-Danieley gambled “there probably wouldn’t be tear gas” and took her two-year-old daughter Ruby Frances with her to the Aug. 14 march in Ferguson, Missouri, to begin to rebuild community trust after the Aug. 9 fatal police shooting of an unarmed black teenager and its violent aftermath.

Along with Missouri Bishop Wayne Smith, she and other Episcopalians joined at least 1,000 other clergy, public officials, residents and supporters in the nearly two-mile march in Ferguson with clergy positioned on the perimeters and ends, according to Mithen-Danieley.

“We wanted to try to be clear to anybody that wanted to participate in the march and to the police and to the public that this is a nonviolent event, and that we were all there in solidarity with the people of Ferguson.”

As marchers approached the Canfield Green apartment complex where 18-year-old Michael Brown was fatally shot Aug. 9 “we were walking down into a valley of ranch-style homes and you could see how the whole neighborhood was tear-gassed,” she said.

“You could see how the tear gas was used, it permeated the whole area,” said Mithen-Daniely, rector of St. John’s Episcopal Church in Tower Grove near St. Louis.

The shooting — and the level of police violence directed at the predominantly African American community in its aftermath — has re-opened old wounds and painfully exposed racial and economic divides in the suburban St. Louis community of about 21,000.

And the Aug. 15 police statement naming the officer involved in the shooting and identifying Michael Brown as a robbery suspect didn’t change any of that, according to Bishop Smith.

“It’s unfortunate timing, that the mention of Michael Brown as a suspect was released at the same moment as the name of the officer was released,” he told ENS on Aug. 15. “It just did not seem right. It is absolutely a red herring when it comes to the shooting itself.”

The lingering effects of the spiritual violence of racial and economic injustice “are not new to us; it’s something we’ve had to face for a long time,” added Smith, who in a statement on the diocesan website called upon all Episcopalians “especially those whose race or culture gives innate privilege, to look upon what has been laid bare, to pray about these things, humbly to learn from them, and to yearn and work for responses that would bring justice.”

While traveling to Ferguson from Christ Church Cathedral in St. Louis for the Aug. 14 march Smith said: “I passed by Calvary Cemetery, where Dred Scott is buried, and I thought of that long and painful history that we’ve had with race relations here in St. Louis city and county.”

A slave, Dred Scott sued to gain his freedom in a landmark case that eventually reached the U.S. Supreme Court. In 1857, the court ruled that because Scott was black, he was not a citizen and therefore had no right to sue.

Smith said that he joined the march at the invitation of the St. Louis Metropolitan Clergy Coalition “a predominantly African American organization. We sent out email notification to clergy and laity and I really was heartened by the strong support,” he said.

“I hope that our church really can follow the lead of what the community in Ferguson and surrounding communities need and want. We have to respect their integrity and authority,” he said.

During the march Smith said he “walked with a young man from Morehouse College who drove from Atlanta with Ruby Sales” who had been invited to speak at a local event.

“He wanted to be involved with conflict resolution in St. Louis and asked for my contact information,” Smith said. “I mentioned to him that yesterday was the feast of Jonathan Daniels” the Episcopal seminarian who died when he pushed Sales out of the way of a shotgun blast during the 1965 civil rights Freedom Summer in Hayneville, Alabama.

‘A huge poverty of trust’

The Very Rev. Mike Kinman, dean of Christ Church Cathedral in St. Louis, said after the Aug. 15 release of the officer’s name and information naming Brown as a robbery suspect that “the situation is changing moment by moment.”

The timing of the release “speaks to the huge poverty of trust in our community; that’s one of the central issues here,” he said. “There has been over time an incredible deterioration of trust between the black community in St. Louis and the police department and the institutions of justice in general, and not just in Ferguson, but the whole metro area.”

On Aug. 14, Missouri Gov. Jay Nixon took supervision of security in Ferguson away from the local police and gave it to Highway Patrol Capt. Ronald S. Johnson, and he promised a change in tone from what the Rev. Steve Lawler and others had called “a militarization” of the police.

State police joined with demonstrators during the Aug. 14 march. Noticeably absent were the riot gear, semi-automatic weapons, armored vehicles and excessive show of force previously used by the Ferguson police, he said.

“That’s been the biggest shock, the biggest surprise, the police response,” said Lawler, rector of St. Stephen’s Episcopal Church (http://www.saint-stephens.info) in Ferguson. “It’s really been intense, and it seems like it’s accelerated rather than decelerated the figuring out how to get folks back to working together.”

Chester Hines, chairperson of the diocesan commission on dismantling racism was leading an anti-racism training in Sikeston, 145 miles south of St. Louis, that had been previously scheduled “before Ferguson blew up.”

But he wasn’t surprised at the shooting or the violence, “as a result of my own experience with racism in this community for over 60 years now,” he said. “The reason I do this work is because of my own personal experiences of living with racism in St. Louis.”

And, he said, the same circumstances in Ferguson are present in other communities. The difference is “Ferguson has a large enough population of people of color, that they were able to stand as a community against the forces of the police department. In most of our suburban communities people of color are really in a minority so they actually have very limited voice or impact.”

Engaging ‘the Power of the Gospel’

Yet, in spite of it all, Lawler said “the power of the Gospel” has been palpable.

St. Stephen’s food pantry desperately needed restocking; many local businesses were closed and residents were reluctant to venture out because of the massive police presence, he said.

“We couldn’t get food and we knew that this is the time of year when people have to buy school supplies and other things,” he said. “Monday would have been the first day of school for the local school district.

But the response was overwhelming, as diocesan congregations, community organizations and individuals flooded the food bank with food and personal items. For instance, Lawler said, “a guy I know who toggles in and out of being homeless but who stopped by and handed me a couple of cans of baked beans, which I know is probably half of the food he had for the day, if that.”

“Another guy, whose son was in the wrong place at the wrong time, buying weed and was shot and killed a couple of weeks ago, came by with food, with such compassion for the community. There’s a level of connectivity that’s been here throughout, in the midst of all this.”

Planning for additional prayer vigils, demonstrations and events is also underway, as the community begins to grapple with the long-term and challenging work of rebuilding trust and engaging reconciliation.

Chuck Wynder, Episcopal Church missioner for social justice and advocacy said he has been working closely with his colleagues Missioner for Racial Reconciliation Heidi Kim and with Alex Baumgarten, who directs the church’s Office of Government Relations, “to see how we can companion the folks there and how we can support the diocese and the community.”

“We want to make sure our witness and our advocacy is present both locally and church-wide and facilitate our missional response so that other parts of the church beyond Ferguson and the Diocese of Missouri know the church is present in the midst of all this,” he said.

The Rev. Mike Angell, who as Episcopal Church missioner for young adult and campus ministries is based in St. Louis, said he wrote a question and answer sheet to help college students and young adults discuss the ramifications of the Ferguson tragedy.

Beginning the hard task of reconciliation

Coming together and moving forward is a long-term challenge, Angell said. “It’s an issue of systemic racism,” he said. “We have a crisis in our country that broke through with what happened with Michael Brown. It’s ongoing. We have a lot of work to do today and isn’t the church exactly the place where we should be doing it?”

“There’s been some immediate response this week, and I’m glad of that,” said Mithen-Danieley who grew up in Normandy, a community adjoining Ferguson. “But I want a long-term commitment,” she added.

“To me, it doesn’t mean much unless the diocese as a whole and the people of the diocese continue to be invested and engaged in long-term economic justice and racial justice in our region. Unfortunately, this tragedy has helped people to see there are a lot of tensions that have been going on my whole lifetime, and I’m 37,” she said.

“I hope this is an opportunity to bring this to the wider church, how racial and economic justice are tied together and that this is a long-term problem that’s not going to go away when the marching stops.”

“Right now, it’s in the media, we’re riled up about it and that’s important and that’s good. But the issues this is all about are power and privilege and race and class and they have been around a long time. This will take a sustained effort to deal with.

“And it’s going to take people of power and privilege and that’s most of us white Episcopalians and white St. Louisans; it will take us becoming educated and becoming really good listeners and examining how we are being called to change some of these systems that led to the killing Michael Brown.”

The cathedral is having conversations about being part of that ongoing educational process, “and of healing, not healing to a point where everyone’s just sort of quiet again, but healing to where we reach a different level,” he said.

“We’re never bringing Michael Brown back, but somehow that this can be redeemed,” he said.

“It’s so easy in moments like this to cast one side, one person, one group of people as completely good and the other side as completely evil and we have to resist that at all costs. But, we are called to be ambassadors of Christ and ministers of reconciliation and we stand with everyone. We have to call all of us to be those images of God that are our best selves.

“That’s the long-term work of the church, to build relationships of love and respect with everybody so we can bring people together and say let’s listen to everybody and look at who God is calling us to be.”