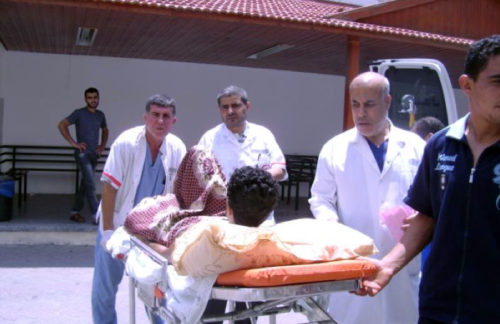 Medical staff at the Ahli Arab Hospital in Gaza receive a patient at the Episcopal Diocese of Jerusalem-led institution.

[Episcopal News Service] Religious and political leaders have stepped up their calls for a permanent ceasefire to the three-week-long conflict between Israel and Hamas, as the number of casualties topped 7,000 and the death toll reached 1,200.

“The continued and escalating violence in the land of the Holy One, the slaughter of innocents by actions of both sides, and the rigidity and absence of true political leadership is making the world weep,” Presiding Bishop Katharine Jefferts Schori wrote in a statement e-mailed to ENS. “God weeps as well, as brother kills brother. Will we permit Cain and Abel to play out their brief and bellicose act, or will we demand an end to this depravity? No one will live in peace in the Middle East – or the world – while this carnage continues. Pray for peace, shelter the innocent, support every humanitarian response, and insist on an end to this inhumanity.”

Since its Operation Protective Edge began on July 8, Israel has intensified its bombardment of Gaza in response to actions by Hamas, the Islamist militant movement that controls Gaza and continues to fire rockets into Israel. Several attempts at a ceasefire have collapsed.

On July 29, Gaza’s only power plant was destroyed as Israel targeted sites linked to Hamas. Meanwhile, Israel continues to intercept Hamas rockets over central and southern parts of the country. Fifty-three Israeli soldiers and more than 1,200 Palestinians, mostly civilians, have been killed in the fighting.

“Like so many Episcopalians and others who have been in close contact with the U.S. government throughout these past dark weeks, I am grateful for the fair and determined leadership of Secretary of State John Kerry and other global leaders toward a ceasefire, but deeply frustrated that those efforts have yet to bear meaningful fruit,” Alexander Baumgarten, the Episcopal Church’s director of government relations, told Episcopal News Service.

“The most important thing Episcopalians can do at the moment is what so many have been doing: praying without ceasing; supporting the ministries of the Diocese of Jerusalem in Gaza and elsewhere; and challenging our political leaders to demand peace and stand in solidarity with both Israelis and Palestinians who yearn for peace are paying the unimaginable cost of continuing warfare,” he added. “If and when a ceasefire comes, the work of peacemakers will be as urgent as ever, as a just and lasting peace can only come through a negotiated solution between Israelis and Palestinians that provides two secure and viable states for two peoples.”

The Rev. Canon John Organ, speaking by telephone from East Jerusalem, where he serves as chaplain to Anglican Bishop in Jerusalem Suheil Dawani, agrees that the road to peace is through a two-state solution, an objective long supported by the Episcopal Church and many of the Anglican Communion provinces.

“It doesn’t help to be pro this and anti the other,” Organ said. “We need to be pro-Israeli and pro-Palestinian. We don’t have to take sides. But we do have to stand up for justice and stand against this occupation.”

Archbishop of Canterbury Justin Welby, in a July 29 statement, said that “only a costly and open-hearted seeking of peace between Israeli and Palestinian can protect innocent people, their children and grandchildren, from ever worse violence … We must cry to God and beat down the doors of heaven and pray for peace and justice and security.”

In Gaza, the Ahli Arab Hospital, an institution of the Episcopal Diocese of Jerusalem, has continued against all odds to provide emergency medical care for many of the wounded, as its staff members work around the clock, putting their own lives at risk for the sake of others.

Organ, who speaks with hospital director Suheila Tarazi on a daily basis, said that on July 29 many of the staff could not get to the hospital because it was too dangerous for them to travel from their homes, but that today those already at the facilities were being advised not to leave. “The hospital is working at full capacity around the clock, taking in additional patients as it is able to,” he said.

Through the support of the Episcopal Diocese of Jerusalem and various partners, on July 29 the hospital received 5,000 liters of fuel for its generator, a critical resource to run life-saving medical equipment, especially following the destruction of the power plant.

Bishop Barry Howe of West Missouri said that through the hospital “the Episcopal Church is there to offer healing and the embrace of compassion to all God’s children.”

Howe, as chair of the board of trustees for the American Friends of the Episcopal Diocese of Jerusalem, said, “We’re so very grateful for the outpouring of support at this critical time. 100% of each gift goes to those who are suffering and to support people who are ministering to their needs.”

In its July 29 newsletter, AFEDJ reported that a portion of the hospital’s outer wall has been destroyed and that the main steam line into the hospital has been damaged, meaning there is now no hot water. Large pieces of shrapnel have reportedly hit patients’ rooms and the laundry.

“There is an immediate need for repairs to ensure patient safety,” the newsletter stated.

“Al Ahli Hospital has become a refuge for families who are suffering, homeless and afraid,” said Anne Lynn, AFEDJ president, in an e-mail to ENS. “The doctors, nurses and support staff at Al Ahli Hospital, despite exhaustion and fear, despite deplorable conditions and chronic shortages, still provide compassionate care to each and every patient. They deserve, and have, our respect, our prayers and our support.”

Welby expressed his “utmost admiration” for all involved in the humanitarian efforts on the ground in Gaza, “not least the medical team and staff at Al Ahli Arab Hospital. Providing relief and shelter for those displaced is a tangible expression of our care and concern, and I encourage Church of England parishes and dioceses, as well as the wider [Anglican] Communion, to pray for them and support the Diocese of Jerusalem’s emergency appeal.”

The Episcopal Diocese of Jerusalem launched an emergency appeal for the hospital on July 14, while Episcopal Relief & Development encourages ongoing support through its Middle East Fund.

Said Welby: “While humanitarian relief for those civilians most affected is a priority, especially women and children, we must also recognize that this conflict underlines the importance of renewing a commitment to political dialogue in the wider search for peace and security for both Israeli and Palestinian. The destructive cycle of violence has caused untold suffering and threatens the security of all.”

Jerusalem, about 50 miles from the Gaza Strip, has been a very different place – full of tension of fear – since the offensive began, Organ told ENS.

Late last week, Organ was driving back to Jerusalem through the West Bank and just before reaching Nablus, he encountered a demonstration in opposition to the conflict. “Then all of a sudden there was shooting and several Palestinians died. We had to drive through fires and debris,” he said. “So we are surrounded by this. The loss of life on both sides is tragic.”

In addition to targeting Hamas militants, Israeli airstrikes have attempted to destroy a network of tunnels in and out of Gaza, where Israel and Egypt have enforced a blockade since 2007. The Israeli government has said it will not stop the offensive until the tunnels are destroyed and Hamas has said it will not stop firing rockets into Israel until it ends the blockade.

Earlier this week, Israeli Prime Minister Benjamin Netanyahu vowed a lengthy campaign in Gaza, saying the region had to be demilitarized in order to protect Israel. “We will not end the operation in Gaza without neutralizing the terror tunnels, which have the sole purpose of destroying our citizens, killing our children,” he said.

Meanwhile, the United Nations Relief and Works Agency reported that some of its staff members had been killed and that the U.N. is currently caring for 182,604 Palestinians in its 82 shelters in Gaza.

Archbishop Thabo Makgoba of the Anglican Church of Southern Africa called the conflict in Gaza “senseless [and] unnecessary.”

“No war will bring peace and security to Israel and Palestine, in particular not when it involves the heartless use of brute force which has been deployed in the past week,” he said in a July 29 statement, adding that he “joins those who are calling for a conversion of brief suspensions of hostilities into a permanent ceasefire.”

Anglican Bishop in Jerusalem Suheil Dawani, along with the patriarchs and heads of churches in Jerusalem, has called “upon both sides for an immediate ceasefire and the urgent resumption of peace talks.”

American Friends of the Episcopal Diocese of Jerusalem