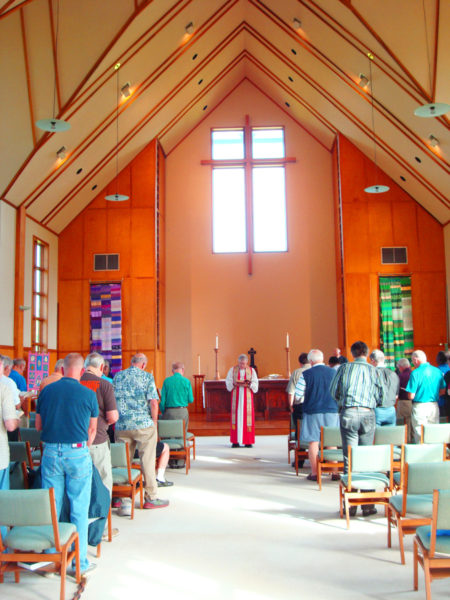 A half-way house to help parolees adjust to modern society is being planned by the Brotherhood of St. Andrew.

A site in Texas has been selected and brothers meeting in Mississippi June 10-15 heard reports from the organization’s prison ministry volunteers who say such a facility is “sorely needed.”

The proposal was delivered to the brothers during the 134-year-old ministry’s annual national council meeting held this year at the Bishop Duncan Gray Camp and Conference Center, a 700-acre facility of the Episcopal Diocese of Mississippi.

The Brotherhood of St. Andrew is a vital part of Episcopal Men’s Ministries, with 4,212 members in 355 chapters nationwide.

For inmates who have served many years behind bars, the demands of adjusting to the pace of 21st Century life “are enormous,” Brother Jerry Bailey of Cleburne, Texas told the 34 brothers attending the organization’s national council meeting north of Jackson, Mississippi.

Prison ministry and restorative justice has become a major ministry for brothers in Texas, New Jersey and South Carolina, among several sites.

“It’s the most rewarding type of ministry I’ve been involved with,” Bailey said. He’s helped inmates for 30 years and has noticed it’s becoming “more and more difficult for former inmates to succeed once they leave prison.

“The number of choices they have to make every day is enormous,” Bailey, a prison chaplain, said. “It overwhelms them and they find it’s easier to return to old patterns of living. Having a place they can go to live until they can get on their feet, find jobs and receive counseling is sorely needed.”

The Brotherhood needs the wisdom of its entire membership to seek and find funding from a myriad of federal, state and private funding sources, Bailey said.

“There is grant money available as well,” Bailey said.

While some brothers expressed skepticism about raising, say, $500,000 dollars to get the project off the ground and up-and-running, the council unanimously agreed to back the project and begin the legal processes necessary to acquire a 20-acre site south of Fort Worth.

“This property is available to us, it’s centrally located in the middle of the country and it could serve parolees from throughout the country,” Bailey said, noting that Texas has the largest number of prison inmates in the U.S.

Brothers agreed that such a major project should be well within the scope of the organization’s membership.

“We are men of God and we are capable of great things,” Vice-President Julian Korti said.

Ugandan ministry
Korti also delivered a report on the Brotherhood’s longtime involvement in Uganda, where some 40 young people housed in foster homes receive educational and other funding support from brothers throughout the U.S.

“We would still like to establish a non-profit agency not run by the Brotherhood nor the Episcopal Church to receive funds from corporations and other organizations that will not donate funds to religious organizations,” Korti says.

He’s hoping to put together a team to complete Hope International Services (HIS) this year.

“African ministry is difficult and full of disappointments as well as successes,” Korti reported as he told the brothers about the plight of the first Brotherhood-educated student to receive a Ph.D. in mathematics.

“He was prepared to begin teaching mathematics but soon fell ill to a heart defect and returned to Mukono, where he helps teach the young students,” Korti reported. “He is a valuable member of our Ugandan Brotherhood, but this is often the way it is in Africa – one step forward and one step backward.

“We pray for his return to health.”

Rebuilding the infrastructure
Brother Jeff Butcher is vice president of field operations and he was recognized by Brotherhood President Robert Dennis for his “excellent and hard work” filling open positions at various assembly and diocesan levels.

For the second year in a row, chapters and assemblies took on special service projects in April during National Service Day.

“National Service Day has been a big success,” Dennis said. “The Methodist and Lutheran churches also conduct national service days in April and it gives us a good feeling to join our Christian brothers and sisters to reach out and help other in His name.”

While Butcher is concentrating on human resources, Benavides has created social media sites. He has designed a Facebook page (Brotherhood of St. Andrew USA), Twitter account (Brothers Andrew-BStA) and a soon-to-come blog site.

The process of creating a new web site for the organization utilizing the services of Digital Faith, which specializes in interactive sites that allow members (Brothers) to freely contribute in many ways, has also begun.

Former Alpha director and current Anglican Church in North America’ s Diocese For The Sake of Others Bishop Todd Hunter was the conference’s guest speaker and preacher.

He also stayed an extra day to help brothers better understand what is happening in this post-modern culture and how to “act like missionaries.”