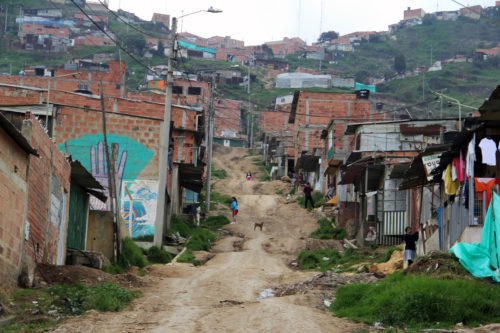 Soacha is home to more than 45,000 internally displaced people. The Episcopal Diocese of Colombia has a church in Soacha that provides space and assistance to a women’s cooperative. Photo: Lynette Wilson /ENS

“Many people need to flee their homes and their land for fear of their lives,” said the Rev. José Antonio Romero, referring to the internally displaced people who seek shelter in his church. “They had farms, homes, businesses, but because of the war, they leave with nothing.”

Families arrive at the bus station in Los Libertadores, or The Liberators, from all over Colombia, a country almost double the size of Texas with a rugged geography of mountain, rainforest and tropical plains.

They find Divine Savior by word of mouth. 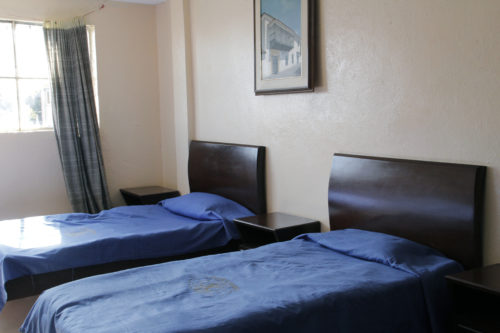 The parish began 20 years ago with a chapel, which is now the basement of a four-story building that has a kitchen, a shelter, a sanctuary and an apartment on the top floor, where Romero has lived for the past 16 years since coming to Divine Savior.

For the families that come to the city in search of safety and employment, the church provides temporary housing, food, medicine and clothing with financial support Romero says he raises through friends, while the families apply for government assistance. 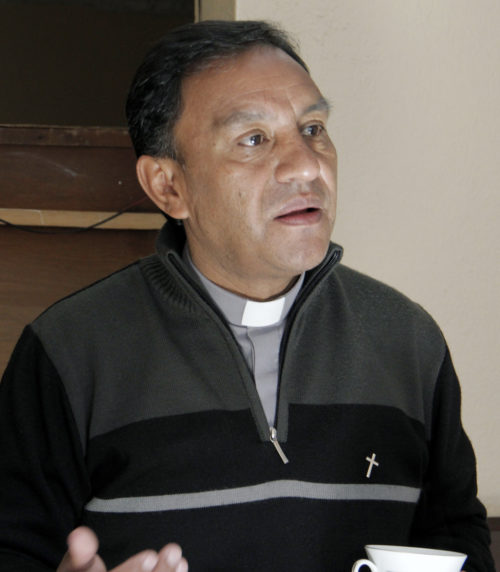 Even for those families the government determines have legitimate displacement claims – and which receive compensation sometimes in land, other times in housing – Colombia’s 4.7 million displaced people still struggle to find employment, security and often are targets of discrimination. More than half a million people have become refugees.

Since the mid-1960s government forces, left-wing guerrillas and right-wing paramilitaries have been fighting a civil war rooted in inequality that has killed more than 200,000 Colombians.  The Colombian government and the largest guerilla group, the Revolutionary Armed Forces of Colombia, or FARC, have been involved in peace talks in Havana, Cuba, since 2012. It is speculated that the country’s June 15 presidential runoff election will determine whether the peace talks – accords have been reached concerning three of five agenda items – continue.

Located on a high plateau in the Andes, Bogotá is surrounded by these informal communities populated by internally displaced people; places like San Cristobal, where Los Libertadores is located, Suba, Ciudad Bolivar, and Soacha, where Holy Spirit Mission provides space for Mesa de Organizations de Mujeres de Soacha, a women’s rights and empowerment cooperative, supported by the World Health Organization.

A working class, industrial area 40 minutes southwest of the capital, Soacha, population 490,000, is home to more than 45,000 displaced people. 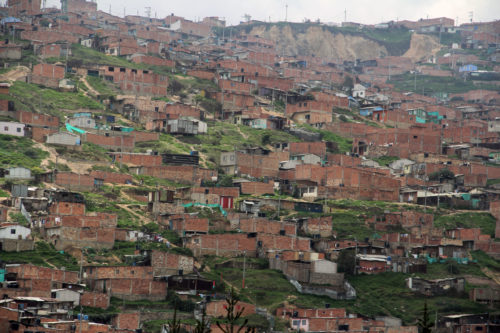 Internally displaced people live in homes built on hillsides subject to landslides, like these in Soacha. Colombia’s capital, Bogotá, is surrounded but such informal communities. Photo: Lynette Wilson /ENS

In addition to the dangers of everyday life in Soacha, where mothers live in fear that their sons will be recruited by armed groups and criminal organizations, human rights workers and community organizers face other dangers.

To engage in human rights work is perceived to be working against the state, similar to the way armed groups are seen, explained Clemencia Lopez, the cooperative’s legal representative.

Lopez and her family – she has three children, two in their teens, and the third 9 years old – were displaced three times, twice because of the armed conflict and once because of criminal activity and violence happening around them. Once there were three grenades thrown in front of the restaurant she and her husband owned, she said.

“We were in the middle of the confrontation,” she said during an interview in her office on the second floor of Holy Spirit Mission in May of 2013.

Around the time of the incident in front of the restaurant, Lopez participated in a workshop on women and gender equality; in 2007 she became involved with the women’s cooperative, which has grown to include some eight organizations.

“[In the beginning] we didn’t even know how to use computers,” said Lopez, who finished high school in 2009 by taking accelerated night classes. 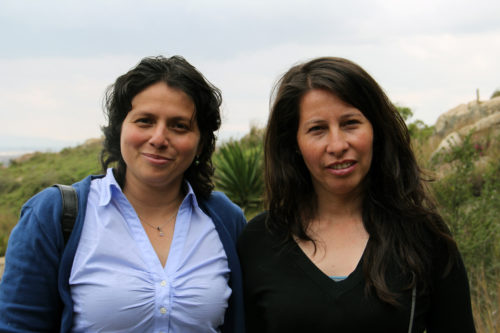 In 2012, the Colombian government adopted public policy on gender equality and a comprehensive plan against violence. Still, a 2013 report by the United Nations Human Rights Committee on the Elimination of Discrimination Against Women found “the persistence of patriarchal attitudes and deep-rooted stereotypes regarding the roles and responsibilities of women and men in the family and society.” Moreover, those attitudes and stereotypes are responsible for women’s disadvantaged position in political and public life, the labor market, the prevalence of violence against women and gender segregation, as related to educational opportunities for girls, the report said.

In addition to the discrimination displaced people experience – which is in addition to other forms of gender, race and economic discrimination – displacement puts a strain on families, with husbands and wives often blaming one another for their situation, said Lopez, adding that involvement in human rights work can also strain relationships.

“Women involved in human rights work put themselves at risk,” said Romero, who often accompanies the women in marches and demonstrations.

The women’s cooperative came to be located at Holy Spirit Church in 2010, after friends of Lopez introduced her to Diocese of Colombia Bishop Francisco Duque. Lopez has since become involved as a lay leader in the diocese.

One of the things the women have accomplished is a public policy platform for women, including the right to live a life free of violence, access to education and health care, economic opportunities, and the right to a vacation, something a life of displacement and social exclusion doesn’t afford them.

“They have dignified the role of women here in Soacha,” said Guevara, to a group of visitors in May 2013.