The Rev. Richard Kunz, former executive director of El Hogar, a home for boys and girls in Tegucigalpa, Honduras, and Charlie Nakash, an Episcopal missionary serving the Diocese of the Dominican Republic, participate in a small group discussion at the Global Episcopal Mission Network conference in Bogotá Photo: Lynette Wilson/Episcopal News Service

[Episcopal News Service – Bogotá, Colombia] An hour and half outside densely populated Bogotá in the mountains sits Mision de Santa Marta and behind it a farm.

It is the only parish in Facatativá, a municipality populated by mostly farmers and in addition the farm — which is not under cultivation because of lack of resources — the parish runs a clinic. On May 8, two busloads carrying more than 50 people attending the Global Episcopal Mission Network conference visited Iglesia Santa Maria.

Ninety Episcopalians from North, Central and South America and the Caribbean are gathered May 5-9 in Bogotá, Colombia, for the network’s 18th annual conference. This one’s theme was “Companions in Faith and Resources: Participating in God’s Mission.”

In a departure from previous GEMN conferences, in addition to mission the Bogotá conference includes a focus on financial sustainability appropriate with its taking place in Province IX, which in 2012 adopted self-sustainability as a focus.

“Ultimately, we felt that Province IX had not been that engaged in GEMN, partly because it is separated, and we wanted to connect them with their colleagues in the states,” said the Rev. Ted J. Gaiser, the network’s president and an Episcopal Church missionary serving the Diocese of Colombia. “When we approached the Province IX bishops and asked them if they want to do a conference with us, they said they wanted the theme to be sustainability because that is what they have been working on.”

Founded in 1963, the Diocese of Colombia is the youngest diocese in the Episcopal Church and one of seven Province IX dioceses spread across the Caribbean and Central and northern South America. The others include Venezuela, Puerto Rico, the Dominican Republic, Ecuador Central, Ecuador Litoral and Honduras, all of which are represented at the conference. 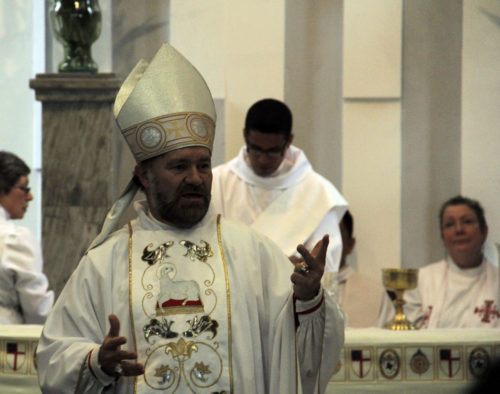 For more than 20 years, because of the ongoing civil war and narcotrafficking, Colombia has been closed off to the world, but now things are changing, said Colombia Bishop Francisco Duque-Gómez, adding that having the GEMN conference in Colombia allows attendees to see a different reality than that of the United States, and shows them and others that it’s safe to visit Colombia.

GEMN is a network of individuals, representatives of development organizations diocesan mission representative who are committed to sharing mission information and promoting mission.

The conference included plenary talks on “Financial and Economic Sustainability: A paradigm shift in the life and mission of the church,” given by Humberto Shikiya, an economist from Argentina and the director general of the Regional Ecumenical Advisory and Service Civil Association, a Christian-based nonprofit association focused on capacity building; “Theological linkages with economic sustainability,” given by Paulo Ueti, the Anglican Alliance’s Latin American facilitator; and workshops ranging from “developing project plans,” “developing a church-based foundation,” “development groups,” drawing on the strengths of the Dominican Development Group.

The Dominican Development Group was established in 1998 to assist in the development and self-sufficiency of the Diocese of the Dominican Republic, one of the fastest growing dioceses in the Episcopal Church.  In 15 years, the DDG has raised more than $10 million to finance the building of infrastructure, including churches, schools, day-care centers and medical clinics, in the Dominican Republic. It is held up as a model for self-sustainability across Province IX.

Bob Stevens, who has served the Dominican Development Group since its founding and who will retire the end of this month, said that in forming a development group it’s important that the overseas leadership and the local leadership establish strong relationships.

“It’s done through friendship. Bishop [Julio Cesar] Holguin and I are good friends. Many of the priests in the diocese are friends,” said Stevens, following the conference’s May 7 “development groups” workshop. “It’s not just about business but the common ground you travel.”

The Diocese of the Dominican Republic, which has been in existence for 116 years, has some 16 companion-diocese relationships in contrast the Diocese of Colombia has two, Connecticut and West Virginia.

In his welcome letter to conference attendees, Duque-Gómez explained that the country’s half century armed conflict, narcotrafficking and the precarious security situation that has long plagued the country — leading to the internal displacement an estimated 5.2 million people — has worked against the diocese forming partnerships.

There’s renewed hope, however, as the government and the guerillas again are attempting to negotiate a peace. In November 2012, the Colombian government and the left-wing Revolutionary Armed Forces of Colombia, or FARC, began a new round of peace talks, the second session of which is currently taking place in Havana, Cuba. Three previous attempts at peace have been unsuccessful.

On May 7, conference attendees had the opportunity to visit Mision Del Espiritu Santo, a small parish located in Soacha, a poor community on the outskirts of Bogotá populated by internally displaced people, where the church has started a program that serves single mothers and homeless women providing education, assistance with healthcare and empowerment.

In Colombia, the women explained, you can be killed for speaking publicly in defense of human rights, yet still they told the group of more than 60 people that what they are fighting for is women’s rights, including the right to live a life free of violence, access to education and health care, economic opportunities, and the right to a vacation, something a life of displacement and social exclusion doesn’t afford them. 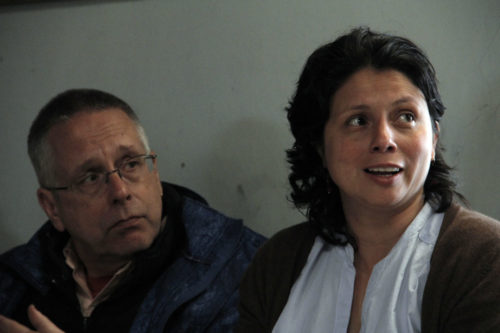 Herb Glahn, a member of Emmanuel Episcopal Church in Petoskey, Michigan, and Clemencia Lopez, of MESA, during a May 7 talk at Mision Del Espiritu Santo, a small parish in Soacha. Photo: Lynette Wilson/Episcopal News Service

“These were very courageous people,” said Herb Glahn, a member of Emmanuel Episcopal Church in Petoskey, Michigan, who visited the parish in Soacha on May 7. “They were comfortable sharing what the need and what they are working for.”

It was Glahn’s first time in Colombia, and though he knew a bit about the country from an “intellectual” level, it was the first time he’d ever had “feet on the ground,” and before the morning of May 7 he didn’t know Colombia’s 50-year conflict had resulted millions of internally displaced people.

Beginning in the 1980s, competition and disputes over land for agriculture, cattle ranching, resource extraction and coca cultivation have figured prominently in Colombia’s conflict as the armed groups have fought for control of territory. In addition to millions of internally displaced people, the situation has caused more than 400,000 Colombians to become refugees.

When asked by conference attendees about the role of the United States and multinational corporations in the internal displacement of Colombians, the women gathered at Mision Del Espiritu Santo said that governments and corporations operated differently than people and that the Colombian people feel in solidarity with the American people.

Since 2000, in the form of “Plan Colombia,” the United States has given the Colombian government more than $8 billion in military and financial aid, with some of that aid spent on protecting the interests of multinational corporations. 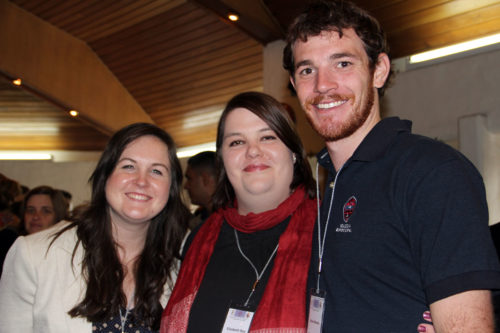 Conference attendees also had an opportunity to learn more about the social and economic situation in Colombia through mission site visits including Mision Divino Salvador, a parish in Bogotá that provides a shelter for homeless elderly people and also runs an afterschool program for area youth.

Robert Harris, a member of the Diocese of Western Massachusetts’ Global Mission Committee, attended the GEMN conference, he said, to learn more about mission in order to be a better resource to his parish and his diocese and also to discern his own call.

He found the two plenary talks on theology and economics particularly helpful. “Mission is about transformation and that is what development is,” said Harris.

It is the second GEMN conference attended by Tom and Dianne Wilson, Episcopal Church missionaries recently deployed to El Salvador. During last year’s conference in Connecticut, the Wilsons were still discerning their call to mission, they said.

“Well, we’d already discerned,” said Tom Wilson, adding that the positive reinforcement of other conference attendees affirmed their decision. “They kept saying, ‘just go,’ and it kept the momentum.”

GEMN, the largest mission group in the Episcopal Church, provides a place for people interested in mission to connect and share ideas, said Tim Skimina, chair of Companions in Christ, a Diocese of Northern Indiana ministry with the Diocese of Honduras, and a GEMN board member.

“Anyone who is interested in mission can be involved in GEMN,” he said.