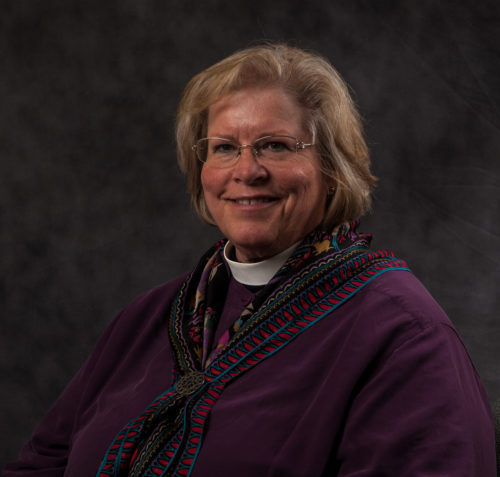 Cook is the first woman to be elected bishop for the Diocese of Maryland. The election took place during the 230th Diocesan Convention, which is being held May 2-3 at Turf Valley Resort, Ellicott City.

In a statement to the members of the Diocese of Maryland, the bishop suffragan-elect said,

“I am profoundly moved that after being ordained from the Diocese of Maryland in 1987, I am finally coming home to serve in the diocese that formed me and is in my bones. With gratitude for all who have helped shape me in ministry over the years, I look forward to crossing the Bay and exploring with you the proclamation of the life-giving Good News in a way that reaches across the generations.”

Bishops in the Episcopal Church are elected by ballot by both clergy and lay delegates. More than 440 people are attending Convention. Of that, the voting Orders consisted of 140 lay delegates representing the diocese’s 107 churches and 164 clergy. Each cleric who is canonically resident in the Diocese of Maryland has a vote. Clergy serving under the jurisdiction of the diocesan bishop are canonically resident in that diocese. The two Orders vote by ballot separately and when one nominee receives a majority in each Order of the votes cast, then that person has been duly elected.

The Rt. Rev. Eugene Taylor Sutton, bishop diocesan of the Episcopal Diocese of Maryland said, “This is a glorious day for the Diocese of Maryland as we welcome Heather Cook to the diocese and I look forward to her joining with me in our episcopal ministry.”

The Right Rev. Joe G. Burnett served the Episcopal Diocese of Maryland as its assistant bishop since April 1, 2011, following the retirement of the Rt. Rev. John L. Rabb, bishop suffragan. Bishop Burnett had planned to end his tenure as assistant bishop with the consecration of the new bishop suffragan in the fall of 2014; however his final day in the Maryland diocese was December 31, 2013. Bishop Burnett became interim rector of St. Columba’s Church, Washington, DC, on January 1, 2014. The search process began in September 2013, following Bishop Burnett’s announced call.

Consents and Consecration
The next step in the process is the Consent for Ordination, which is given by a majority of both Standing Committees and bishops of the Episcopal Church. With a majority consensus of both parties, the Most Rev. Katharine Jefferts Schori, presiding bishop of the Episcopal Church, notifies the Standing Committee of the electing diocese and the bishop-elect of the church’s consent for ordination to bishop.

With that consent, Cook will be ordained and consecrated a bishop by the presiding bishop on Saturday, Sept. 6 at the Episcopal Church of the Redeemer in northern Baltimore. As details of the Consecration become available they will be posted online at EpiscopalMaryland.org.

The Standing Committee’s role is similar to that of a board of directors. The committee serves as the council of advice to the bishop(s), and when there is a vacancy in the office of bishop, the committee performs the duties and powers of the bishop in matters of governance.