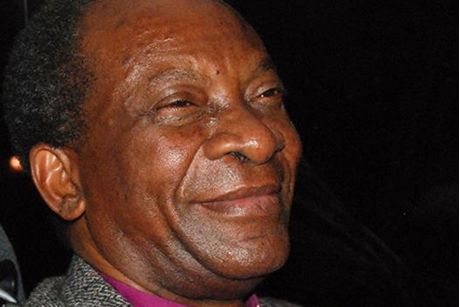 [Anglican Communion News Service] The Anglican Church of Tanzania is mourning the loss of Bishop Godfrey Mdimi Mhogolo of the Diocese of Central Tanganyika. Mhogolo served his diocese since his consecration in 1989 with distinction and dedication. He died following a severe infection in his lungs in hospital in Johannesburg, South Africa.

Mhogolo was an able theologian with a remarkable intellect. He studied theology at St. Philip’s Kongwa and in Australia, but he will be best remembered for his energy and drive. He gave purpose and direction to his diocese and inspired those around him to do great things. The Diocese of Central Tanganyika was very large and his predecessor – the late Bishop Yohana Madinda – had begun the task of enabling the emergence of new dioceses. Mhogolo took this further as a sign of success as the number of churches and Anglican Christians grew in the Dodoma region.

Theological education was a priority for Mhogolo, who considered the formation of new leaders as something vital for the church. The development of the Diocese of Central Tanganyika depended on good leadership and during his time the Bible School at Msalato developed into a Theological College of substance and significance in Tanzania with a reputation for excellence throughout the Anglican Communion. He also relied on great leadership to run the health facilitates and schools in his diocese and supported all who worked in serving the Lord. He was active in enabling local congregations in the rapidly developing city of Dodoma and throughout the rural areas of the diocese.

With his Wife Irene, the bishop championed the full equality of women, encouraging their empowerment through the Women’s Union. He was the first Tanzanian bishop to ordain women and championed their development in the church. He was a fiery opponent of Female Genital Mutilation and encouraged programs aimed at ending the practice.

During the 1990s, Mhogolo was recruited by Archbishop of Canterbury George Carey to participate in the design Group for the 1998 Lambeth Conference. He was already known in many places and he had a deep knowledge of the Anglican Communion. He developed many friendships and partnerships with Anglican churches across the world.

(The Episcopal Church and the Anglican Church of Tanzania have historic ties through companion diocese relationships, missionary work, and relief and development projects. In particular, a partnership between the dioceses of New York and Central Tanganyika, known as the Carpenter’s Kids Program, links parishes in a mutual relationship of prayer, communication, and support on behalf of the more than 2.5 million AIDS orphans in Tanzania. The Diocese of Atlanta also shares a companion relationship with the Diocese of Central Tanganyika.)

The bishop’s significance in Tanzania was marked by the president visiting him in hospital. He was a voice of peace and toleration in the great tradition of Tanzanian leaders.

Archbishop Jacob Chimeledya said: “Bishop Mhogolo was a key figure in the history of the ACT. He lived what he believed and was always honest, ready to speak the truth and challenge us all. He was also a man with a sense of joy who could lift us all with his sense of humor. We will miss him deeply.’

Canon Dickson Chilongani, the provincial secretary for the ACT, said, “We ask all in the Anglican Communion to remember his wife Irene and his children Nyemo, Lisa and Wendo and their families in your prayers as well as all his friends in Tanzania.’

The date of the funeral will be arranged over the coming days.