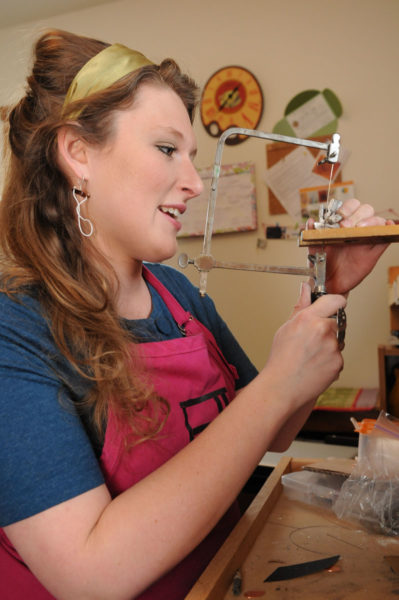 Metalworker and jewelry designer Elizabeth Stingl is one of two artists-in-residence this year at Christ Church Cathedral in Eau Claire, Wisconsin. Photo/Steve Kinderman

[Episcopal News Service] When ceramic artist Linda Vonderschmidt LaStella joined St. Luke’s Episcopal Church in Metuchen, New Jersey, she was encouraged to join The Arts at St. Luke’s. But when she attended meetings, “the only things spoken about were performance and music,” she recalled. “At the end of each meeting, I’d go, ‘Where are the ‘visuals’?”

She doesn’t need to ask that anymore. In September 2012, after two years of planning, St. Luke’s opened Nails in the Wall, a permanent art gallery that has featured work by artists from across the nation and beyond.

St. Luke’s is among a growing number of Episcopal churches finding ways to connect their congregations and communities through the visual arts. Besides providing exhibit space, churches are incorporating visual arts into worship services, hosting workshops and providing space for artists-in-residence.

“The whole parish was involved,” she said. “After Sunday liturgy, we’d be there, initially throwing things out the window into the big dumpster.” The next week, they’d bring in wall paneling. Then followed the painting.

“Everyone in the parish takes such ownership of it,” she said. The final result “is a genuine, sacred space that is beautiful and presents the art in the most wonderful way. It takes my breath away. When I take people over … and we walk in, there’s always a gasp.”

“We’ve spent a lot of money getting this gallery ready, but we see this as long-term outreach,” LaStella said.

The exhibits focus on spiritual but not exclusively Christian subjects or artists. “It’s dealing with the spiritual and the human person,” she said. For the opening exhibit, “we invited artists of every spiritual persuasion to show work that spoke about their connection with God. We had work from all over the country. We had artists fly in from [Los Angeles].”

Another exhibit explored the spirituality of the mandala – round images – and included works from Germany, Italy and England. The exhibit coincided with the Hindu festival of Diwali, and one artist created a large rangoli in the center of the gallery floor. These images traditionally are constructed of flower petals and sand, LaStella said. They used just flower petals, provided by a local florist who plucked the petals off flowers and separated them by color.

The gallery also offers community programming. During the mandala exhibit, more than 100 people attended a workshop led by a female Sufi whirling dervish. During an icon exhibit, the church hosted a roundtable discussion with the artists – including one attending via Skype from Rochester, New York.

A current immigration-related exhibit provides an opportunity for people to share their immigration stories to be archived in the gallery. During worship services while this exhibit is displayed, the congregation is including prayers about current immigration issues. “The prayers have really been beautiful and powerful, and they link us liturgically to what’s hanging there [in the gallery],” LaStella said.

At Christ Church Cathedral in Eau Claire, Wisconsin, the visual arts have been incorporated into jazz vesper services featuring local musicians during Lent. In 2012, the cathedral launched an artist-in-residence program, offering free studio space for a year to two artists. The artists have the opportunity to exhibit their work at the cathedral, and they lead an arts presentation for the cathedral community and one for the larger community plus create a work of art to be donated to the cathedral.

Visual artist Hope Greene, helped launch the artist-in-residence program after joining the cathedral, where her husband, Michael, is dean.

“I try to set up opportunities for other artists to have a place to show or to have space to work,” she said. The cathedral is “much richer in space than they are in money, so they tend to try to use the space that they have as a gift of service to the community.”

“They had a huge basement space that they weren’t using,” she said. “I saw it and I said, ‘Oh, that would be such a great place for artists.’”

The cathedral now is hosting its second pair of resident artists: a metalsmith and jewelry designer, and a sculptor.

As at St. Luke’s, no particular religious doctrine is required.

“We would be much more likely to select someone who was actively and doggedly pursuing truth in their work rather than someone who was specifically a Christian artist because that makes for much more interesting conversations,” she said.

“When they make their presentations to the cathedral, they talk about the impetus behind making their work,” Greene said. “And if it’s a religious artist, then they might … talk about the Christian themes in their work, they might talk about how they find themselves inspired and how they lose themselves in work. And it’s in the sort of conversation back and forth during those presentations … where the people from the cathedral have talked about different ways that art impacts them in their worship.”

The program is building ties between the congregation and wider community, she said. “A lot more of the artists in the town know about the place and are more comfortable coming … and it’s taking the cathedral people out to art venues as well.”

At Philadelphia Episcopal Cathedral in the Diocese of Pennsylvania, visitors often enter to see the artwork hung inside. 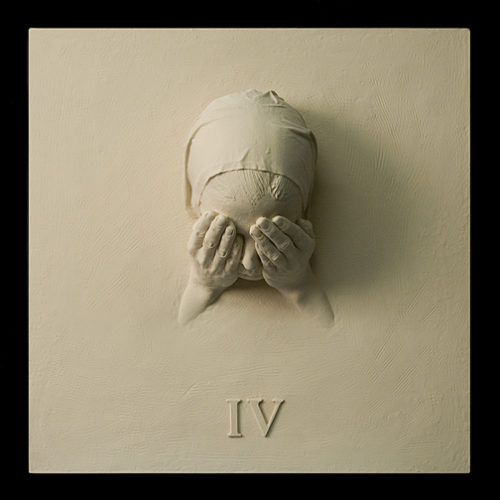 Stations of the cross created by Philadelphia artist Virginia Maksymowicz are displayed this Lent at Philadelphia Episcopal Cathedral as part of its visual arts program. The stations were commissioned by St. Thomas Episcopal Church in Lancaster, Pennsylvania, and completed in the spring of 2005.

“We try to have a different exhibit up for each liturgical season of the year,” said the Rev. Robert Tate, priest associate and director of the cathedral visual arts program. “It’s right there in the nave, so it becomes part of the worship space.

“Then we’ve got a permanent collection that we rotate pieces in and out of the cathedral,” he said. Some of the pieces were donated, others bought by the cathedral. The cathedral also has hosted artists-in-residence who donated works, including a sculpture over the font and a painting and tryptic over the west door.

“We had a wonderful sculpture exhibit at the cathedral of an artist who has done about 30 studies of Jacob wrestling with the angel in all sorts of media: in metal, in porcelain, in wood,” Tate recalled. Joseph Brenman’s “pièce de résistance” was a six-foot-tall wooden frieze of the angel holding Jacob over his head. “At the end of the show, I timidly asked him if he would be willing to loan it to us.” The artist replied that “he would so much rather show it to people in his cathedral than in his basement. It’s been there [in the cathedral] for almost three years, and people love it.”

“It need not be explicitly religious, and it certainly need not be representational,” Tate said. “We’ve had many shows of abstract art.”

The Episcopal Church also engages the wider community through Episcopal Church and Visual Arts, which started in 2000 “to encourage artists and organizations to engage the visual arts in the spiritual life of the church,” according to its website.

On March 14, ECVA launched a Women at Prayer online exhibit in conjunction with a conference called Anglican Women at Prayer: Weaving our Bonds of Affection. The images also were scheduled to be displayed on a screen at the three-day conference, co-sponsored by the Society of the Companions of the Holy Cross and the Center for Anglican Communion Studies at Virginia Theological Seminary in Alexandria, Virginia, said Tate, ECVA board president. Previously, slideshows of ECVA artwork also have been displayed at General Conventions during worship.

“The life of the organization right now is split between the art blog on Episcopal Café … and the virtual exhibits on the website,” Tate said. He himself is a photographer; one of his images was included in ECVA’s first all-photography show during Advent.

“We’ve got hundreds of artists, not all Episcopalians, over the country and increasingly beyond the United States who will submit digital images to the website when the call goes out around a specific theme or by a specific curator,” he said.

Back in Wisconsin, Greene exhibited some of her photography during one of the vespers services.

“Whether they look like it or not, most of the pieces I make are very much about my response to God in the world,” she commented. “The best is when I stand back from a piece that I’ve made and finished, and I look at it and suddenly it becomes clear what it’s actually about. It’s like a gift, that I was led down an idea to a place where there was truth waiting for me. And it’s kind of a new thing to me to be able to now take this gift that was given to me of this insight, this beautiful thing, and to bring it to the Christian community that I’m part of and to be able to see their responses.

“Because art is a communication. … I show work a lot, and people say, ‘Oh, that’s quite beautiful.’ But to be able to take it to the congregation and to have them say, ‘Oh, my goodness, that makes the gospel of today entirely new to me,’” – that, she said, brings “a whole new dimension.”