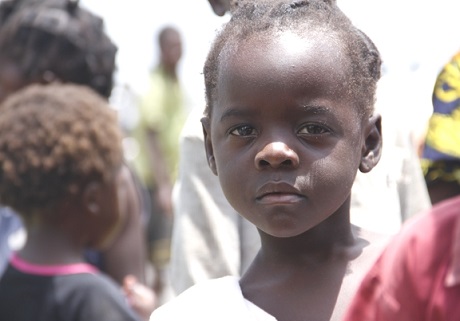 A Zambia program, involving more than 8,000 children under five years and their caregivers, tries to address the multiple deprivations in terms of health, nutrition and protection. Photo: Bellah Zulu/ACNS

The launch was held in one of Zambia’s rural constituencies called Msanzala in the Anglican Diocese of Eastern Zambia. In attendance were government officials and all bishops from Zambia, including the Archbishop of the Church of the Province of Central Africa, the Most Rev. Albert Chama. Others attendees included the local area traditional chief and representatives from UNICEF.

“The Anglican Church does not just end by preaching the good news at the pulpit,” Chama told the more than 1000 people at the event. “We’re here also to touch the people’s lives and hence our desire to collaborate with the state and other partners to improve the people’s lives.”

The archbishop was hopeful that the program would not only be limited to one area but spread to other parts of the country. He also expressed his wish for an education that will not only make children excel in academia alone, but also make them responsive members of our communities.

The government of the Republic of Zambia was represented by Dr. John Phiri, the minister of education, science, vocational training and early education. He was accompanied by his Deputy Minister Patrick Ngoma as well as the area Member of Parliament Col. Joseph Lungu who is also Deputy Minister of Defense.

“I thank the Zambia Anglican Council for inviting me to launch this program because it is an opportunity for me to see the germination and growth of early childhood education especially in the rural areas of this country,” said the education minister.

He added: “Early childhood education is part of our mandate as a government but a lot of collaboration is needed in order for us to effectively implement the program.”

Grace Mazala Phiri is the national programmes director for the Zambia Anglican Council. She explained that the main purpose of the programs is to help the children reach all the developmental milestones as well as to support their parents or caregivers.

“We’re focusing on children who are 0-6 years so that their health is good and minds stimulated to learn. Most African parents have little or no time to play with their children,” she said.

She added: “We have decided to scale up this program because of the progress that we made in similar programs in the past. We have been able to partner with many other organizations such as UNICEF and have been able to increase the early childhood centers to 53 in this area.”

A typical early childhood education center would have a sizable play park with swings and slides for children and would often offer food supplements to the children who usually come from impoverished and disadvantaged homes.

One of the UNICEF-Zambia representatives Given Daka said that children who have had early childhood education usually have a head start in primary education. “Investment in ECD is in essence an investment in Zambia’s future,” she said.

“ECD is a priority for UNICEF world over and well as in Zambia and we have been providing financial and technical support to the Ministry of Education in Zambia.”

The Zambia Anglican Council (ZAC) in partnership with Episcopal Relief & Development in the USA established this community-based, volunteer-driven Early Childhood Development Program which started in three provinces of copperbelt, central and north western.

The program, involving more than 8,000 children under five years and their caregivers, tries to address the multiple deprivations in terms of health, nutrition, protection, and early stimulation, which combine to effect their cognitive, language, social-emotional and physical development during the critical formative period.