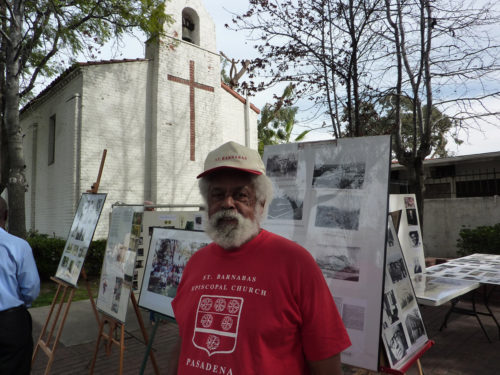 Along the parade route, the 24-year-old Pasadena resident was drawn in by an eight-panel photographic retrospective spanning nine decades of the life of St. Barnabas Episcopal Church located on the historically black congregation’s front lawn.

“I feel honored to be exposed to the legacy of their contributions to the community, spiritual and otherwise,” said Bracy, of the display. “I’d like to see more people my age here, embracing the history that has kept hope alive for so long, and embracing the church and the community.”

(St. Barnabas is the second church to be featured in a Black History Month Episcopal News Service series in February focusing on historically black congregations. The historically black congregations were founded by African Americans who were not welcome in mainline Episcopal churches post-slavery and during racial segregation in the United States.)

“I’m here to answer questions, to invite people to come and take a look, to give them information,” said Mims, who calculates that he has attended the church since he was three years old.

The “Early Years” panel included photos of his aunt, Rosebud Mims, who along with seven other African-American women founded the church in 1923. Nine years later, it was officially recognized as a mission in the Diocese of Los Angeles. 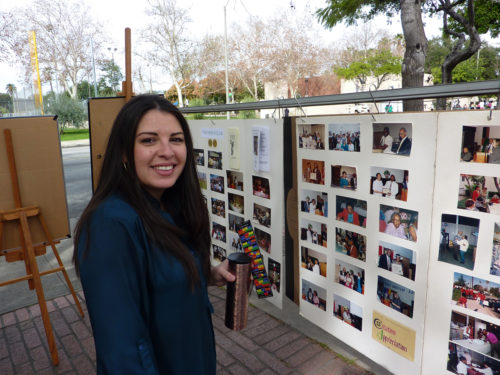 For the Rev. Mayra Macedo-Nolan and her two-year-old daughter Zion, the photos were captivating.

“I’ve learned a little bit about the history of St. Barnabas, and I want to learn more,” said Macedo-Nolan, a pastor at nearby Lake Avenue Church in Pasadena.

“We’re going to be doing a community stations of the cross during Lent, and we want St. Barnabas to be included as the station where Christ is denied,” she said. “We chose to do that one here because of the way St. Barnabas started — the way things were done in the past was denying Christ – and also to look at the ways we still do that today.”

Church history, family history
Mims said he reached into his family archives to create the photographic display of the church’s history.

“I have pictures of my great-aunt, who was responsible for taking me to St. Barnabas in 1941,” Mims said. She was Laura Kennedy, who moved to Pasadena in the 1930s from Greenville, South Carolina to help Mims’ mother raise six children.

The photographs tell the story: of the first meetings, in the home of Georgia Weatherton on nearby Del Mar Street, where some 30 worshippers attended on Sunday mornings; of the 1933 dedication of the sanctuary; a 1947 confirmation service; the groundbreaking and 1972 dedication of the new parish hall envisioned as a community center; and of scores of gatherings, fundraisers, barbecues and celebrations. 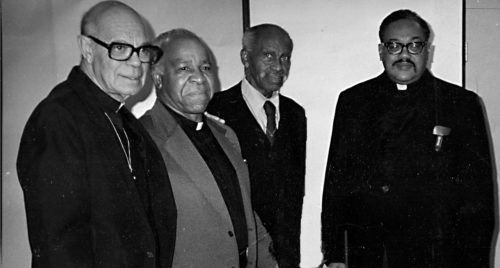 Also included, a snapshot of the church’s and the country’s history, the first vicar the Rev. Alfred Wilkins (1933-1943), who heeded “the call of his country, joining the U.S. Army as a chaplain,” according to a written history.

Ottley challenged the congregation “to find its true vocation as black Episcopalians” and to commit to an ethic of stewardship, authenticity, education, leadership, ecumenical fellowship, social justice and outreach, “embracing the community beyond the walls of the church,” according to Mims.

The fruits of those efforts are apparent today, as members gathered curbside in front of the church on Feb. 15, applauding and cheering parade passersby, more than a dozen local school marching bands, African dancers and drummers, the Omega Psi Phi and Kappa Alpha Psi fraternities and Delta Sigma Theta and Alpha Kappa Alpha sororities, equestrians and other service organizations.

They received accolades and shouts out of their own from parade participants like Pasadena City Councilman John Kennedy.

“Yeah, St. Barnabas is in the house,” Kennedy called out, waving to parishioners as he passed the church, nearing the last leg of the parade route. “Thank you for being here, St. Barnabas.”

‘Embracing the community’
At least a part of that vocation has been a tradition of community involvement, according to the Rev. John Goldingay, a Fuller Theological Seminary Professor of Old Testament, who now serves as priest-in-charge.

“We’re only a tiny congregation,” but he and about a dozen church members regularly take part in cooking for, serving and eating with members of the homeless community at the Union Station Shelter in Pasadena, he said.

Together, they serve about 50 homeless adults every third Friday and it is an opportunity to enrich the lives of others as well as that of the congregation, he said.

“It is kind of a transitional place for people who are on their way toward being able to get back to work,” according to Goldingay, a Church of England priest for 30 years. He moved to Pasadena to teach and with his wife visited the nearby church of St. Barnabas “not knowing we’d find ourselves the only white people there,” he recalled.

“But we got this fantastic welcome, so much so that we stayed,” he said. “They seem to accept me as a human being, and as a priest, and a Christian.”

Radical welcome, belonging
That kind of radical hospitality is one way the church has attempted to navigate the contemporary challenges of shifting demographics, aging population, dwindling membership and resources.

With an average Sunday attendance of about 50 between two services, the congregation is weighing “how we can reverse that trend,” Goldingay said.

Over the years the congregation’s traditional African-American population increasingly has broadened to include members from across the diaspora, including the Caribbean and Central America, and also whites like himself, Goldingay said.

Mark Bradshaw, 32, a seminarian serving at St. Barnabas, agreed. “I am not black,” he said during a telephone interview with ENS, but added that he and his wife Katie were so warmly welcomed when they visited the church that “we became Episcopalians. We were confirmed at St. Barnabas and it has become everything my wife and I had been hoping and praying for in a congregation.”

He and the congregation have embarked upon several projects, he added. “I’m in the process of meeting people, updating the website, spending time during the week at the Jackie Robinson Park across the street,” he said.

“And I’ve been meeting with people in the congregation and we’re thinking about starting a new service or altering one of our services that would be very true to who we are and very liturgical but that might also be a service that would better meet the needs of younger persons,” he said.

He hopes that other newcomers can experience the same sense of belonging he has found. “I have never been a part of people so welcoming,” he said.

“Two years ago, Fr. John asked the congregation to share some of their stories from the civil rights movement and it was incredible,” he recalled. “Almost everybody had marched with Dr. King or had met him. The congregation takes a lot of pride in their history.”

Which made preaching about the life of the Rev. Martin Luther King Jr. feel a bit overwhelming, but it was an opportunity “to talk about how far we’ve come and the work of Dr. King, and to thank the congregation for how they welcomed us,” he said.

“It’s amazing,” he added. “This congregation that started because they weren’t welcome has become so welcoming. I’ve never witnessed before the kind of warmth with which they welcome new people into their midst. It’s a wonderful gift.” 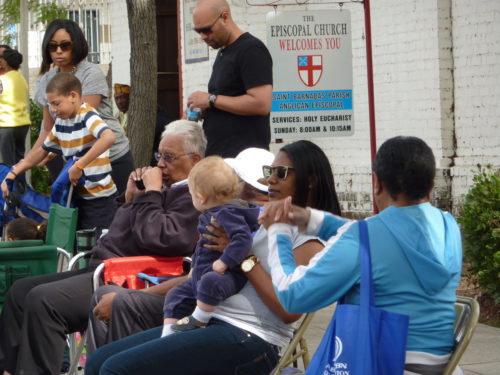 St. Barnabas members gather in front of the church to cheer on the parade. Photo: Keith Yamamoto

Looking forward to the next generation
Showna Edwards, 31, seated in a folding chair in front of the church, had a bird’s eye view of the parade, and was patiently awaiting sight of the church’s parade entry –including several young people, along with Bradshaw bearing the St. Barnabas banner.

“It’s an exciting feeling to know the church is participating in the parade, to have our church known in this small part of Pasadena,” said Edwards, as she bounced one-year-old August Bradshaw on her knee.

“We’re a close-knit church family. I grew up here,” added Edwards, who sees signs of the church rebounding. Now, her three-year-old son Kaden is part of the Sunday programs.

“We have a Sunday school again. Young people are here. The church is growing. It’s very nice to see that, because it’s good support, to grow up with friends together in a church home.” 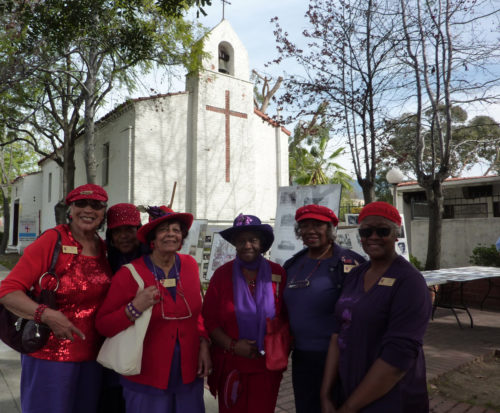 Gail McKinnon and Gloria Huffman, long-time members, brought along some of their Red Hat Society Nubian Roses of the Nile chapter sisters – an international society of women who wear red hats and purple dresses and are dedicated to reshaping the way women are viewed in society.

“St. Barnabas is a family,” agreed McKinnon. “I’ve been here since 1995. I had been away from church for many years and I was welcomed back so whole-heartedly that it became my home. We love each other. We do a lot of eating. I joined and I’ve never looked back.”

The church, located across the street from the park named after baseball great Jackie Robinson, a native son, where the crowd had already begun to gather for food, fun and festival, the church also held an open house for the community.

For Pasadena residents John and Tina (who asked that their last names be withheld), the day was an opportunity to make historic and future connections for their five-year-old twins Phoebe and Perry. 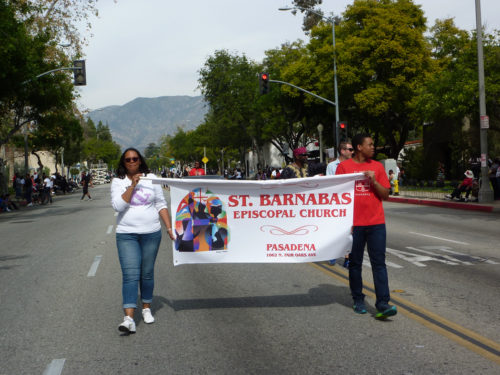 They visited Mims’ photographic retrospective and then pointed out the church’s parade entry, as Karla Enrequez and her son Matthew, along with Mark Bradshaw, bearing the St. Barnabas banner, waved to the crowds.

“This is so informative,” Tina, a professional singer, said as cheers and applause erupted for St. Barnabas.

“This is a whole historical perspective of the African-American past in Pasadena … This is a thriving community,” added Tina, who said she’d be back to visit the church.

Goldingay agreed, noting a growing interest among numerous parade watchers who visited inside the church. “Next year, we want to see how we can develop what we did this year,” he said.

As for Michael Mims, he spent much of the day telling family and church stories, stories of his aunt and about the many others who set the standard for keeping faith and hope alive in Pasadena and for moving the tradition forward for future generations.

“It’s been a good foundation,” he said of the church. “From a spiritual aspect, a community aspect, a family aspect, it’s been such a big part of my life. I don’t know what I’d be without St. Barnabas. I had a lot of mentors.”