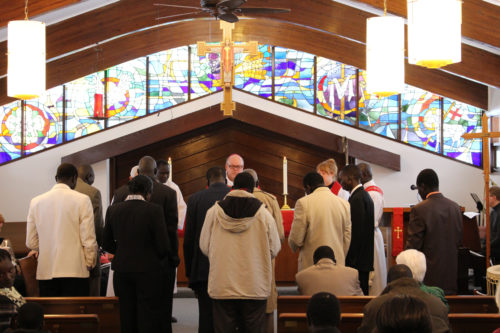 Kentucky Bishop Terry White offers prayers of healing for family members of those who have died in the recent fighting in South Sudan. Photo: Brian Funk-Kinnaman, Diocese of Kentucky staff

[Episcopal Diocese of Kentucky] Calling for prayers for the dead, and those grieving, orphaned, wounded, and displaced due to the recent escalation of violence in South Sudan, Episcopal Bishop Terry White led the Diocese of Kentucky in a Day of Prayer on Sunday, Feb. 16 at Messiah-Trinity Church in Louisville. A Eucharist commemorating the Martyrs of Sudan was followed by a time of fellowship and story-sharing.

The blended Episcopal-Lutheran parish is also a joint Anglo-Sudanese congregation. Louisville’s significant Sudanese population has grown out of more than 200 “Lost Boys” who arrived in Kentucky in 2001 after fleeing war in the Sudan. Many of the young refugees were assisted in their resettlement by Kentucky Refugee Ministries, an affiliate partner of Episcopal Migration Ministries. 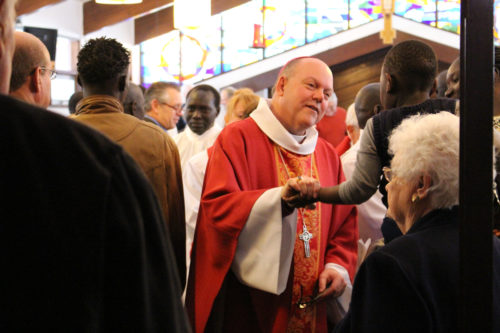 Bishop Terry White greets a young parishioner during the exchange of the peace. Photo: Brian Funk-Kinnaman, Diocese of Kentucky staff

White called the diocese to the Day of Prayer as a show of solidarity and support for its Sudanese members after hearing “sad and sobering” reports from Deacon Daniel Kuol, who serves at Messiah-Trinity. Kuol and his wife, Deborah, have lost seven family members in the fighting in and around Bor, the birthplace of many of Louisville’s Sudanese population. In sharing the news of his family’s losses, Kuol called the community to act for peace and unity, saying, “We are Christians. We do not take sides. We must be peacemakers between those who are fighting.”

Kuol and a group of drummers led the congregation in a Dinka song recounting the journey of the “Lost Boys.” A candle lighting ceremony followed, during which church members read aloud the names of more than 40 relatives who have died in the fighting. Representatives from the families gathered around the bishop and received prayers for healing and hope. Representatives of other parishes in the diocese were present in person or through messages and gifts, as were ecumenical representatives of other Sudanese communities, including nearby Presbyterian and Missouri Synod Lutheran congregations.

In a statement released Feb. 4, Episcopal Church Presiding Bishop Katharine Jefferts Schori encouraged Episcopalians to pray, and to help spread awareness of needs of those in South Sudan, writing, “The Prince of Peace serves the whole world.  As his disciples, may we do no less!”

Scripture readings were available in English and Dinka, and the sermon was translated into Arabic as well. White enjoined those gathered to work for a solution, saying, “We must all be peacemakers! Courageous reconcilers! We must all be filled with the unconditional love of God for all people, including our enemies.” After the sermon, the bishop invited the congregation to renew their baptismal covenant, calling on the community to “stay faithful to Jesus who died and rose again and who has destroyed death forever.” 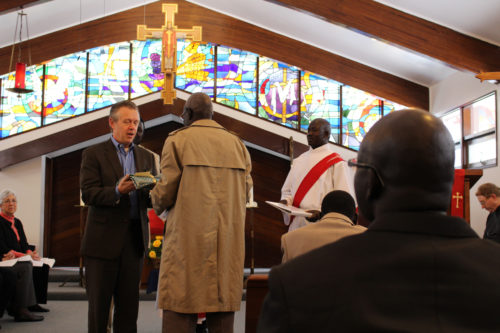 The congregation processed out of worship to the traditional Easter hymn “Lift High the Cross” and gathered for a shared meal of traditional Sudanese and American potluck dishes, including ham sandwiches and Khoodra Mafrooka, a spinach stew.

The meal was followed by a time of story-telling, during which a panel of local Sudanese leaders shared their hopes for a united, peaceful life for the people of South Sudan. “We come from a great nation, and we must be united to one another,” said Alier Mareet, one of the seven speakers. The group thanked their “fellow Americans” for the support they have shown by welcoming the stranger and by participating in relief efforts intended to alleviate the suffering of the South Sudanese. John Deng, pastor of United Sudanese Lutheran Church (Missouri Synod) urged those gathered to call on American political leaders to use their influence to work for an end to the violence, saying,  “We need the world to put pressure on the leaders of South Sudan to stop this terrible war.”

Bishop White’s sermon can be read here, and his Call to a Day of Prayer for South Sudan is here.