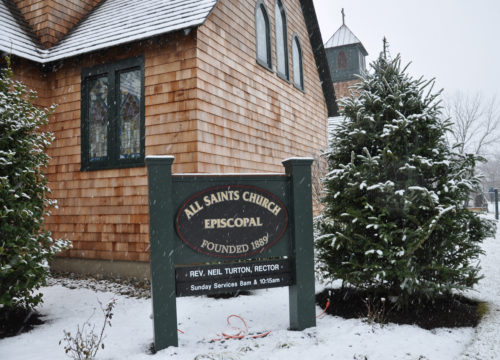 The members of All Saints Episcopal Church in Bay Head, New Jersey, will be back home in their church on Dec. 21 for the first time since Hurricane Sandy severely damaged the building and grounds on Oct. 29, 2012. Parishioners strung lights on the pine tree to the right of the sign and hosted “A Festival of Light” the evening of Nov. 30 as a sign to the community that they would soon return. Photo: Mary Frances Schjonberg, Episcopal News Service

[Episcopal News Service] After more than a year in exile, the members of All Saints’ Episcopal Church in Bay Head, New Jersey, will be home for Christmas.

In fact, the parishioners of the church that Hurricane Sandy swamped on Oct. 29, 2012, will be home for the Fourth Sunday of Advent.

All Saints’ doors will open again on Dec. 21 with a “Service of Light.” The following day, the parish will celebrate its first Sunday Eucharist in the church since Sandy. Diocese of New Jersey Bishop William Stokes will re-consecrate the sanctuary and church’s memorial garden.

It will be a “very, very emotional” two days, the Rev. Neil Turton, All Saints rector, predicted.

“But, as I’ve been warning them in a number of sermons I’ve recently delivered, we are not going back in the way that we were when we left,” he told Episcopal News Service in a recent interview. “It is going to be very different. Do not expect to be what we were because of the circumstances that have changed and shaped us over these last 15 months.”

The 124-year-old church sits three blocks from the ocean and just feet from Scow Ditch, a tidal waterway. Sandy caused close to $4 million in damage to the church and rectory as it drove water toward the church from both the Atlantic and Barnegat Bay. And All Saints is surrounded by still-devastated homes along a stretch of the Jersey Shore where some blocks are still mostly deserted and where, on other stretches, builders toil to restore the communities from Sandy’s body blows.

“It’s renewal,” said Mark Durham, who lives a few yards south of the church, of All Saints imminent return. He and his family have been back in their house since January, but it’s been a lonely year as few of their neighbors have returned. 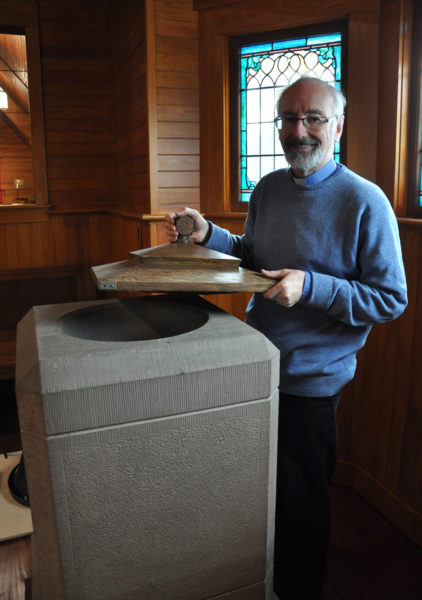 The Rev. Neil Turton, rector of All Saints Episcopal Church in Bay Head, New Jersey, stands near the church’s original baptismal font, which, because it is anchored into the ground below the building, helped hold the entire structure in place during Hurricane Sandy. Photo: Mary Frances Schjonberg, Episcopal News Service

Bay Head and neighboring Mantoloking to the south sit together on a narrow strip of land between Barnegat Bay and the Atlantic Ocean. They were two of the area towns among the hardest hit by Sandy. A 130-year-old rock seawall is thought to have made the difference between homes being inundated in Bay Head and ripped apart in Mantoloking.

Eighty-eight percent of Bay Head’s oceanfront homes were flooded but only one was destroyed, one report said. In Mantoloking the ocean breached the barrier spit in three places, destroyed 60 homes, making 137 uninhabitable and damaging another 383.

The magnitude of damage has “left a deep scar and we will also be shaped by that,” Turton said, adding that there are psychological scars as well.

There is “a great deal of frustration, anger because after 15 months a lot of people are still suffering,” he said. “It’s as though time has moved on but it seems time has stood still in terms of insurance companies, government” and the way those entities’ policies and procedures has at times hampered the Shore’s restoration.

But, Turton said, “the faith community has remained incredibly strong.”

That strength comes despite the fact that the congregation is smaller than it was before Sandy struck. Some people have still not come home to the Jersey Shore. Some snowbirds never came back from Florida this past spring. “A lot of people have walked away,” he said, noting a trend happening up and down the Jersey Shore and elsewhere in Sandy’s wake.

Turton said the parish’s pre-Sandy average Sunday attendance was 168; since Sandy the figure is “a shade under 100.” All Saints congregation has spent these long months worshipping at 12:15 p.m. on Sundays at St. Mary’s by the Sea Episcopal Church in Point Pleasant Beach, about two miles to the north. St. Mary’s also offered refuge in the form or meals and other supplies to hundreds of storm victims beginning the morning after Sandy cleared out.

“It’s given us a very hands-on concept of what it means to be part of a diocesan family in a way we would never normally understand,” Turton said of the parish’s time at St. Mary’s. “It’s different from going to a diocesan meeting with people. We have actually lived and breathed with these people, shared worship, shared meals, shared stories.” 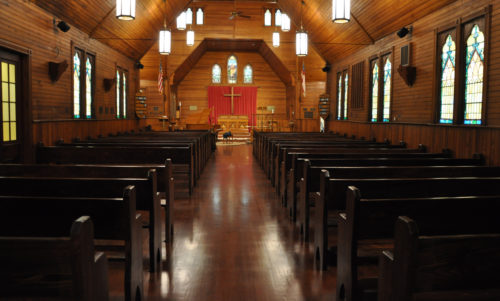 Still, it wasn’t home. And the 12:15 p.m. worship time was a tough sell for some folks, especially young, busy families. “It’s no disrespect to St. Mary’s,” Turton said. “They have been wonderful but, we have been in exile. We have been in a foreign land.”

Often, when he has been asked to introduce himself at meeting over these months, the rector responds: “My name is Neil Turton and I am from All Saints in Exile”

And now that exile is about to end. Parts of the office area, primarily Turton’s office, still need finishing but the church itself was nearly put back to rights when ENS visited Dec. 10. The restored organ was due back any day and the pulpit’s placement awaited arrival of the sound system. The pews still need book racks and cushions.

Those were some of the last items on what has been a long punch list of needed work that began soon after Sandy’s waters – waist-high or higher by the looks of the debris lines it left – receded. Not all of the damage was apparent at first, said John Tym, a local builder who completed five years of restoration work on the church days before Sandy struck.

As Tym and a colleague walked through Bay Head after the storm to check on their customers’ properties, their first reaction was relief when they saw the church still standing at the corner of Lake Avenue and Howe Street. A few days later they entered the church and sensed a six-inch pitch to the floor as they walked up the aisle. Then they noticed that the walls of the sanctuary were pulling in as they walked. 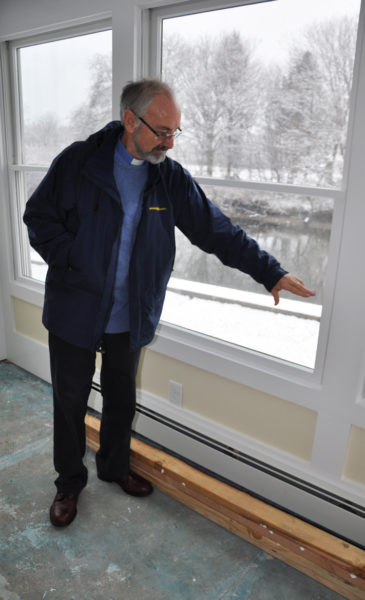 The Rev. Neil Turton, rector of All Saints Episcopal Church in Bay Head, New Jersey, shows how high Hurricane Sandy’s storm surge rose in his office at the back of the church. Water from tidal Scow Ditch, just feet from the windows, scoured a huge hole under the church and inundated the office area and parish hall. Photo: Mary Frances Schjonberg, Episcopal News Service

The cause was a water-filled eight-10-foot wide hole under the floor. The storm surge had scoured out nearly eight feet of the ground around the church’s red-brick pilings. The underside of the floor had never been attached to those pilings, thus, had it not been for the more modern foundations under the attached Bristol Hall on one side and the 1950s-era narthex on the other, the church would have been washed away, Tym said.

And if a preacher ever needed a homecoming sermon illustration here it is: the other anchor that probably saved the church was the baptismal font in the narthex whose concrete base goes through the floor and into the ground.

The parish’s Facebook page has a photo gallery showing the immediate post-Sandy state of the church building and the rectory, and the initial clean-up, here.

With the help of Church Insurance, whose concern and work Turton called “brilliant,” a disaster-restoration company came to the church within days of the storm to dry the inside of the building while work began on repairing and raising the Scow Ditch bulkhead by two feet. That latter project was being funded by $50,000 in insurance money and a parishioner’s gift of stock that would add another $30,000, according to Turton.

Then, thousands of gallons of water had to be pumped from underneath the church. Tym oversaw the sinking of close to 100 helical piles into the ground below the building to retrofit the rudimentary foundation. The church has since been tied to those piles. Sump pumps are in place as well.

The church floor had to be ripped up and the floor beams replaced. All utilities needed to be replaced. The office area and the interior of the parish hall and its kitchen needed to be gutted and redone.

The entire exterior had been re-shingled over the previous five years or so and Tym had just decided to take down the last of the exterior pipe scaffolding right before the storm. Then he was faced with the choice of pulling the interior walls apart to get at wet insulation or tearing off those new cedar shake shingles. Tym had to leave when the shingles were stripped from the building because he said he just couldn’t watch. 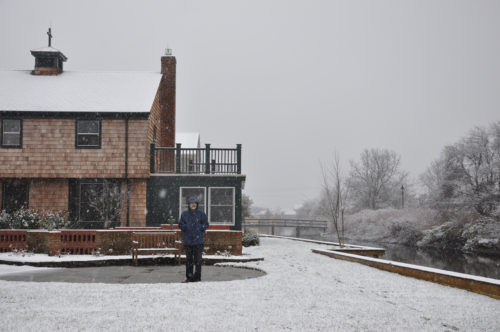 Water from tidal Scow Ditch, which runs along the back of All Saints Episcopal Church in Bay Head, New Jersey, did the most damage to the 124-year-old property, including wreaking havoc in the memorial garden. Photo: Mary Frances Schjonberg, Episcopal News Service

Colin Walsh, whose company C.M. Walsh Pipe Organs of Philadelphia was restoring the water-damaged organ, told Tym that they could help him with other cabinetry needs. When it became clear that the majority of the pews, which were all original to the building, could not be salvaged, Tym asked Walsh to make new pews. The only trouble, he said, was that the first prototype “looked too nice” and Tym feared the pews would look out of place in the restored nave. Walsh worked with Tym to get the stain to look old enough, according to the builder.

Wood from the original pews was later milled into wainscoting for the parish hall and office wing. And other salvaged lumber was crafted into an altar for the hall for more informal services. Tym said they added LED light bulbs and other energy-efficiency upgrade.

“We’ve got a 21st century church in a 19th century context,” Turton said. 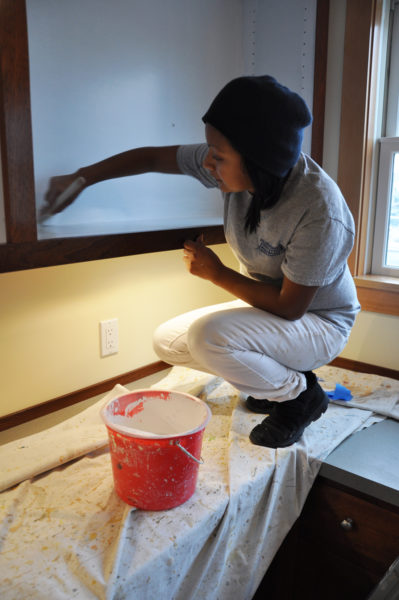 Church Insurance covered all but $200,000 of the work on the church, according to the rector and Tym, and the parish has raised about $70,000 of that amount thus far. The insurance settlement came after some negotiation but Turton insisted, “I can’t praise them too highly” for the way the company worked with them.

Sandy also flooded the near-by rectory to the point where it needed to be razed. Construction began earlier this month on a new rectory, with Church Insurance covering the $500,000 replacement cost. However, Turton and his wife, Wendy, will not be living in the new rectory. The couple has moved four times since being displaced by Sandy and can’t face a fifth move, he said.

While “one or two people” questioned the need to construct a rectory in that case, Turton said the parish must build for the future. “No one appointed here [as the next rector] will be able to afford a house in Bay Head,” he said.

Meanwhile, assuming the rectory is completed by next summer, the parish can let it out in the lucrative summer-rental market for “a princely sum,” he predicted.

But, for now, summer is far way and winter is just coming on. The Dec. 21 Service of Light celebrating All Saints’ long-expected homecoming will begin just about six hours after the winter solstice. As parishioners and friends head into the longest night of the year, they will no doubt be remembering that other long night – the one when Sandy hit the Shore.