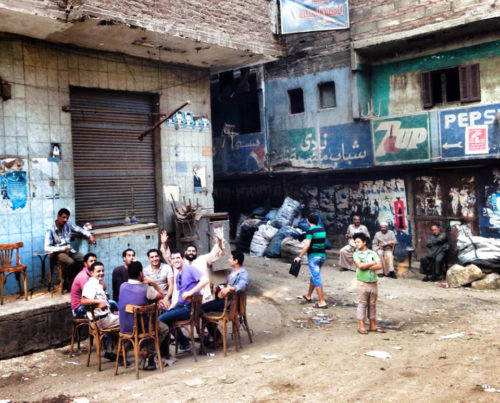 Gavin Rogers shares drinks with residents from “Garbage City,” or the Zabaleen community. His guide, Wael Fahim, is seated on the far left, wearing a white shirt. Photo: Matthew Aragones

[Episcopal News Service] Hearing about unrest in a country doesn’t generally inspire people to travel there. But when he learned that dozens of Christian churches were being torched after protests began surrounding the ouster of President Mohamed Morsi in Egypt, the Rev. Gavin Roger’s response was: “I’ve got to go.”

Rogers, a Church of Christ minister and the minister for missions, youth and young families at St. Peter’s Episcopal Church in Kerrville, Texas, recently completed two trips to Egypt to meet with the affected Christian community and see for himself what was happening. They were visits with a purpose, yet without an itinerary.

“People say, ‘What are you going to do?’” while you’re there, Rogers said. “Well, really nothing. All we do is share solidarity. We just remind each other, ‘You’re not alone.’”

Rogers traveled to Egypt Sept. 15-20 and again Oct. 2-15. But, in a way, the journey really started when he took a pilgrimage to Egypt in 2006 after studying Alexandrian Christianity as an M.Div. student at Duke Divinity School in Durham, North Carolina. He learned about some of the “radical things” monks in desert monasteries did to observe Lent, such as entering a cave, putting a rock in one’s mouth and maintaining silence. Returning home, for years he had in the back of his mind the question: What could he do in Lent that would really “stretch” him?

He graduated from Duke. Got a job as a youth and missions leader at a Baptist church in San Antonio, Texas, that ran a downtown community center. And, in 2012, inspiration struck: He would spend a Lent homeless, living like some of the “unhoused neighbors” the center served.

“It was an amazing journey. I got really close with some neighbors,” he said. “All of them come from different life situations.”

He started by sleeping in the city’s outdoor shelter, then in places like abandoned buildings and vans. “I didn’t tell anybody I was a pastor,” said Rogers, who is now in the discernment process in the Episcopal Church. “I was never asked in my 48 days by a homeless person why I was homeless. … I just really lived among them, wanted to be part of it, be treated how they’re treated.”

“I learned that we all have a common humanity and that really the reason sometimes we don’t acknowledge the homeless or our unhoused neighbors is because we’re afraid to be vulnerable,” he said.

During his unhoused days, he met the Rev. Lorenza Andrade Smith, a United Methodist minister spending a three-year appointment living “under the stars” as a homeless person. “She has no money, she has no agenda. … Every day, she just does what they do, and she cares for them, and they care for her. It’s not a one-sided thing, like so many of our mission journeys.”

The two became friends. Then, in August 2013, Rogers was working at Camp Capers in the Episcopal Diocese of West Texas when he saw a CNN report about churches being burned during the outbreak of violence in Egypt. “It hit me for some reason,” he said. “I’d been there.”

“After three minutes reading that article, I called Lorenza … and I said, ‘We’ve got to get to Egypt.’”

A month later, they were on their way. “We landed, and for that week we were at the mercy of people we met, trying to get into the towns and communities that were affected by these tragedies, by these churches being burned down. We wanted to speak to the priests or the sisters or the Coptic ministers who were affected by all this. All we were hearing in the media was how bad it was.”

It took four days for them to convince anyone to drive them to Minya, an area four hours south of Cairo where reportedly the lion’s share of attacks had occurred. Once there, Rogers said, “All I could do was take pictures.”

“For the first two days of our journey, Lorenza and I just met with taxi drivers and local people and just heard their story and their take on everything.” They found a driver named Mohammed who was willing to take them to a Coptic monastery that had escaped attack but not to the site of the burned churches. “He said, ‘Your life and my life and my family’s life is more important than you getting to Minya.’”

During the drive, he talked about life as a Muslim. “To us, he was a very moderate Muslim,” Rogers said. “He seemed very genuine to us and very concerned about his country.” He referred to Christians and Muslims, particularly in Egypt, as close relatives – siblings or cousins.

While we use the word Coptic to mean Christian in Egypt, Rogers said, the word originally simply meant Egyptian. In Egypt, “so many people have a sense of unity and pride between the two faiths,” he said. “That taught me a lot. Even in severe differences that probably are life and death to many people, how can you live with the other or your enemy or your neighbor that you don’t like or you don’t agree with? In Egypt, you get to see the most beautiful side of that, because they do it well sometimes. But you also see the violent side of that decision.”

“That’s one thing I learned: So many people side [with] loving your neighbor,” he said, adding that he’d like to challenge the notion promulgated by media and extremists that such love is impossible. “I’d like to think it is possible. Christ said it was possible.”

At the Wadi Natrun Monastery, they saw this in action, as their driver and one of the monks shared tea together. Watching the two discussing issues of faith, they could see them shaking their heads in agreement, then disagreeing, but “they let it go.”

Muhammed and the monk finished their tea, hugged and posed for photographs together. “What could be accomplished by drinking more tea?” Rogers mused.

Finally, toward the end of their trip, they met Wael Fahim, an out-of-work tour guide. He brought them to Minya, where they photographed some of the damaged buildings. Then Rogers headed home to Texas for a speaking engagement, vowing to return to Egypt when he could. 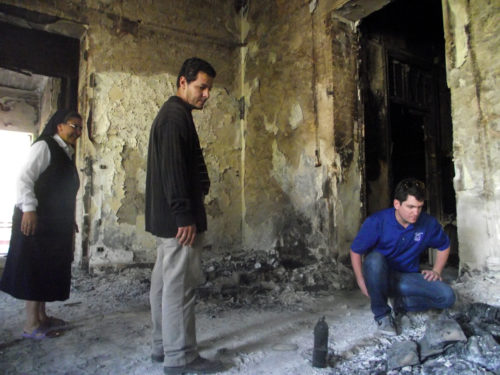 From left, the Mother Superior of Good Shepherd Catholic Church and Convent in Suez, guide Wael Fahim and Gavin Rogers survey the damage after Good Shepherd was attacked and burned during an outbreak of violence in August. Photo: Matthew Aragones

Back to Egypt
The opportunity came sooner than he expected. At the end of his talk, a woman approached him and said, “I’ll sponsor your next trip.”

So Rogers headed back to Egypt for two weeks, this time accompanied by Matthew Aragones, a senior at St. Edwards (Roman Catholic) University in Austin who he had met doing youth ministry. Rogers reconnected with Fahim, who guided them throughout their trip. This time, “we saw everything.” 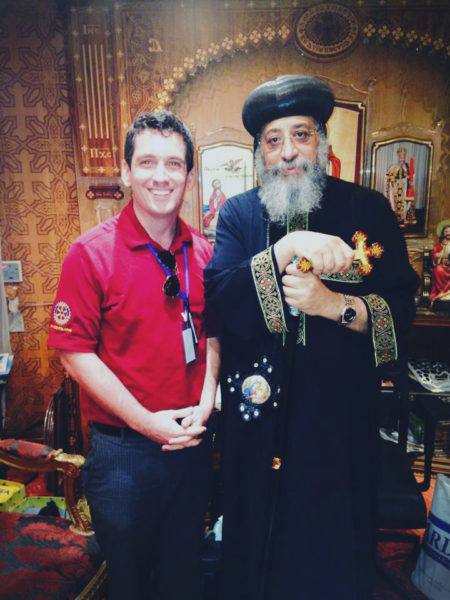 That included a 15-minute meeting with the Coptic pope.

Pope Tawadros II gave them a cross that says in Arabic, “Love never fails.” And he asked for American Christians to continue to pray for him and the church, to not forget what had happened and to love the people around them, Rogers said. “How do you help Egypt? He basically said, ‘Love your neighbor.’”

Rogers and Aragones visited four church communities, talking to monks, priests and nuns whose buildings were attacked. Twice they traveled to Suez, an area hard-hit by Muslim Brotherhood attacks on churches. They toured churches, a convent and a Latin monastery, “all burned and gutted.”

“I got to speak to the [convent’s] sisters that were there that day when it happened … how they had to rescue the kids in their school,” Rogers said. Yet, as he talked with them, it was as though they were leading a tour of a new building, he said. “I was kind of crying, and they were smiling and laughing because they had so much joy.”

The nuns realized that, although their attackers could intimidate them, that didn’t have to dictate their response, he said. “To see that was completely inspiring.” 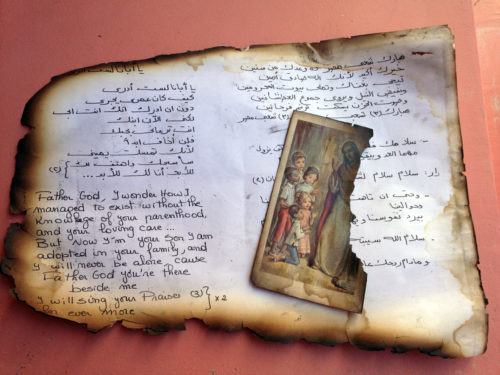 Sections of a prayer book and art from burned churches in Suez. Photo: Gavin Rogers

The nuns gave him some burned prayer book pages and other items as a remembrance. “When I look at them, I don’t see the sorrow. I see hope, I see joy and confidence and how to act through love. It was fascinating.”

In Suez, they also visited the Anglican Church of the Good Shepherd. “It was the only church not burned down,” Rogers said. Although it was attacked, it was the only church without tanks securing it. “That Anglican priest asked the army not to guard it with tanks. The Muslim Brotherhood looked for places with Army support and burned [them].”

In the end, Rogers believes he succeeded in finding stories of hope and love, and of sharing solidarity with Egypt’s Christians. “Like the pope said, love never fails. Sometimes it’s as simple as going there and walking around. We broke bread, they gave us drinks, and we toured their life, and it was amazing how much joy they got out of it.”