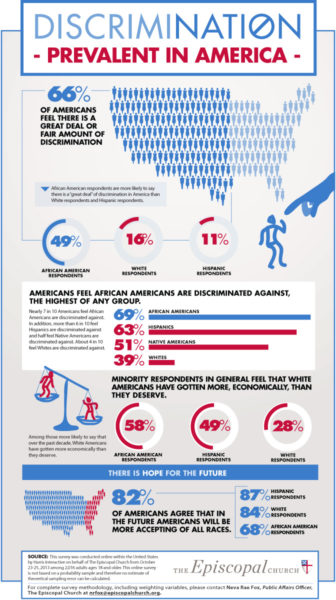 [Episcopal Church Office of Public Affairs press release] A new national poll commissioned by the Episcopal Church has found that nearly all Americans (98 percent) feel that there is at least some discrimination in the United States today.

Harris Interactive conducted the poll online in October among more than 2,000 U.S. adults.

“Despite major reforms, our culture continues to perpetuate discrimination in various forms,” said Episcopal Church Presiding Bishop Katharine Jefferts Schori. “Our churches and communities are critical motivators in encouraging change in these issues toward greater parity and acceptance.”

These findings and others will be explored by a distinguished panel of national experts including Myrlie Evers-Williams, widow of slain civil rights leader Medgar Evers, and former Mississippi Governor William Winter during a public forum on Nov. 15 in Jackson, Mississippi, Fifty Years Later: The State of Racism in America.

The forum will be webcast live from St. Andrew’s Episcopal Cathedral and keynoted by the presiding bishop. Details are available here.

Generally, individual races feel they are discriminated against more than other races. This is particularly pronounced among African-Americans and white respondents:

According to the results, one indication of differences in perceptions among races may be that many do not have close friends of other races. Hispanic (62 percent) and African-American (52 percent) respondents are more likely to strongly agree than white (41 percent) respondents that they can think of three close (non-family) friends of a race other than their own. People who live in the South (74 percent) and West (79 percent) are more likely to agree than those living in the Midwest (64 percent) or Northeast (65 percent) to agree.

“In general, we also found that respondents who are younger and more highly educated are more likely to be accepting of different races, and to be comfortable with diversity,” Jefferts Schori said. “We recognize that youth and young adults, along with the faith community, are key to helping motivate substantive change in our society.”