[Episcopal News Service – Nashville, Tennessee] Back when Regina Mullins was working Dickerson Pike, a Nashville thoroughfare known for prostitutes and drugs, there came a point when she didn’t want to turn another trick or smoke another crack rock.

She’d been in-and-out of prison over a 13-year period and she wanted to go back.

“I’d lost myself. I believed the lie that there was no way out,” said Mullins, during a Thistle Farms National Conference workshop session Oct. 15. “I started to believe the only safe place was prison.”

Mullins was the fifth woman to enter Magdalene. Now clean and sober for 17 years, she is the outreach manager for the two-year residential program for women survivors of prostitution, trafficking, addiction and homelessness started by the Rev. Becca Stevens, the Episcopal chaplain to Vanderbilt University, in 1997. 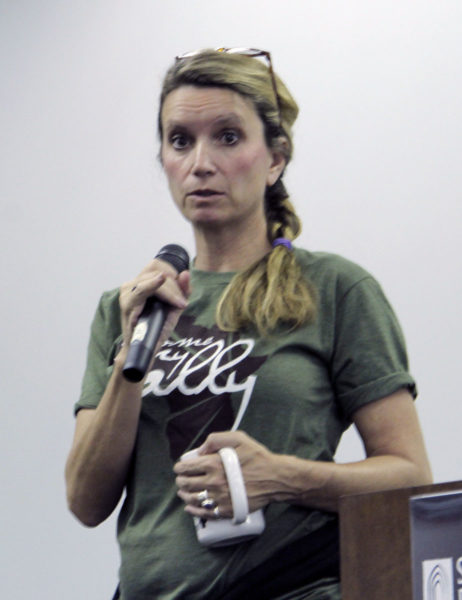 “I don’t want people to think that this is a charity, or just a social enterprise or a recovery model – we really are a movement,” said Stevens in an interview with ENS at St. Augustine’s Episcopal Chapel on the edge of Vanderbilt’s campus. “We are a movement of people with small organizations around the country that are trying to come together to change a culture that still buys and sells women as commodities, that still has that tiresome argument about whether or not to legalize prostitution, [a society] that still believes the myth about it [prostitution] being a choice.

The conference had three objectives: to launch the Women’s Shared Trade Alliance, which will bring together small, social businesses allowing them to leverage and market their products more efficiently; to provide a space for people engaged or interested in starting similar programs across the country; and to share best practice models through workshops highlighting those best practices.

“It is tough work, so the idea of networking with other groups and other people who are doing that same work is so important. So we really want the people in Fort Dodge, Iowa, to meet the folks in Rochester, New York, to Dallas, Texas, to southwest Florida,” said Stevens.

“The truth is that once people get to know each other, everyone’s work gets better, the community holds us accountable and holds us up.”

The conference included workshops sessions on topics including “housing first” for adult survivors of trafficking and prostitution, post-traumatic stress disorder and second-stage recovery, interrupting the cycle of supply and demand from a criminal justice perspective, survivors’ stories, and how to replicate the Magdalene and Thistle Farms models. 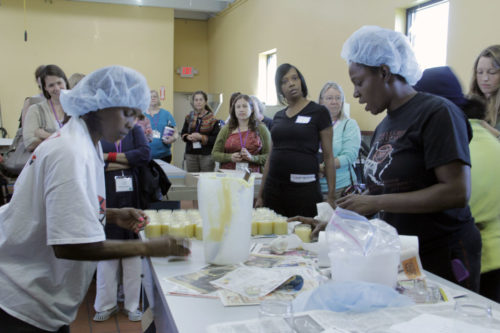 Thistle Farms raises $1 million annually through sales and donations and, as such, is one of the most successful social businesses of its kind in the country. Thistle Farms body care products are sold online and in some 30 Whole Foods markets. Magdalene has helped more than 140 women over the years with a 76 percent success rate.

It works like this: Women live in community together for two years at no cost to them, and after four months, during which time they focus on recovery, they go to work either at Thistle Farms or in the community.

“We are not a halfway house, a recovery center, a transitional center; we are a home, and finally there is no authority in the house, so it’s a communal model of radical hospitality,” said Stevens. “So it comes out of the Benedictine rule, it’s a belief that community really does heal, and that we need to be together without authority but in relationship to get to some of the deepest wounds we know and have the freedom to move forward.”

In addition to housing, Magdalene provides women with financial support, from the moment they walk through the door, and an individualized treatment program, said Cary Rayson, Magdalene’s executive director, during a workshop titled “Housing First for Adult Survivors of Human Trafficking and Prostitution.”

Rayson explained that “housing first” is critical for these women, all of whom have suffered childhood abuse, many at the hands of a family member, and who on average first took to the streets when they were between 14 and 16 years old. “You cannot get people who have been abused, trafficked and have prostituted themselves, you cannot get them to stop, without a place to live,” she said. “You’ve got to have a home before you can get better.”

Magdalene also raises between $75,000 and $100,000 annually through the “john school.” Men arrested for soliciting a prostitute are given the option to attend the john school, where they hear from counselors, prosecutors and from Magdalene graduates who tell their personal stories of abuse that lead them to the streets.

“The john could be your husband, your brother,” he said, adding that, for the most part, the men believe they are having consensual sex between adults. “The purpose of the john school is to educate men.”

On that fateful day in 1996, the police told Mullins if they saw her walking down the strip again, they’d arrest her. She dared them to, and when they didn’t, she bent down, picked up some rocks, “and busted out the windows” of the patrol car. They arrested her, took her to jail, and later she became the fifth woman to enter Magdalene.

“For the first six months, I kept looking for the hook,” said Mullins, explaining she didn’t think Magdalene could possibly be a free program, that women were given a place to live without answering to an authority, and without a catch. “I thought it was too good to be true, you had to give something to get something.”

Since 1997, Magdalene has grown to include four residential homes and two transitional homes, for women who complete the two-year program, but who need additional time to transition to living independently. 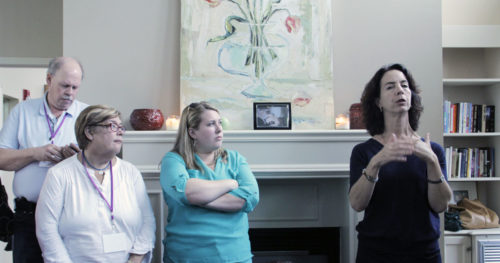 For many, like Shelia Simpkins McClain, who graduated Magdalene in 2007 after spending 22 years on the streets, the first step is to learn how to care for themselves and make positive choices.

“I didn’t come in to get my life back, I didn’t have a life,” said Simpkins McClain, who with nine years of sobriety now serves as Magdalene’s assistant resident manager. “I needed to learn how to live.”

Nicholas Kristof featured Simpkins in his Oct. 13 column in the New York Times about and Magdalene and Thistle Farms.

Cheryl Oliver, executive director of Oasis House, which provides programs and services to women working in strip clubs and on the streets of Dayton, Ohio, attended the conference to network and learn from Magdalene’s and Thistle Farms’ successes.
In her work, Oliver said, she’s noticed a “hierarchy”: women move from strip clubs, where they become addicted to alcohol and drugs, to Backpage.com and then, after they are “used up,” meaning too strung out to work in clubs or find jobs on Backpage.com, to the streets.

“Every one of these women are victims of trafficking,” said Oliver.

In addition to drug abuse, prostitution, and living on the streets, one thing every woman, without exception, who has come into Magdalene has shared is a history of sexual abuse or molestation, said Stevens and Rayson.

Twice a year, over a four-month period, artists work with the women and compile their words, describing the abuse and the traumas they’ve endured in their lives, into a 45-minute performance, delivered both inside the prison and also outside at St. Paul’s Church.

“We sit there in silence, listening,” said Stoner, adding that some of the words are very difficult to hear. “Words they [the women] live with every day.”

The outside performance makes an incredible impact on and challenges the community, Stoner added, saying that through the story project, they have identified the need for a transitional home, a place where women can go following their release from prison, an alternative to being sent back to abusive situations or the streets.

In 2000, the United States enacted the Trafficking Victims Protection Act, which defines sex trafficking as a “severe form of trafficking” in which “a commercial sex act is induced by force, fraud or coercion. Magdalene added the term “trafficking” to its program materials a few years ago.

Recognizing the seriousness of the issue, the 2009 General Convention of the Episcopal Church passed a resolution calling for “the protection of all victims of human trafficking, particularly women and children, providing necessary attention to their physical, psychological and social needs, and using approaches that respect victims’ rights and integrity.”

“This is really some of the most important work the church can do,” said Stevens. “The nice thing that has happened is the Episcopal Church, organically, is really growing this movement.”

The Diocese of Louisiana and the Rev. Mitchell Smith, head of Trinity Church, New Orleans, were instrumental in starting Eden House, a Magdalene sister-community that opened its doors in New Orleans in October 2012; it was an Episcopal church in Charleston, South Carolina, that first opened Magdalene; it’s a woman who interned with Magdalene and became an Episcopal priest and opened a house in Rochester based on this model; and the Very Rev. Mike Kinman, of Christ Church Cathedral in St. Louis, has helped to start Magdalene St. Louis; all of which are advancing the church’s role in this work, Stevens said.

“So slowly but surely it is a movement,” she said. “And really the Episcopal Church needs … to celebrate that it’s been a part of the frontline work working with women who have survived sexual violence and are healing. I think it’s huge.”

Following the Magdalene, Thistle Farms model, Kinman is working with other churches and organizations in St. Louis to create a similar program there.

“When I first came to Christ Church Cathedral, I realized the cathedral could be a catalyst for doing something really important,” said Kinman, who attended the conference and who first met Stevens and became acquainted with Magdalene in 1998.

“This is the closest thing to the Kingdom of God that I’ve ever seen,” said Kinman. “This is the first step in a wider movement.”