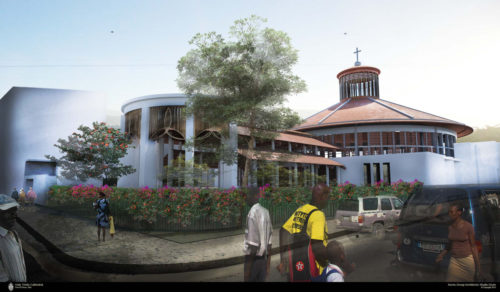 The new Episcopal Church cathedral in Port-au-Prince, Haiti would make a strong statement of hope on a busy corner in the country’s capital, which is still recovering from the 2010 earthquake. Artist rendering: Kerns Group Architects

The new Port-au-Prince cathedral is to be built on the same site as the previous Holy Trinity Cathedral that was destroyed in the 2010 earthquake. It would seat more than 1,200 people, which is more than double its previous size, and include an entry/narthex with a bell tower incorporating the bells that survived the quake; a round, flexible worship space; and a hospitality and administration area. Worshippers would sit in a circular fashion around and above a central altar platform, with the new altar positioned in the exact location of the altar of the previous cathedral.

One of three proposed chapels would house the three surviving cathedral murals from among the 14 world-famous ones that adorned the walls of the previous cathedral depicting biblical stories and religious scenes in Haitian motifs. The ground-breaking paintings, completed in 1950-51, were crafted by some of the best-known Haitian painters of the 20th century.

More than 1,200 worshipers would sit in a circular fashion around and above a central altar platform, with the new altar positioned in the exact location of the previous altar of the previous cathedral. Artist rendering: Kerns Group Architects

The new cathedral is designed to U.S. earthquake- and hurricane-resistance standards, and will be capable of generating its own electricity, providing its own purified water and supplying its own telecommunications. The intent is for it to be self-sufficient in the event of a future emergency and to serve as a safe haven to those in need of help.

Episcopal Diocese of Haiti Bishop Jean Zaché Duracin told the council that all during the planning process there have been “trade-offs between cost, time and scope.”

The bishop said that, once completed, Holy Trinity Cathedral “will be the iconic symbol of the Episcopal Church in Haiti.”

“The first phase of this project is mental,” he said. “The last phase will be physical. We have various skilled people involved in this mental process. We have consulted widely, especially in Haiti and elsewhere for this creative vision. The key to creativity in this project has been to begin with the end in mind, with a vision and a blueprint of the desired result. Today we are presenting that blueprint setting that vision.’’

Duracin asked for council’s continued support of the diocese’s efforts to rebuild.

Presiding Bishop Katharine Jefferts Schori said in an Office of Public Affairs press release that the “resurrection of Holy Trinity Cathedral offers hope to Episcopalians as well as a nation.” 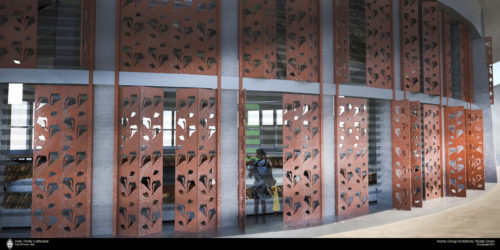 “The former cathedral was a spiritual center for the Haitian people, celebrating the creative spirit of God in a nation born in liberation from slavery,” she said. “Like the people of the Exodus, Haitians know their radical dependence on God, live in hope for a promised future, and celebrate their creation in the image of God through music, dance, the arts, and deeply reverent liturgy.  Their hope-filled witness is a gift of good news to the world. And the world’s partnership in reconstruction is a gift that will bear fruit thirty- and sixty- and a hundred-fold.”

It would take $21 million to build the entire cathedral project – the so-called “Full Vision” – in 2013 and that price could increase to $25 million if it takes three years to build, architect Thomas Kerns of Kerns Group Architects, in Arlington, Virginia, told the council.

“We know we cannot build it right away,” Kerns said.

Thus, the architect said, building will no doubt be constructed in phases with the first being the main worship space. That first phase would cost $15 million, including a three-year cost-escalation amount.

“Those are big numbers,” Elizabeth Lowell, the church’s development officer, acknowledged to the council after the architects’ presentation.

“The beauty of this plan [is that in terms of the costs] we can break them down into manageable financial components for donors,” she said.

Lowell said she has been researching or contacting donors or living relatives of people who donated to the last chapel, as well as cultivating other prospective donors.

She said she is convinced that the money can be raised but that effort will take time. 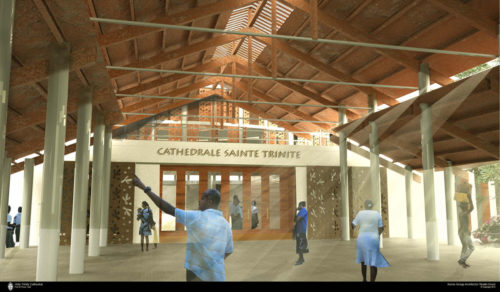 Visitors to the new cathedral would walk under a bell tower housing the bells of the former cathedral, which survived the earthquake, and down a covered walkway to the church. Artist rendering: Kerns Group Architects

The Kerns Group has been working on the design since December 2012 in collaboration with representatives of the Diocese of Haiti, the Episcopal Church Center in New York and Studio Drum Architects of Port-au-Prince, Haiti.

When the choice of architects was announced, Duracin reiterated the importance of rebuilding the cathedral. He said the diocese was “faced with the enormity of rebuilding most of its churches, schools and other structures throughout the earthquake-ravaged region” and decided to concentrate its initial efforts on rebuilding Holy Trinity Cathedral “as a prominent landmark of God’s abiding presence with the Haitian people and the church’s commitment to serve them.” 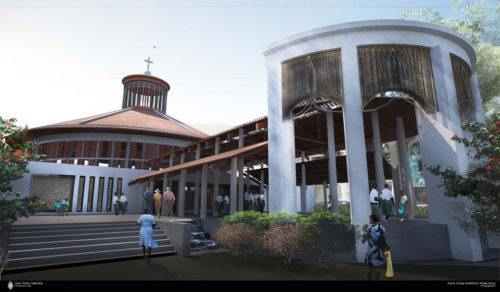 The cathedral’s main entrance court would welcome people with trees and planting, and a stream evoking the rivers that run from the country’s mountains (symbolized by the domed worship space). Artist rendering: Kerns Group Architects

The magnitude-7 earthquake, whose epicenter struck 10 miles southwest of Port-au-Prince at 4:53 p.m. local time on Jan. 12, 2010, was immediately followed by two aftershocks of 5.9 and 5.5 magnitude. Close to 300,000 people were killed. About a third of Haiti’s approximately 9 million people lived in Port-au-Prince at the time of the quake. Of those, 1.6 million people in the capital and elsewhere were left homeless on streets filled with the rubble of 80,000 destroyed buildings.

All 254 of the diocese’s schools have been open since April 2010, serving nearly 80,000 Haitians from kindergarten to university. And all of its churches and other institutions such as medical clinics are operating – albeit many in far less-than-ideal conditions.

Design work for the new cathedral was based on eight “essential elements,” Kearns said, including:

The design, the architects said, reflects two distinct characteristics that give shape to Haitian culture –its mountains and the memory of its lush tropical vegetation. The central dome of the primary worship space evokes the mountain form, while the entrance court includes lush trees and vegetation.

The hospitality/administrative area will include a number of meeting rooms, public restrooms and administrative offices clustered around a two-story atrium. It is thought that some of the space can be leased to outside groups to generate income.

Given the flexible nature of the building, the press release said, the new cathedral could be a prominent center for the performing arts. The Holy Trinity Philharmonic Orchestra, Haiti’s unofficial state symphony orchestra, and the Holy Trinity Music School’s renowned Les Petits Chanteurs men and boys choir were based on the cathedral complex, and are still performing.

Less than six weeks after the devastating earthquake, the Executive Council pledged to stand by the Diocese of Haiti as it ministered to earthquake survivors and planned its long-term rebuilding efforts, while challenging the church to raise millions of dollars to help pay for that rebuilding. The council also said at that time that “Haiti’s recovery and reconstruction must be directed by the Haitian people” and affirmed Duracin’s authority and that of the leaders he appoints “to request and direct the resources required to rebuild the damaged institutions and impacted congregations of the diocese.”

Council did not take any action on the proposal Oct. 15 but it is likely to be discussed in various committee meetings here, and those discussions may result in some sort of statement or resolution by the council.