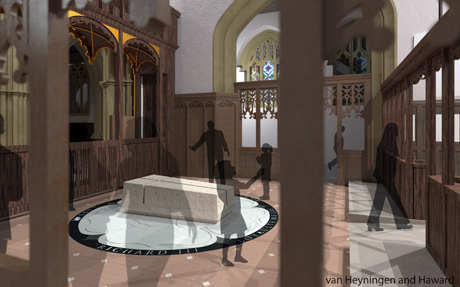 [Anglican Communion News Service] The detailed designs for the tomb of King Richard III were revealed today by Leicester Cathedral, as they seek planning permission for the design. The Cathedrals Fabric Commission for England will review the plans and is expected to make a decision by late October.

The King will have a raised tomb of finely worked Swaledale fossil limestone deeply incised with a simple cross, placed at the center of a rose carved in white limestone, surrounded by a band of dark Kilkenny limestone, in a special area created by re-ordering part of the interior of the cathedral. The top of the tomb is inclined towards the east, as a symbol of the resurrection of the dead.

The name of the King, the dates of his birth and death (1452-1485), his personal motto “Loyaulte me Lie” (Loyalty binds Me) and his “boar” badge will be carved into the dark circular band on the floor around the tomb. The area will be defined by wooden screens, between the new altar under the tower and a new chapel which will be used for private prayer and for regular daily worship.

The site of the tomb is in what is now the chancel of the cathedral, a traditional place of honor. This is equivalent to the position of the King’s original grave in the Grey Friars Priory.

The Dean of Leicester, the Very Rev. David Monteith, said today: “We fully respect the process of the Judicial Review which will ensure the procedure leading to the reinterment is correct. While this takes its course we must, as would any Cathedral in this position, seek planning permission for the detailed and costly changes  which need to be made to the building.

“The overall concept is regal and respectful in its elegant simplicity, as befits the final resting place of a King of England. By placing the tomb in our chancel, we are giving King Richard the same honor as did those friars more than 500 years ago.”

The Bishop of Leicester, the Rt. Rev. Tim Stevens, said: “I am proud to support the cathedral in continuing to progress its responsibility to prepare for the reinterment of King Richard while the judicial process continues. Our cathedral deserves our prayerful support during this exciting and challenging time.”

The improvements to the inside of the cathedral – which include opening up the area directly under the tower – will also create a better experience for the thousands of people expected to visit, leading them through the building, past the tomb area and through various interpretation boards telling the story of the King and the cathedral.

The cathedral site is also being dramatically improved through the Cathedral Gardens project, which will create a new public open space, including re-siting the statue of Richard III now in Castle Gardens and a new piece of artwork funded by the County Council.  This project is currently out to tender and work is expected to start next month.

Phil Stone, chair of the Richard III Society, described the design as “utterly inspired.” He said: “Because of the Judicial Review, the Society must stick by its neutrality. If in two to three months’ time it is clear that Richard is coming to Leicester then I hope this will proceed according to these plans. This design is utterly inspired and if it does not come here, I hope they will do the same thing somewhere else.”

The overall design work has been guided by a project group chaired by the Rev. Canon Mandy Ford, which included representatives from the Richard III Society, the City Council and the University of Leicester. Mandy said: “This design is the result of wide and careful consideration. The architects have responded to our desire for a monument which speaks of the great Christian themes of life, death and resurrection, while marking the resting place of one individual”.

All the designs have now been submitted to the Cathedrals Fabric Commission for England for final approval. The CFCE is the statutory planning body who have to approve all proposed alterations to English Cathedrals. A decision is expected by the end of October. The documents and pictures can all be seen on the website, with a short video from the dean.

The tomb and interior designs were created by the firm of van Heyningen and Haward Architects. The designs were presented to interested groups earlier in the week, including local MPs and Peers, the Richard III Society and the wider Cathedral community. The cost of the reinterment and the reordering of the Cathedral in connection with it will be around £1.3m (US$2.08m). The tomb and vault will cost in the region of £96,000 (US$153,812).