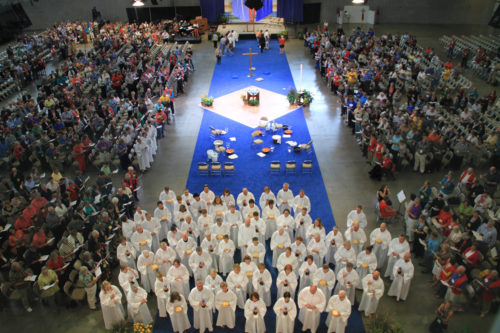 [Episcopal News Service] The Evangelical Lutheran Church in America (ELCA), saying it is committed to supporting a peaceful resolution to the conflict between Israel and Palestine, affirmed that commitment during the recently concluded 2013 ELCA Churchwide Assembly in Pittsburgh.

The churchwide assembly, the chief legislative authority of the ELCA, met Aug. 12-17 at the David L. Lawrence Convention Center. The theme for the assembly was “Always being made new.” This year marks the ELCA’s 25th anniversary.

Voting members considered a series of proposals — known as memorials — from the ELCA’s 65 synods. With an 812 to 45 vote, voting members approved a memorial designed to continue this church’s awareness-building, accompaniment and advocacy on behalf of peaceful resolutions in the Middle East.

The action commits the ELCA to learning more about the experiences of both Palestinians and Israelis and their mutual fears, aspirations and hopes; work to convey the concerns and perspectives of Israelis and Palestinians that dispel stereotypes and caricatures and promote better understanding; lift up the voices within both communities, especially those of victims of violence, that seek peace with justice through nonviolent responses to the conflict; continue to help alleviate the humanitarian needs; support U.S. funding that promotes peace and cooperation for all parties; and to continue to pray for brothers and sisters in the Middle East and for the Evangelical Lutheran Church in Jordan and the Holy Land.

The action also calls for evaluating possibilities for investing in specific Palestinian economic endeavors and other projects that would promote peace and cooperation between Israelis and Palestinians; and to provide a report with recommendations to the April 2014 meeting of the ELCA Church Council.

Prior to the churchwide assembly, ELCA Presiding Bishop Mark S. Hanson joined 29 other Christian, Jewish and Muslim leaders in a letter to Secretary of State John Kerry welcoming his “announcement on July 19 that agreement has been reached ‘that establishes the basis for resuming direct final status negotiations between the Palestinians and the Israelis.'” The leaders said they “are committed to mobilizing broad public support for active, fair and firm U.S. leadership for peace,” offered their prayers for his efforts and said they are prepared “to activate members of synagogues, churches and mosques across the country to support bold American leadership.

Other memorial topics considered at the 2013 ELCA Churchwide Assembly included:

In other action, the assembly:

For the first time at a churchwide assembly, the 952 voting members used tablets to receive and organize all of their legislative materials. The so-called Guidebook was available as an application for members with iPads and iPhones, Android tablets or Amazon Kindle Fires. Those members who did not own a tablet were provided with a free rental device. The church estimated that it saved 500,000 pages of paper. The Episcopal Church’s General Convention Office has said that during the 2015 gathering laptops, tablets, smartphones, and video monitors will be the primary media of legislative materials, and for the first time, there will be no large, dedicated print shop.

The ELCA has more than 4 million members in nearly 10,000 congregations across the 50 United States and in the Caribbean region. The church was formed from three separate then-existing churches: the American Lutheran Church, the Association of Evangelical Lutheran Churches, and the Lutheran Church in America.

— The ELCA News Service contributed to this report.