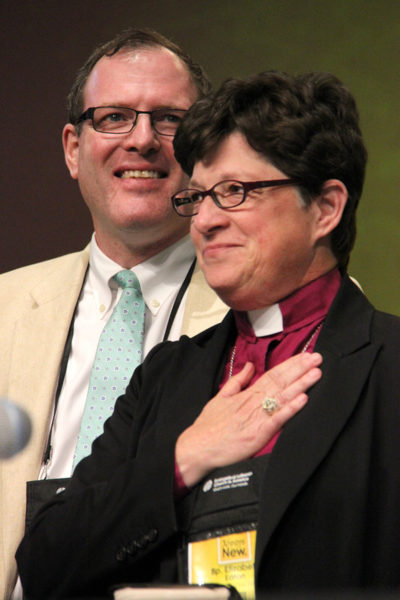 [Episcopal News Service] The Rev. Elizabeth A. Eaton was elected Aug. 14 as presiding bishop of the Evangelical Lutheran Church in America (ELCA). She was elected on the fifth ballot at the 2013 ELCA Churchwide Assembly meeting Aug. 12-17 in Pittsburgh.

Of the 889 votes cast, 445 votes were needed for an election. Eaton received 600 votes and the Rev. Mark S. Hanson, ELCA presiding bishop for the past 12 years, received 287. Eaton is the first female to be elected as a presiding bishop of the ELCA. Three out of the four nominees were women.

“We are a church that is overwhelmingly European in a culture that is increasingly pluralistic. We need to welcome the gifts of those who come from different places, that is a conversation we need to have as a church,” Eaton told the assembly shortly after the election.

Eaton currently serves as bishop of the ELCA Northeastern Ohio Synod. Prior to becoming synod bishop, she served as pastor for ELCA congregations in Ohio. She earned a Master of Divinity degree from Harvard Divinity School in Cambridge, Massachusetts, and a bachelor’s degree in music education from the College of Wooster in Wooster, Ohio.

Eaton is married to the Rev. Conrad Selnick, an Episcopal priest who is rector of St. Christopher’s by the River Episcopal Church in Gates Mills, Ohio.

According to the Pittsburgh Post-Gazette, Eaton “is considered a moderate who supported the denomination’s decision to allow partnered gay clergy while allowing room for churches to disagree.”

Eaton’s six-year term as presiding bishop will begin on Nov. 1.

The Episcopal Church and the ELCA have since 2001 enjoyed a full communion relationship, known as Called to Common Mission, through which the two churches are committed to finding opportunities for combined mission and disaster relief efforts, planting new ministries together, joint congregations and shared personnel. Eaton is a member of the national Lutheran-Episcopal Coordinating Committee, which implements the full communion agreement.

Jefferts Schori said she has learned much from Hanson’s “prophetic and gifted evangelical ministry, and I pray that the next chapter of his ministry may be a rich blessing to him, his family, and many others.”

Jefferts Schori said she now looks forward to working with Eaton “as we grow in our Call to Common Mission. There are excellent foundations already in our common work, and I expect further growth as we seek to serve God’s mission as ministers of justice and healers of the breach. I anticipate a journey of mutual discovery of the gifts God so richly bestows on our two Churches, particularly in new contexts and populations. May God bless the journey and may God bless the pastoral leadership of Bishop Eaton.”

The Rev. Margaret Rose, the Episcopal Church’s ecumenical and interreligious deputy, echoed the presiding bishop’s comments. “We are grateful for the more than 10 years of partnership with Presiding Bishop Hanson and our Call to Common Mission and look forward to the ‘new things’ the Holy Spirit will send as we deepen that work with Presiding Bishop-elect Elizabeth Eaton.”