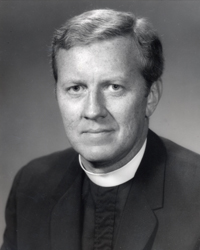 He retired to the Blue Ridge Mountains of Virginia in 1985 to Greenwood near Charlottesville, to a circa 1799 farmhouse on 32 acres of hardwood and meadow. He returned to Maryland in 1994, residing in Annapolis. Bishop Leighton moved to Fairhaven Retirement Community, Sykesville, in 1999 with his wife, Carolyn, until his death.

Leighton’s funeral is set for 10:30 a.m. EDT Aug. 10 at Cathedral of the Incarnation in Baltimore.

He was consecrated bishop coadjutor on Nov. 30, 1968, at Emmanuel Church, Cathedral Street, Baltimore, and served for three years until becoming bishop diocesan at a medieval festival institution celebration in January 1972 at the Interfaith Center in Columbia. It was an innovative experience with balloons, youth as clowns, much music and a photo slide show.

He served as archdeacon of Maryland 1964-1968 under Bishop Harry Lee Doll. Prior to that he was the rector of the Church of the Holy Nativity, Forest Park, northwest Baltimore, beginning in 1959.

A native of Pittsburgh, Bishop Leighton earned his Bachelor of Science degree in 1947 from Northwestern University and embarked upon a career with General Motors Corp. as assistant employment manager at Fisher Body’s Pittsburgh stamping plant. During World War II he was sergeant major of Headquarters Ninth Air Force, serving on General Brereton’s staff, for three years where he was awarded the Presidential Citation; and six battle stars for service in the China-Burma-India Theatre; the European-Middle Eastern Theatre; and the American Theatre.

At the age of 32 he gave up his position at Fisher Body to begin a new life in the priesthood of the Episcopal Church. After attending the Virginia Theological Seminary, he was ordained to the priesthood in 1955. Following his ordination he served two churches in Pittsburgh: Calvary in East Liberty, and as rector of St. Andrew’s, Highland Park. He moved to Baltimore in 1959. The seminary awarded him the Doctor of Divinity degree in 1969.

Probably his most controversial act as bishop of Maryland was ordaining a woman, Phebe McPherson (née Coe), to the priesthood in December 1977, the first in the Episcopal Diocese of Maryland. Bishop Leighton wore a pair of striped wool socks to the ordination so that he “didn’t get cold feet.”

Signaling a monumental transition in style and vision during his episcopacy, Leighton possessed organizational skills from his days as a business executive, along with a vision of a modern, inclusive church. His commitment to ecumenical relations, Book of Common Prayer and Hymnal revisions, and the ordination of women reflected these visions.

Bishop Leighton was one of the founders of Columbia Cooperative Ministry in the new town of Columbia and the first president of its congress; one of the founders and past-president of the Episcopal Church’s deployment office; co-founder with Cardinal Sheehan of the Interfaith Council of Baltimore; chair of the board of Uplands Home in Ten Hills; president of Chase Home in Annapolis for 14 years; served for 10 years on the board of the Ecumenical Institute of Theology at St. Mary’s Seminary, Baltimore; president of the Corporation for the Relief of Widows and Orphans of the Episcopal Diocese of Maryland, and its vice president and agent 1986-1996; and, one of the founders of the Westminster-Canterbury of the Blue Ridge Retirement Community in Charlottesville, Va.

He is survived by his wife of 68 years, the former Carolyn Smith, and three children: daughter Charlotte Leighton of Ft. Collins, Colorado; son David K. Leighton Jr. of Soquel, California; and daughter Nancy Koenig, wife of Harold Koenig, of Scottsville, Virginia; in addition to five grandchildren and four great-grandchildren.

Read about Bishop Leighton’s work in his own words in The Culture is Changing (http://www.ang-md.org/leighton-mcn.pdf) (Maryland Church News, Summer, 2006)