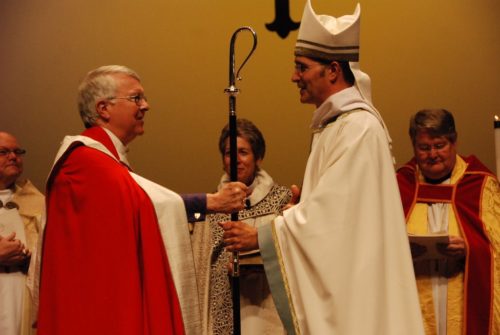 Bourlakas comes to the diocese from the Christ Church Cathedral in Louisville, where he has served as dean since 2007. In March, he was elected from a field of five nominees to lead a diocese of 56 parishes; he succeeds the Rt. Rev. Neff Powell, who retires after 17 years as bishop and will be retiring in Oregon, close to family, with his wife Dorothy Powell.

Bourlakas received his bachelor of arts and his doctor in ministry from The University of the South in Sewanee and his master of divinity from Seabury Western Theological Seminary. He moves to Virginia with his family: his wife Martha Bourlakas and their daughters Hannah, Sarah and Elizabeth.

“There’s a great opportunity for The Episcopal Church right now,” said Bourlakas in an earlier interview for Epiphany, the diocese quarterly. He emphasizes the importance of mission, and of reaching out to the millennials: “How do we have people come to our church from other traditions, and how do we keep our people here, and how do we be more inclusive?

“For the past 20, 30 years we have attracted people who were already religious. The church that bishops are now inheriting is a totally different church. It’s a post-Christian America, and people no longer know the difference between a Presbyterian and a Methodist and an Episcopalian. Only about a quarter of the country even goes to church anymore, and the biggest numbers are in the south…

“We will have to be more mission-focused – reaching out to people who not only don’t know the Episcopal Church – they also don’t know Jesus.”

The consecration was part of a celebration lasting several days. On July 19, Presiding Bishop Katharine Jefferts Schori presided at a Eucharist at Christ Episcopal in Roanoke prior to lunch with clergy and clergy spouses and partners.

That evening, the youth of the diocese hosted the Bishops’ Bash, attended by the presiding bishop, Powell, Bourlakas and Church of England Diocese of Bradford Bishop Nick Baines. The cheers after the introductions of each bishop sounded not unlike the cheers for visiting rock stars.

Starting at 8:30, everyone, including the bishops, pitched in to pack 16,500 meals through Stop Hunger Now for South Sudan, with live music. The youth presented the bishop-elect with gifts including a walking stick, as an invitation to walk with them on their journey, and a hammer used during the Appalachian pilgrimage he joined them during the previous week.

On July 20, music by flute choir, handbells and St. John’s Episcopal’s Gathering Band preceded the service, which began at 11:00 in the morning. A total of 26 bishops attended, as well as representatives from the Monacan Indians and other religious leaders from the community.

Jefferts Schori was chief consecrator; co-consecrators were the Rt. Rev. Michael Curry, bishop of North Carolina, and the Rt. Rev. J. Neil Alexander, dean of the School of Theology at The University of the South and former bishop of the Diocese of Atlanta. Other official consecrating Bishops included the Rt. Rev. Heath Light, fourth bishop of Southwestern Virginia.

The Rt. Rev. Terry Allen White, bishop of Kentucky, Bourlakas’s previous dicoese, preached the sermon, and spoke on the role of bishops as “bridge-builders,” a theme the presiding bishop had touched on during a roundtable discussion the day before, referring to an older term for bishop, pontifex.

“A bridge-builder creates unity,” said White, by building those bridges “between young and old, rich and poor, a diversity of cultures, people of faith and people who profess no faith.

“There is a tremendous breach… between the body of Christ that too often treats culture as an enemy, and the culture, who doubts that the church is a force for good.”

White said that the people of the diocese “have rightly given thanks for the journey you have walked and share with Bishop Powell and now take your first steps with Bishop Bourlakas.”

“It’s a journey, it’s a march, with an intentional path to take – it is indeed a pilgrimage that all God’s people must be about.”

Sarah Bourlakas served as Old Testament lector in the consecration, and all of the family vested the new bishop after his vows. Powell gave Bourlakas his crozier, carried by the bishops of the diocese since 1960.

The diocese has long-standing relationships with the Diocese of Bradford (since 1977), and the Province of the Episcopal Church of Sudan (since 1982). Baines and the Very Rev. Jacob Panchol Majok, a priest from the Diocese of Renk in southern Sudan, attended and served as bread bearers during communion.

The Consecration Planning Team was headed by the Rev. Sandy Webb, associate to the rector at St. John’s Episcopal, Roanoke. Webb’s last day in Roanoke was July 20 as he was called to serve as priest-in-charge at Church of the Holy Communion in Memphis. The Rev. Shelby Owen, priest-in-charge of Emmanuel Episcopal in Staunton, Va., served as vice chair.

Many of the consecration elements held significance: The youth of the diocese painted images of the mountains on one of the lecterns. The bishop’s pectoral cross was carved by an artist in the Diocese of Bradford from oak dating from before the American Revolution. Four potters from the diocese created vessels for communion.

David Charles Campbell, minister of music at St. John’s, Roanoke, coordinated music along with a team of musicians from the diocese. More than 160 singers from throughout the diocese formed a mass choir, accompanied by organ, brass quintet and percussion.

The music following the liturgy reflected the heritage of the region: Bagpipers played outside after the consecration, and many of the guests remained for a reception at the Roanoke Civic Center (which houses the Performing Arts Theater), with a bluegrass band and a special presentation by Roanoke Mayor David Bowers, who presented Bourlakas with the key to the city.

On July 21, the presiding bishop preached and presided at St. James, Roanoke; Baines at St. Paul’s, Salem, and Bourlakas, made his first visitation at St. Elizabeth’s, Roanoke, beginning his tenure in the mountains of Virginia.