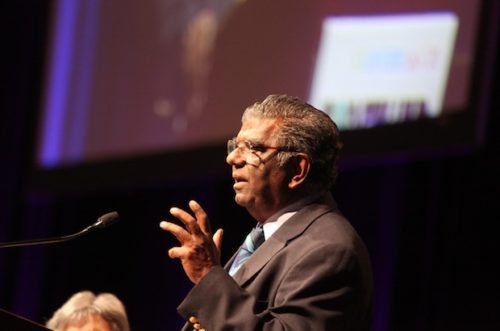 Dr. Christopher Duraisingh told Joint Assembly not to be afraid to be “in love together for the love of the world.” Photo: Art Babych

[Anglican Journal] On the final morning of Joint Assembly, imminent theologian Dr. Christopher Duraisingh, who was the keynote speaker, told the Anglicans and Lutherans that he  had sometimes turned the words from the assembly’s theme, “Together for the Love of the World,” around in his mind to be “Together in Love for the World.” He asked them to consider the idea of being “in love” in this way.
Duraisingh, a professor at the Episcopal Divinity School in Cambridge, Mass., attended sessions throughout the integrated meetings of the Anglican Church of Canada’s General Synod and the Evangelical Lutheran Church in Canada’s national convention. He said he had witnessed the ways that the members had inspired and challenged one another, and there were visible demonstrations that mission is a love affair.

Will that love grow significantly? he asked. Others observing, “Look how the Anglicans and Lutherans love one another” would be a powerful witness to the world, he suggested.

Referring to James Cone’s book, God of the Oppressed, he spoke about how love draws people out of their own subjectivities and stories, and helps us listen and connect with others. Duraisingh acknowledged that in this course of the assembly there were also instances where people were not able to listen to each other. “It is only when we refuse to listen to another’s story that our own story becomes ideological, a closed system incapable of hearing the truth,” he said.

Quoting Asian theologian C.S. Song, Duraisingh said that “Christian mission in essence should be a love affair of the church with other human beings with whom God has already fallen in love…Christian mission is God’s mission, learning to love.”

During the five-day assembly, Duraisingh said he heard people talk with sadness about being a small church or having dwindling numbers, thinking that if the church were stronger, larger or had more investment, things would be better. But biblical narratives, he said, and story after story from the 2,000 years of the church’s history showed something different. “When people are able to rejoice in the midst of the minority status, in the midst of weakness, God has turned their life around for the life of the world,” he said.

He closed with a thought from a Faith and Order Commission gathering in 1994, which he said expressed his wish and prayer for the churches. “As we begin to strip ourselves of false securities, finding in God our true and only identity, daring to be open and vulnerable to each other, we’ll begin to live as pilgrims on a journey,  discovering the God of surprises who leads us into roads which we have not travelled and we’ll find each other’s true companion on the way.”

Duraisingh offered his own blessing for the members as they prepared to close Joint Assembly and return to their homes and parishes across the country: “May the God of surprises lead you in the journey you have undertaken together for the love of the world.”